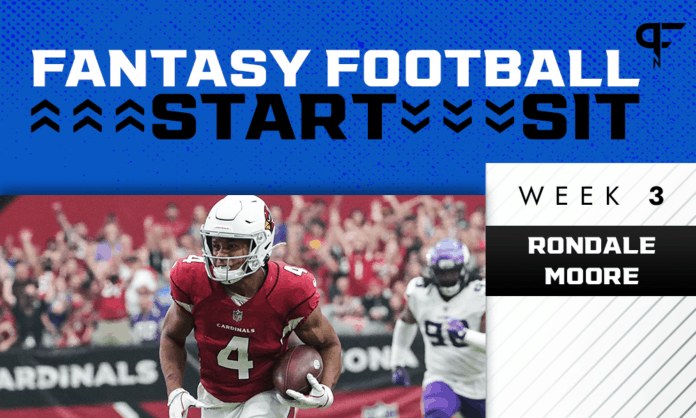 Rondale Moore's fantasy value skyrocketed after Week 2, but should you trust him in your lineup this week against the Jaguars?

By Andrew Hall
September 26, 2021
What's in this article? Click to show
Rondale Moore’s impact on the Cardinals so far
Week 1 against Tennessee
Week 2 against Minnesota
Should you start Moore Week 3 against Jacksonville?

Rondale Moore’s impact on the Cardinals so far

To dissect Moore’s terrific 2021 season thus far, we first need to discuss PFN’s Offensive Value Metric (OVM). This score is a measure of a player’s individual value to the offense. Think of it as a way to show how important a player was to his team’s offensive production.

Generally speaking, it’s tough to compare players using this metric because each offense is so different. You can’t say that someone mattered more to their offense than someone else. This is especially true when comparing players at different positions. That’s just not how it works.

That being said, seeing where a player falls in relation to others within their position can be helpful. It can help identify players that are generally more important to their own teams’ success. For fantasy, that kind of information can be somewhat predictive. Good players tend to earn more opportunities. Players that make an impact tend to be targeted more in their offenses.

Through two weeks, Moore’s OVM score is 49.24. This ranks third at the position, only behind Eagles WR Quez Watkins and Browns WR Jarvis Landry. Also in the top 10 at WR are K.J. Osborn, Tim Patrick, Cooper Kupp, and DJ Moore — all of whom have already made an impact at WR and should be rostered in all leagues, just like Moore.

But let’s break down Moore’s numbers a little further to see what we can learn.

The first game of Moore’s rookie year against the Titans was relatively quiet. Moore played only 20 snaps, 29% of the total, and caught 4 of 5 targets for 68 yards. His longest catch went for 29 yards. It might not look like much if you just look at the box score, but his OVM tells a different story.

Moore scored a 48.84 OVM in Week 1, trailing only Landry. This means that out of all of the wide receivers who got 5 targets that week, Moore had the second-most impact on his team. He was targeted on 25% of his snaps in his first career game. That’s not something that we should ignore.

Instead of focusing on Moore after Week 1, everyone was talking about WR Christian Kirk. He played almost twice as many snaps at 39, or 57% of the total, and caught all 5 of his targets for 70 yards and 2 TDs. Kirk scored a 45.61 OVM, the fifth-highest total of the week. Veteran DeAndre Hopkins was next on the team with a score of 37.77.

Kirk had the best week for fantasy, but Moore quietly had the best week amongst the receivers. It may sound counterintuitive, but that’s just what the numbers tell us. Moore’s snap share, yards per catch, and OVM score all prove that he was a stud in his first week as a pro.

After beating the Titans, the Cardinals faced the Vikings in Week 2. In this game, Moore went off. He caught 7 of 8 targets for 114 yards and a touchdown. The catch? He did this while only getting 8 more snaps. Those 28 snaps equal a 45% share, a significant increase.

What also increased was Moore’s impact on his team’s production. Moore’s OVM went up to 51.54, coming in second amongst WRs once again. The only other Arizona receiver who qualified with 5 targets was A.J. Green, who scored a 28.07 OVM score.

Once again, Moore dominated the game without even seeing half of the team’s snaps. Unlike Week 1, this time he did it loudly, and everyone took notice. Moore made his presence known as the top option, both in terms of fantasy output as well as the numerical metrics.

Should you start Moore Week 3 against Jacksonville?

Fantasy managers ran to the waiver wire to add Moore where they could. If you were one of the lucky ones to get him, you may now be asking yourself if he’s worth starting for Week 3 against the Jaguars. Obviously, that requires more context.

It’s clear — when Moore is on the field, QB Kyler Murray looks his way. On the season, Moore has 13 targets, most on the team. He also has 182 total yards (most on the team) and 1 more yard than RB Chase Edmonds. He’s clearly a viable option for fantasy, but whether or not he should start ultimately depends on who you’re benching.

For me, if I had acquired Moore this week, I’d seriously consider starting him over players like Marquise Brown, Sterling Shepard, and Marvin Jones Jr. I think Moore’s upside warrants significant consideration as a WR3/flex play. This means he should see a large portion of lineups, including yours. He’s got a high ceiling and what I think is a high floor, so starting him is likely the right move for you in Week 3.