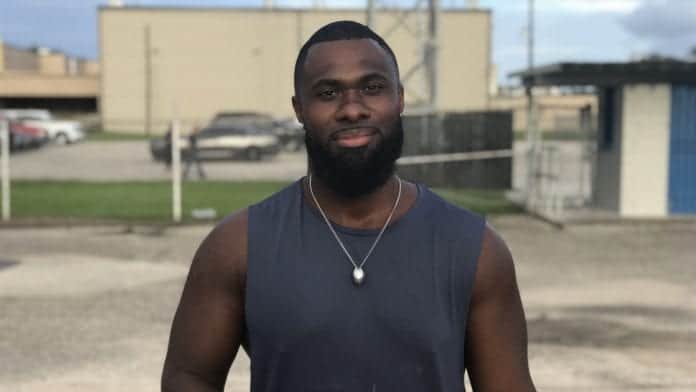 The NFL Combine takes place later this month, and it represents the busiest time of the year for top football trainers like Rischad Whitfield. Here's how Whitfield turned a passion into a career, working with some of the world's elite athletes on a yearly basis.

Often operating in relative anonymity, NFL trainers work vigorously behind the scenes to prepare their clients to compete at the highest level. While this has typically become commonplace around the NFL, perhaps no one gets more overlooked than trainers preparing clients for their biggest test of the year: The NFL Scouting Combine. This is the story of Houston-based trainer Rischad Whitfield, who turned his passion for football into a career as a top football trainer.

Rischad Whitfield discovered a passion for the game of football at a young age.

Growing up in Houston, Texas, a city well-known for its affinity towards the sport, much of Whitfield’s youth was invested in the gridiron. In fact, he played all the way through high school, despite battling through numerous injuries along the way.

Though he was without a scholarship, Whitfield was intent on extending his football career, and walked on at the University of Houston in 2001. The results, unfortunately, were more of the same, as the talented defensive back endured another slew of injuries; he ultimately decided to walk away from the game for good following an injury-riddled freshman campaign. While his playing career may have ended prematurely, Whitfield unearthed a profound interest that year, one that would later prove to alter the course of his life.

“Just the study of the movement of the body — I don’t know, there’s just something about it,” Whitfield said. “The [defensive backs] coach that I had at the time, he was really big on movement. He used to stress the importance of cone drills, and how the ladder works your feet.”

After graduating with a B.A. in kinesiology from the University of Houston in 2005, Whitfield ventured into the world of personal training. Operating out of Life Time Fitness in Houston, Whitfield spent years tirelessly working to develop the next generation of talent. When he didn’t have any kids to train, he would work on his own, focusing primarily on foot-speed and agility on an unassuming grass field near the training facility. When he couldn’t use the grass field, Whitfield utilized various middle schools, high schools — even a grocery store parking lot — to ensure he was putting in daily work to improve his craft.

Though Whitfield realized his passion for enhancing fast-twitch muscles for optimal performance years earlier, it was a certain NFL player that he credits for inspiring him to turn his passion into a career.

“[Chad] Ochocinco inspired me,” Whitfield said. “He’s not the biggest, he’s not the fastest, but dudes couldn’t cover him; they were scared of his feet. You watch videos of Ochocinco back in Miami Gardens working out — quick cone drills, quick ladder drills, a lot of stuff that works his feet. Footwork is the foundation.”

Before long, kids began to join Whitfield for his on-field work. What initially started out as a seven-man contingent comprised of nine and ten year olds gradually began to grow after the first year. Early on, Whitfield worked out of his truck, and was never without a bag of cones, multiple ladders, and a notebook to log his appointments.

Known as an innovator, Whitfield’s unique methods, contagious energy, and unparalleled passion eventually caught the attention of Division I athletes and NFL players.

“Instagram is what got me everybody,” Whitfield acknowledged. “That was where people started seeing my work.”

In the years that followed, there wasn’t a day that went by where Whitfield wasn’t doing something football related to better himself or his clients. Whether it was field work by himself under the blistering Texas sun or countless hours of film study, Whitfield dedicated himself to becoming the best in the business.

Building a steady following as one of the premier trainers that specialized in foot-speed and functional creativity, Whitfield was dubbed ‘The Footwork King’ by an old coach.

Whitfield’s hard work and persistence eventually landed him his own facility in Houston, Blitz Football Camp.

Shortly after opening its doors in 2013, Blitz Football Camp became known as a hotbed for improving next-level football talent. Though the majority of the training takes place during the NFL’s idle months (January through July), the regimented Whitfield is seemingly always on the move.

His day typically begins with a 6:00 A.M. workout with trainer Francisco Martenez at Iron Will Sport Performance Training. During these sessions, Martenez places an added emphasis on functional training and stretching, in order for Whitfield to be at peak performance for his rapidly growing list of clients.

Following his morning routine, Whitfield typically arrives at Blitz Football Camp between 12:00 and 1:00 P.M., where his weekly schedule consists of hour-long training sessions from 3:00 to 8:00 P.M. Monday through Friday, and from 9:00 A.M. to 2:00 P.M. on weekends. After attentively planning out the days’ work, he puts himself through a rigorous on-field workout of his own.

Regardless of whether they’re an All-Pro, first-team All-American, five-star recruit, or a two-star recruit, Whitfield demands maximum effort each and every session. It is understood that anything less than their best will not be tolerated. He challenges his clients to match his intensity, while earning their respect by distinguishing himself from most personal trainers.

“I don’t function properly without doing the work myself,” Whitfield said. “Every time you ever see any videos of me, I have my cleats on — because I have to go do it myself. I’m a ‘lead by example’ type of person.”

In the coming weeks, Whitfield’s primary focus will be preparing Lamb, Chaisson, Delpit, Davis, and Cleveland for their on-field work at the 2020 NFL Scouting Combine.

Lamb, who has been training with Whitfield since tenth grade, is widely regarded as the top pass catcher in the 2020 NFL Draft. A physically imposing receiver, Whitfield works with Lamb on releases and transitioning in and out of breaks in as few steps as possible.

“CeeDee plays angry; he’s very competitive, and has great high-point skills,” Whitfield said. “He’ll attack the defender when he runs his route, and he attacks the football in the air. He just plays with a lot of emotion.”

Cleveland, who didn’t see the ball all that much at Florida, is gifted enough to become a top receiver on an NFL team. Though he mustered only 79 collegiate receptions, the former Gator made a strong impression at the Reese’s Senior Bowl, showcasing his long speed and innate skill of tracking the football.

Davis started his training in ninth grade, and has improved by leaps and bounds under Whitfield’s tutelage. The ascending pass-catcher also had the luxury of being mentored by the likes of Andre Johnson and Emmanuel Sanders over the years.

Davis’ fluidity in and out of his breaks, knack for creating space with his feet, ability to manufacture yards after the catch, and innate understanding of coverages — coupled with what is expected to be a strong showing at the NFL Scouting Combine — should prompt a rise up draft boards.

“The reason why guys like Quartney don’t have a problem beating press coverage, is because everything I do [defensive back] wise mimics that,” Whitfield said. “If a [defensive back] cannot get to the same spot Quartney gets to, they’re beat.”

While the NFL Scouting Combine is a major component in the pre-draft process, the real work begins when the prospects return to Blitz Football Camp in early March, where Whitfield will hone in on position-specific details to set the promising crop of talent up for success at the next-level. Wide receivers, for instance, will primarily focus on release work.

Though it took years for Whitfield to ultimately turn his passion into a career as a top football trainer, working with some of the world’s elite athletes, his work ethic was always unmatched, his energy remained consistent, and his message never wavered:

“I tell the guys all the time,” Whitfield said, “just getting up to go train, that won’t get you better. But, when you laser-in on a specific goal, they’ll see themselves skyrocket past any competition.”