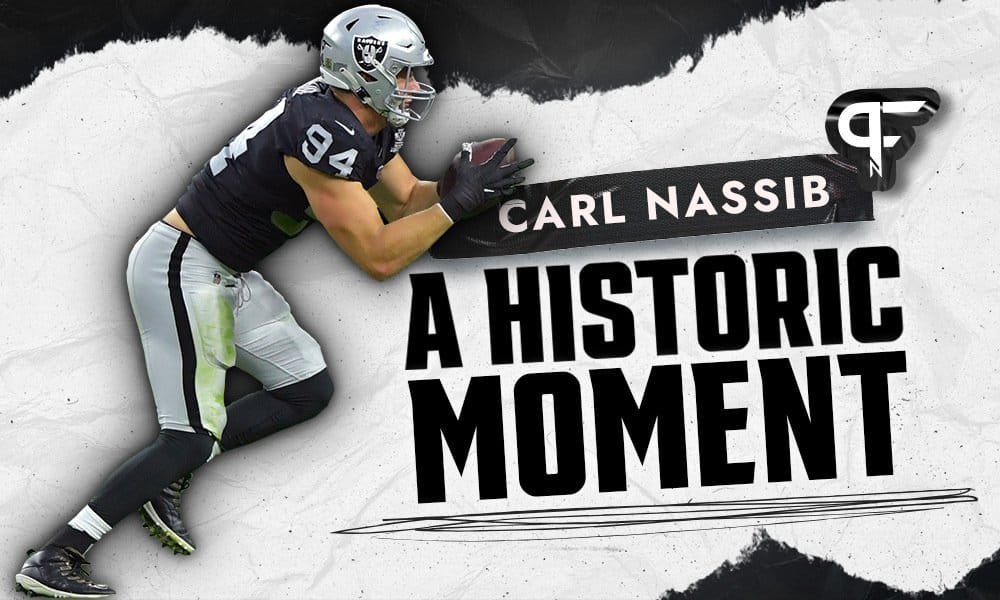 By Dalton Miller
June 22, 2021
What's in this article? Click to show
Why Carl Nassib coming out is so important
The Trevor Project
The announcement signifies progress

Carl Nassib is the first active NFL player to come out as gay. In a career spanning five years, three teams, and 20.5 sacks, this is easily the most impactful thing he’s done. The NFL, players, and fans showed overwhelming support on social media after the video was released.

The Raiders tweeted encouragement from their account saying how proud they were of Nassib, with the screenshots from his statement on Instagram. The Chargers social account quote tweeted saying, “some things are bigger than a rivalry.” Saquon Barkley, Nassib’s college teammate, also reached out to show respect. Roger Goodell made a statement on behalf of the entire NFL.

“The NFL family is proud of Carl for courageously sharing his truth today. Representation matters. We share his hope that someday soon statements like his will no longer be newsworthy as we march toward full equality for the LGBTQ community. We wish Carl the best of luck this coming season.”

In addition to the outcry of support from those mentioned above, PFN’s Chief NFL Analyst Trey Wingo also had discussed what this means for the NFL in the video embedded above (and also here on the PFN YouTube Channel).

All that said, unfortunately, homophobia still very much exists. And in a sport like football, even less than 10 years ago, folks weren’t trying to hide it. But many brush off this news by saying, “Why should I care? I don’t care what a player’s sexual preference is.”

This is not about you unless it is. And if it is, this is a massive development.

Why Carl Nassib coming out is so important

Everybody needs role models in their lives. I don’t think that anybody would argue that. So at that most basic level, we should be able to calculate why this could be very important to a large group of young people. This matters so damn much because representation matters. Carl Nassib is the FIRST active NFL player to do this. He is the FIRST example of a potential role model for young LGBTQIA+ football players.

Now, that statement is not meant to discount in any way what others have done for the LGBTQIA+ community by coming out after their careers. It’s also not meant to take away Michael Sam’s integral contribution, who was drafted as an openly gay player by the St. Louis Rams in the 2014 NFL Draft. And although Sam never played on Sundays in the NFL, he laid the foundation for gay athletes in the NFL.

“Carl Nassib, thank you for owning your truth and especially your donation to the @TrevorProject. LBGTQ people are more likely to commit suicide than heterosexuals. I hope and pray people will take note to this. Thank you again, Carl, and I look forward to seeing you play on the field.”

Nassib’s own words are another reason why this is so important.

“Sadly, I have agonized over this moment for the last 15 years. Only until recently, thanks to my family and friends, especially Connor, Carson, and Francis, did it seem possible for me to say publicly and proudly that I’m gay. I am also incredibly thankful for the NFL, my coaches, and fellow players for their support. I would not have been able to do this without them. From the jump, I was greeted with the utmost respect and acceptance.”

Nassib discussed his contribution to The Trevor Project in the video above. The Trevor Project is the “leading national organization providing crisis intervention and suicide prevention services to lesbian, gay, bisexual, transgender, queer & questioning youth.”

As a U.S. Army veteran, I know the Veterans Crisis Hotline by heart. Hopefully, Nassib’s announcement reaches anybody and everybody in need of crisis intervention. Representation is important.

Because Nassib used his platform to provide a megaphone for the organization, some youth in the LGBTQIA+ community saw The Trevor Project for the very first time. So, not only did Nassib become a representative of the community, he offered resources for those going through immense personal strife. That is another reason why Nassib announcing he’s the first gay NFL player is important.

It’s not about you unless it is.

Nassib continued, “I feel an immense responsibility to help in any way I can – and you can too. Studies have shown that all it takes is one accepting adult to decrease the risk of an LGBTQ kid attempting suicide by 40%. Whether you’re a friend, a coach, or a teammate – you can be that person.”

Publisher’s Note: A portion of the ad revenue generated from this story will be donated to The Trevor Project. PFN is proud to follow Carl’s lead in supporting the LGBTQIA+ community. If you would like to donate to the Trevor project, click on the following link: Trevor Project donations

Nassib finished, “Lastly, I hope everyone can understand that I am just one person. I am a lanky walk-on who is living his dream. I only have a small window to achieve greatness in my sport and I owe it to my team, coaches, and Raider fans to be completely locked in and at my best for the upcoming season.”

Hopefully, this is a springboard for other professional athletes to feel comfortable enough to come out as well. Nassib is a quiet professional. He has 46 Instagram posts. If he has a Twitter or Facebook, I couldn’t find them.

Nassib said that he hopes that videos like his and the coming out process are no longer necessary. The bravery and self-love he displayed in his video coming out as the first gay NFL player transcends the main topic, especially for young people. So many people do not feel comfortable in their own skin. Whether it be anxiety, depression, race, or sexuality, Nassib’s laid-back style might help people live and speak on whatever their truth may be.

Nassib will quietly go back to work to be the best defensive end he can be. And, like every NFL player around, he’ll spend time on the side contributing to a cause. Except his will be different. And as Raiders’ head coach Jon Gruden said of Nassib, “What makes a man different is what makes him great.”