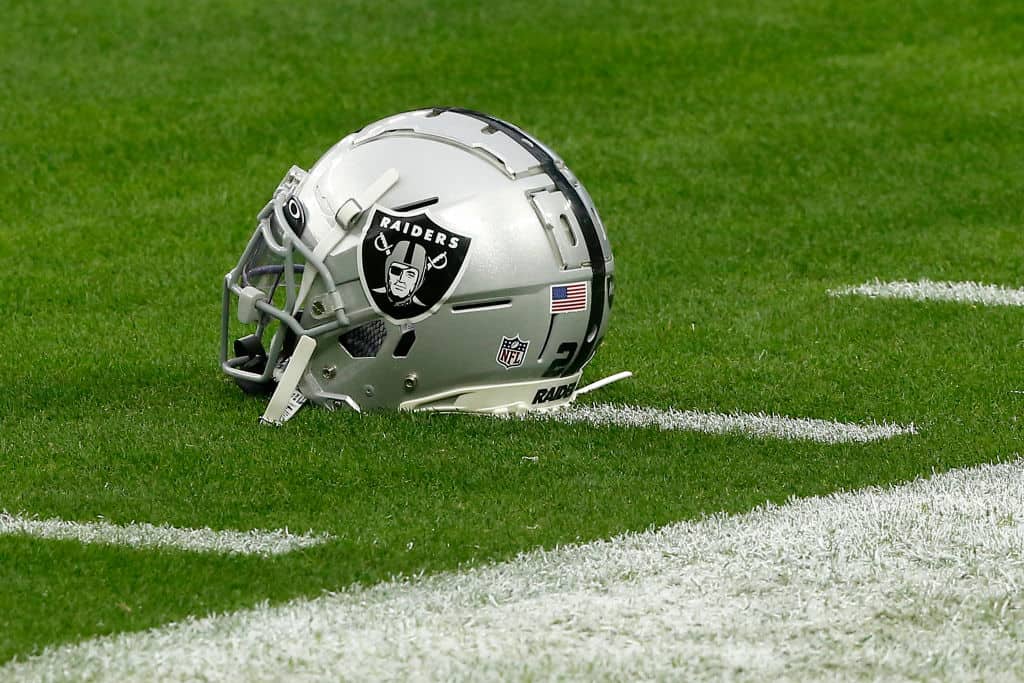 LAS VEGAS, NV - DECEMBER 13: A Las Vegas Raiders helmet sits on the turf prior to a NFL game between the Indianapolis Colts and the Las Vegas Raiders on December 13, 2020 at Allegiant Stadium, in Las Vegas, NV. (Photo by Jeffrey Brown/Icon Sportswire via Getty Images)
What's in this article? Click to show
Raiders Pre-Senior Bowl 7-Round Mock Draft
Raiders 2021 NFL Mock Draft pick-by-pick analysis
Want more 2021 NFL Draft prospect news? Want to do your own mock draft?
Unfortunately for the Las Vegas Raiders, the wind was taken out of their playoff sails as autumn turned to winter in 2020. Their failure to make the playoffs again makes it four consecutive seasons without postseason action. In this Raiders 7-round 2021 NFL Mock Draft, they make the moves that will hopefully help them return to playoff form next season instead of prepping early for the NFL Draft again.
Not too late to get the PFN 2021 NFL Draft Guide!
Want to find out what PFN Chief Draft Analyst Tony Pauline had to say about prospects who were drafted by your favorite team? It’s not too late to download the PFN 2021 NFL Draft Guide. Click here to download for free!

The Raiders’ defense under Jon Gruden continues to be their Achilles heel. It may be too early to describe former first-round selection Clelin Ferrell as a bust, however, he certainly hasn’t provided the pass rush threat that was expected. Despite some flashes from Maxx Crosby, additions like Vic Beasley and Takk McKinley haven’t added much value to the team.

Gruden’s philosophy has been that stopping the run leads to increased pass rush production. However, the Raiders were poor in both facets in 2020. They ranked 24th in rushing yards allowed per game. Troublingly, they allowed the second-most rushing touchdowns per game. They couldn’t stop the run and consequently, they ranked 29th in sacks forced in 2020.

In the first round of this Raiders 7-round 2021 NFL Mock Draft, they attempt to find the solution to their pass rush problem. Kwity Paye is an exciting prospect who combines insane athletic ability with an internal fire to provide a versatile threat on the defensive line.

Speedy and strong, Paye has been productive as a pass rusher. He is equally as impressive against the run. He fits the blueprint of how the Raiders want to achieve success on the defense.

Over the past two seasons, Paye has racked up 16.5 tackles for loss and 8.5 sacks in just 16 games. Despite Michigan struggling this last season, Paye has increased his NFL Draft stock with some dominant displays. The Raiders will hope he can bring that dominance to the AFC West.

As a result of struggling to create any pass rush threat, the Raiders land towards the bottom of most defensive metrics. They allowed the third-most points of any team in the NFL in 2020. They also ranked 26th in passing yards allowed per game, 25th in total yards conceded, and 25th in yards after the catch allowed.

Clearly, they need playmakers across all phases of the defense. Although they drafted Johnathan Abram in the first round of the 2019 NFL Draft, safety figures to be one of their biggest draft needs, especially with Erik Harris and Jeff Heath set to be a free agent.

In this Raiders 7-round 2021 NFL Mock Draft, they address the need with FSU safety Hamsah Nasirildeen. At 6’4″ and 220 pounds, Nasirildeen adds a physically imposing presence in the middle of the Raiders secondary. He plays with a physicality that matches his build, looking to hit hard and separate the ball from his opposition. As a result, he forced three fumbles in an impressive 2019 campaign.

Nasirildeen has the ability to contribute effectively and immediately whether that be as a deep safety, in the box, or in the slot. To get the most success out of him, the Raiders should look at how the Carolina Panthers use Jeremy Chinn rather than how the Arizona Cardinals use Isaiah Simmons early on in their rookie seasons.

Whenever a team allows as many passing yards per game as the Raiders did in 2020, cornerback is always going to be seen as a priority need. Despite taking Damon Arnette in the first round last year, the Raiders shouldn’t rule out striking early again if one of the top cornerbacks is available.

In this Raiders 7-round 2021 NFL Mock Draft, they select Washington cornerback Elijah Molden in the third round.

Despite lacking prototypical size for the position, Molden has been an incredibly productive cornerback for Washington. He overcomes his 5’10” height with excellent football instincts and incredible ball skills. Moreover, Molden led the PAC-12 in passes defended and interceptions in 2019.

Like Nasirildeen, Molden adds value as a tackler, and his four career forced fumbles showcase his ability to create turnovers. Despite his obvious football ability, his size will inevitably cause his draft stock to fall. The Raiders could end up with a bargain with Molden in the third round.

The Raiders added several pieces at linebacker throughout 2020, demonstrating a clear dissatisfaction with the makeup of that unit. Two of those pieces — Raekwon McMillan and Nicholas Morrow — are set to be free agents at the end of the season. Adding a player who provides additional depth with starter potential at the position is something that Gruden and Mayock should give serious consideration to.

Although the LSU defense has been criticized often in 2020, Jabril Cox has been one of their best players. Stepping up to the SEC level after transferring from FCS powerhouse North Dakota State, Cox has not looked out of place. He’s provided a pass rush threat, been disruptive in the run game, and showcased ability in coverage.

As a one-year starter at the FBS level, he obviously has areas of his game to clean up. Most specifically, his lack of long speed may give cause for concern. However, Cox offers an explosive playmaking threat with good value in the fourth round.

When you give up over 125 rushing yards per game and allow the second-most rushing touchdowns in the league, questions have to be asked about the heart of your defensive line. There is a distinct lack of depth, and Johnathan Hankins could also test free agency.

it wouldn’t be a surprise to see Gruden strike for a defensive tackle early on. However, in the fifth-round of this Raiders 7-round 2021 NFL Mock Draft they select USC defensive tackle Marlon Tuipulotu. At 6’3″ and 305 pounds, Tuipulotu won’t be the biggest defensive tackle in the class. However, he is as strong as an ox and uses the strength particularly well against the run.

Although he has been used as a nose tackle in a three-man front for USC, his size would be more suited to the Raiders’ four-man front as a genuine defensive tackle.

Although offensive tackle doesn’t appear to be an obvious need for the Raiders, there are reasons to believe they should be examining possibilities at the position. Both Sam Young and Denzelle Good are pending free agents. Additionally, Trent Brown has been often injured and there is a potential to opt out of his contract this year.

In the sixth round of this Raiders 7-round 2021 NFL Mock Draft, the Raiders select Iowa tackle Alaric Jackson. The former teammate of Tampa Bay Buccaneers rookie Tristan Wirfs excels in run blocking. That would prove advantageous for a Raiders team that wants to run the ball with Josh Jacobs. Jackson is strong and athletic but is far from the finished product in pass protection.

With the final selection of this 7-round 2021 NFL Mock Draft, the Raiders select quarterback Shane Buechele. The quarterback from SMU has been a gunslinger at the college level. As a result, he has featured in the top 10 of passes by yardage in the last two years. He leaves SMU with over 11,000 passing yards and an 87:32 touchdown-to-interception ratio.

Despite his production, a lack of NFL quality arm strength will hamper his stock. Regardless, it would be advisable for the Raiders to evaluate someone of Buechele’s skill set as a potential successor to Derek Carr.

Although Carr’s 2020 campaign saw glimpses of his 2016 form, there is no denying that the Raiders fan base has limited patience with their offensive leader. Another season without success could see Carr leaving Las Vegas.