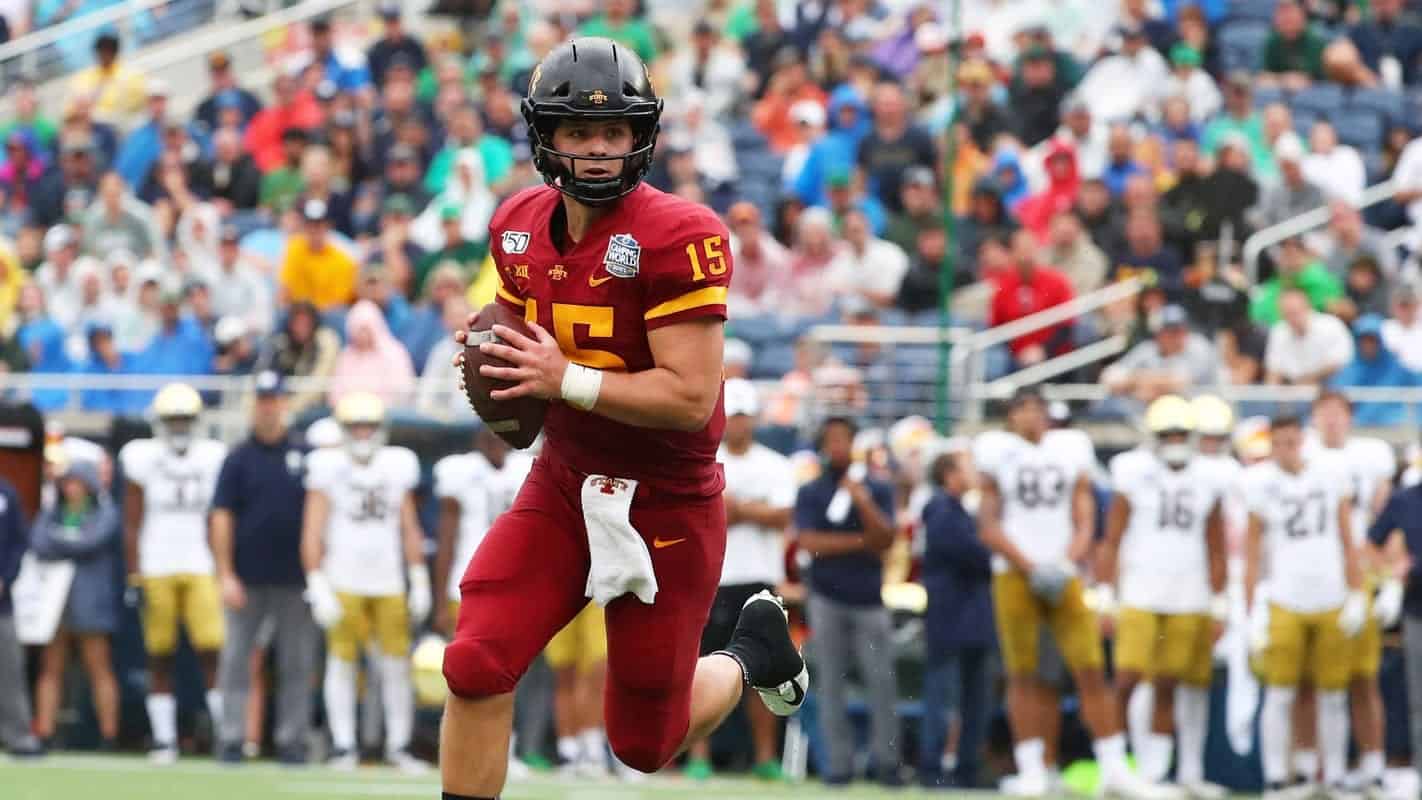 With the 2020 NFL Draft in the rearview mirror, the focus now shifts to an equally tantalizing 2021 class. Four quarterbacks came off the board in the opening round last month, and when assessing the next wave of talent, it’s plausible that 2021 could yield similar results. While Clemson’s Trevor Lawrence and Ohio State’s Justin Fields are essentially locks to be the first two quarterbacks taken, things get interesting when delving beneath the surface to identify the third-best signal-caller of what many deem to be a star-studded class. Let’s take a closer look at Jamie Newman, Trey Lance, and Brock Purdy, three prospects poised to make a convincing case at earning the QB3 distinction in 2021.

Expectations will be justifiably high for the Georgia Bulldogs in 2020 with Newman commanding the offense.

Prior to Newman’s arrival in Athens, Georgia was known for its methodical, yet efficient, offense with Jake Fromm at the helm. Fromm’s physical limitations were often masked by his astute football IQ, and ability to quickly scan the field while delivering the ball with precision, but it was evident the Bulldogs’ offense lacked the explosive components of many of their SEC counterparts.

This season, Newman, a Wake Forest transfer, will have an opportunity to revitalize the offense, giving Georgia the flexibility to run an up-tempo attack to take advantage of their dynamic personnel. At Wake Forest, Newman thrived as a dual-threat signal-caller that placed an emphasis on quick reads, distributing the ball to his bevy of pass-catchers and pulling the ball down to pick up yards with his legs. He finished the 2019 campaign with 2,868 passing yards, 26 touchdowns, and 11 interceptions while adding 574 yards and six touchdowns as a runner.

While there’s no denying Newman’s athleticism, big arm, and pocket presence, players of his skill set have a tendency of exposing themselves to unnecessary hits and struggle to withstand the rigors of a full season. New offensive coordinator Todd Monken will have plenty of offensive firepower at his disposal to propel the program to new heights in 2020, heights that are largely dependent on how quickly Newman can adapt to a new system.

If Newman can maximize his explosive weaponry and elevate his performance in college football’s most competitive conference, expect his draft stock to soar.

If Trey Lance’s 2020 campaign is nearly as compelling as his record-setting 2019 season, it’s feasible to foresee the storied North Dakota State program producing another first-round quarterback.

Lance took the college football world by storm last season, throwing for 2,786 yards, 28 touchdowns, and zero interceptions while adding 1,100 yards and 14 touchdowns on the ground. He led the Bison to the first 16-0 season in college football since 1894 en route to a national championship, earning numerous accolades for his monumental efforts.

The 6-foot-3, 224-pound signal-caller won’t be sneaking up on anyone in 2020, however, as Lance will now be tasked with duplicating the success he experienced as a redshirt freshman.

Lance, who sports a compact build, demonstrates exceptional escapability outside the pocket and toughness as a runner. His immense arm strength is a sight to behold, keeping defenders on their heels at all times, but his poise and ability to seamlessly work through progressions are overlooked aspects of his game. In fact, they are at an advanced stage for such a young prospect.

On the surface, Lance seems like a surefire first-round talent. However, he is still very much a work in progress, as his footwork and overall mechanics need refining before he can be expected to grace an NFL huddle.

While its unrealistic to project another record-setting campaign that culminates in a national championship if Lance manages to piece together another prolific season, don’t be surprised to see the FCS star garner first-round buzz come draft season.

Purdy may not possess the coveted measurables of Newman or Lance, but he does have experience on his side, starting for the Cyclones’ program since his days as a true freshman. Purdy’s steady progression culminated in a standout sophomore season, but the Heisman hopeful has the tools to set the bar even higher in 2020.

While each of these quarterbacks has their own questions to answer this season, one could argue that Purdy is the most pro-ready of the trio. The Arizona native looks most comfortable on the move — his innate ability to extend plays with his legs while keeping his eyes downfield often yielded positive results in 2019 — but his knack for rapidly diagnosing plays and keen decision-making are underrated facets that many young signal-callers struggle with.

The main question Purdy must answer in 2020 is his ability to get outside of his comfort zone and push the ball down the field. As outlined by Pro Football Network draft writer Chris Spooner, the Cyclones’ cupboard is bare in terms of weaponry, and the offensive line situation is less than ideal. If Purdy expects to be viewed as a top-three quarterback in the 2021 NFL Draft, he must elevate his surrounding cast and demonstrate adequate arm strength and accuracy.