With numerous college football conferences recently announcing that they will not be having a season in 2020, many are led to believe that the 2021 NFL Combine will be one of the most important in draft history. A place for players to show off their physical gifts and demonstrate how they compare to the rest of the players at their position. So who do I believe some 2021 NFL Combine standouts can be, and why must they have a strong showing for their draft stock?

One of Michigan’s top prospects in the 2021 NFL Draft, Paye appeared first overall on Bruce Feldman’s 2020 Freaks List. He’s expected to be dominant in the three-cone drill while posting strong numbers in the 40, vertical jump, and bench press. This all while measuring in at 6’4 271 pounds. Now that the Big Ten has canceled its season, Paye will need a huge combine to cement himself as a legitimate top-50 prospect.

Lance is one of the top three quarterback prospects in the 2021 NFL Draft, but rumors are currently swirling that, with the cancellation or delay of the FCS season, that Lance will likely sit the season and prepare for the NFL Draft. Coming from the FCS, Lance already has some ground to make up with his draft stock. However, being the excellent athlete he is, with a dominant combine, Lance could set himself up to be an early first-round selection in the 2021 NFL Draft.

Farley was the first major player to opt-out of the 2020 college football season, announcing that he would be declaring for the draft. Farley has an excellent frame for a cornerback listed at 6’2 207 pounds, and he’s an elite athlete. The expectation is that he’ll test as one of the fastest players an Indianapolis. With his already impressive size, a great combine from Farley could make himself the consensus top cornerback.

One of the most entertaining film studies I had this summer, Washington was a spark-plug for the Horned Frogs defense. He’s undersized, so his size will be a point of interest, but he’s also impressively strong for his size, and I’m interested to see how his jumping numbers come in. If Washington can measure above 5’8 and 185 pounds and dominate testing, teams will be less inclined to put much stock in his stature.

Two of the fastest players in all of college football, expect both of these players to be the favorites to run the fastest 40-yard dash. The two players are under-sized and under-developed, and it seems likely that neither will get another year to produce film. Both these players need a big combine to ensure they don’t slip due to size concerns or other issues.

A player that I was really excited about this season, Oweh was finally ready to move to a full time starting spot on Penn State’s defensive line. Oweh will likely be one of the best testers among all position groups in the 2021 Combine, but there’s a belief that he’ll be even better.

Rumors have swirled of Oweh’s athletic ability, and some believe that he could leave Indianapolis as the best testing defensive lineman in combine history. Oweh lost his chance to produce tape this season. If he declares for the draft, he’ll need a huge combine to warrant a second day or better selection.

The definition of “a mountain of a man,” Brown towers over the competition at 6’9 and 325 pounds. His work ethic and strength are well documented around the scouting community, and the combine will give him an opportunity to show off his freakish physical gifts. How athletic he is will be the biggest question, as I’m not yet sure if he’s just an average athlete or if he’s a plus in that category. It’s hard to gauge when he’s competing against obviously inferior competition. 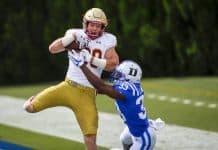 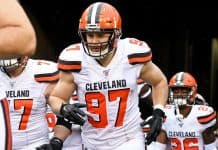