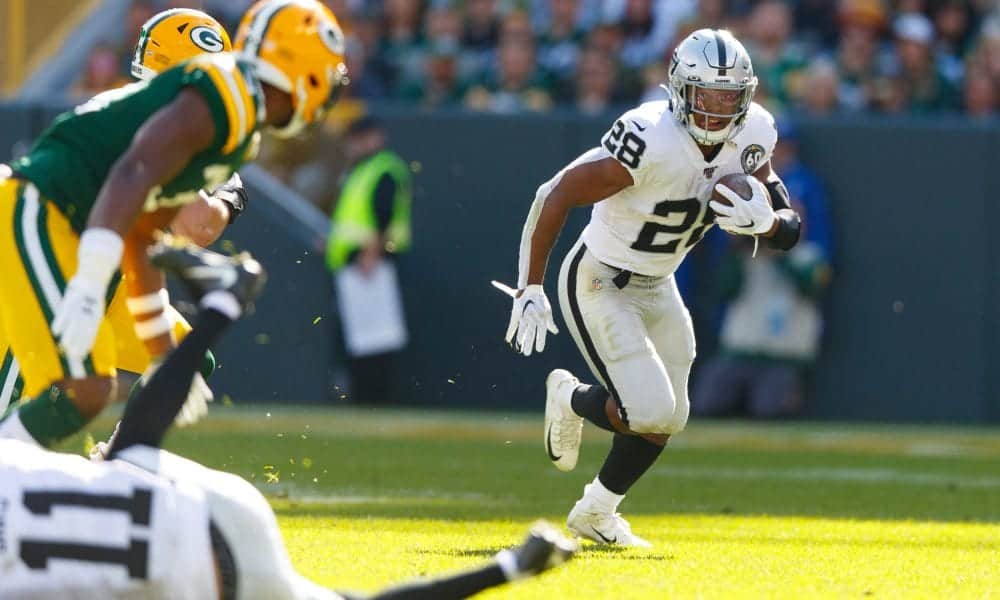 Offensive Share Metric (OSM) is the measure of how a player performed based on the elements of the game that were solely under their control. Here are the biggest rookie and second-year player OSM storylines heading into week 8.

Rookie contributions for the Oakland Raiders

The Oakland Raiders came up short of a fourth straight win in Green Bay last Sunday, but the news wasn’t all bad. Rookie running back, Josh Jacobs continued to carry the Oakland running game with remarkable aggressiveness and efficiency. His 17.54 OSM grade was the fifth-highest among all running backs for the week and it was largely driven by his quickness to the line of scrimmage.

Jacobs’ 3.15 efficiency (EFF) mark was tied for second on the week. Correspondingly, he spent very little time behind the line of scrimmage (TLOS), averaging 2.7 seconds per carry and good for sixth. The result was a 24-carry, 124-yard performance on the ground. Jacobs current sits ninth among all running backs in OSM in the NFL.

While Jacobs’ performance is something we have come to expect, Keelan Doss was a new entry on the OSM charts. The on-again-off-again undrafted rookie qualified for the first time with a five-target, three reception, 54-yard day leading Oakland wideouts in all three categories.

His performance resulted in the 20th highest wide receiver OSM (35.15) of the week. The 3.5 average yards of separation (SEP) he was able to create was 11th best by a wideout in week 7. This allowed Doss to get open relatively deep downfield, producing a 15.1 Targeted Air Yards mark (TAY).

The rookie pair will have their work cut out for them this Sunday as the Raiders travel to meet the Houston Texans. Jacobs, in particular, faces a tough challenge as the Texans currently feature the fifth-best run defense per Football Outsiders’ DVOA metric.

Doss will be out to prove that his breakout was a genuine change in target hierarchy and not simply the result of scheme and script circumstances. While Doss did well to create separation against the Packers, he was given a relatively generous 6.6-yard average cushion (CUSH).

However, he may not be afforded the same breathing room against the Texans who played T.Y. Hilton much tighter (3.7 CUSH) this past week. The Hard Knocks star will have to earn his space on Sunday if he is to build on his Week 7 performance.

OSM identifies a serious need at WR in San Francisco

The Carolina Panthers (4-2) and San Francisco 49ers (6-0) face off in this week’s premier NFC matchup. These two contenders have similar formulas for success. They both have outstanding defenses, strong running games, and feature their running backs and tight ends heavily in the passing game. The one perceived weakness is their WR groups.

So far, the Panthers are standing firm on their wideouts, feeling the answer is already on the roster while the 49ers acquired veteran Emmanuel Sanders to provide a boost to their passing game. The OSM grades (or lack thereof) for both groups appear to tell us why.

Thus far, Deebo Samuel leads all 49ers receivers in targets thus far at 22 (15 rec., 168 yards, 1 TD) followed by Dante Pettis at 17 (9 rec., 83 yards, 1 TD). This has resulted in almost identically poor DVOA ratings of -27.9% and -27.8%, respectively. Their inefficient production is almost certainly the culprit for their lack of targets.

In order to qualify for OSM, receivers need a minimum of five targets in a single game. Both Samuel and Pettis have failed to qualify in four of their six games thus far. Those four qualifying games mark the fewest from wide receivers among all teams in the NFL. For context, Sanders qualified five times in six games while in Denver this season. He posted an overall OSM grade of 35.52 (33rd).

Maybe coincidentally, the Patriots only have six qualifying OSM games from wideouts still on their roster, which would be good for the second-fewest. They, too, traded for a veteran WR this week. A lack of qualifying OSM games appears telling not only individually, but from a team perspective as well.

49ers quarterback Jimmy Garoppolo currently sports the fifth-lowest In Air Yards (IAY) average at 6.6 per attempt. His 13.8% Aggressiveness (AGG%) rating is also among the most conservative in the NFL at 8th overall.

However, despite poor overall production from his wide receivers, Garoppolo is still completing 68.3% of his passes, which is +1 over his Expected Completion Percentage (xCOMP%). Translation: It’s not him. It’s them.

49ers brass and OSM seem to be in agreement that the primary WR they were looking for was not already on the roster. It will be worth keeping an eye on how Sanders performs under these same conditions over the next few weeks and in particular, this week against Carolina’s third-ranked passing defense per DVOA. My expectation is Sanders will excel.

Where San Francisco’s young, day two wideouts have yet to earn the trust of their quarterback and coaching staff, the same cannot be said of the pair in Carolina.

D.J. Moore and Curtis Samuel have both qualified for OSM five times in six games. So far, Moore has seen 49 targets resulting in 33 catches, 425 yards, and one touchdown. Samuel is not far behind with 43 targets, 23 catches, 297 yards, and two touchdowns. Moore’s 33.09 overall OSM grade falls firmly within the very good range while Samuel comes in the upper range of good with a 28.17 grade.

With a 14.8 (11th) TAY, Samuel has established himself as a legitimate deep threat. His 38.39% share of Carolina’s Targeted Air Yards (TAY%) is seventh highest in the NFL. He is coming off of a 4 catch, 70-yard, one-touchdown performance. His highest yardage output since week 2.

In fact, Carolina had three pass-catchers (Moore, Samuel, Greg Olsen) both qualify for OSM and grade above 30 for the first time in a single game against the Tampa Bay Buccaneers in London. Now, they face a 49ers defense that ranks second in pass defense DVOA. While the Panthers passing game seems to be coming together more each week, this looks like it could be another 30+ touch day for Christian McCaffrey.

San Francisco was compelled to acquire veteran help on the outside due to a lack of development from their recent day two draft selections. Carolina, however, appears to have hit on theirs. OSM shows why the Panthers continue to trust their guys while the 49ers could no longer wait for theirs to catch on.