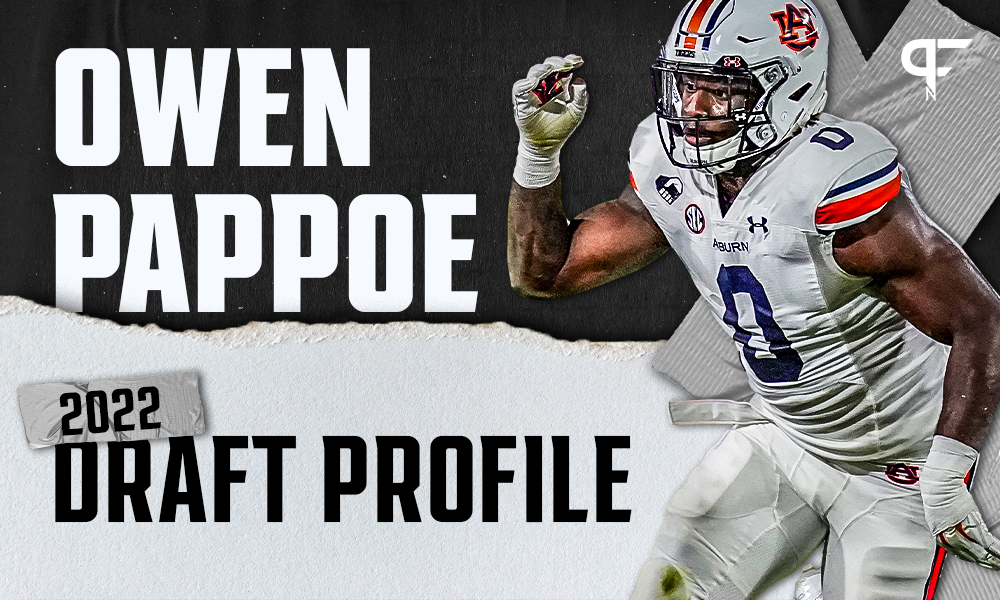 The 2022 NFL Draft‘s linebacker class is a complete unknown. Unsettled, uncertain, and wide open for an NFL Draft prospect like Owen Pappoe to rise up and take advantage. Pappoe’s scouting report is an exciting one; the Auburn LB has most of the traits necessary to be a riser. But what does he need to do to complete the puzzle? That’s what we’re here to figure out.

The 2021 NFL Draft’s linebacker class, at the very least, was lauded for its depth. Early on, the 2022 NFL Draft doesn’t look nearly as plentiful at the linebacker position. That said, there are a few names near the top who could ultimately take a leap and surprise. Auburn LB Owen Pappoe is one of those names.

Pappoe has the pedigree of a top recruit, but his profile matches up with the hype. He’s long been one of the most talented defenders on the football circuit, and he’s steadily progressed over his first two seasons with the Auburn Tigers. Now, in his first year of eligibility, Pappoe’s NFL Draft scouting report demands plenty of attention. Where does he thrive, and how does his skill set translate to the next level?

Right away, Pappoe’s athletic upside jumps off the screen. It’s no surprise, of course, that Pappoe is a top-flight athletic talent. He was the most athletic player in his recruiting class, with a 4.47 40-yard dash, a 40-inch vertical jump, and a class-high 147.12 SPARQ rating (insert eyeball emoji). Pappoe has the goods, but how do his athletic traits translate to the football field?

Pappoe’s speed and explosiveness show up quickly when watching the Auburn LB. He has exceptional explosiveness when playing at full speed with impressive natural twitch and lateral burst. This lateral athleticism allows him to clog lanes when engaged with blockers and contributes to great closing burst as a tackler. He can adjust his tackling angles at a moment’s notice, and he knows how to use his length to wrap up.

With his raw talent and ability, Pappoe can make challenging direction changes, but his speed also matches up as well. He flashes sideline-to-sideline range, and he’s an incredibly easy mover when shifting directions laterally. His low-hipped frame and shorter legs allow him to move quicker and with more spryness. He possesses the athleticism to easily stick to tight ends, hanging with many running backs and receivers.

Beyond his raw athleticism, Pappoe also possesses excellent proportional length for his size. He’s only 6’1″, but his arms are long enough to increase his disruption window. Pappoe can use his length as a conduit for his explosiveness, both in run defense and pass defense. This only compounds his upside.

Execution beyond the athletic traits

Pappoe’s physical foundation sets the stage for much of his production. However, Pappoe also has appealing traits that extend beyond his athletic profile.

In run defense, he fares surprisingly well given his size deficiency, which we’ll get into in a moment. Pappoe keeps his hands active when engaging blockers and constantly combats opposing anchors. He can reach quickly with his length and has the ability to extend and disengage — or stack and shed — against stronger linemen and tight ends. Additionally, the Auburn LB has good gap discipline, and he’s willing to stand in and absorb contact when he’s in proper position.

Once disengaged, Pappoe’s athleticism comes back into play. He has stellar footwork and a strong base when approaching blockers. Furthermore, he has a working understanding of blocking angles and how to maintain tackling leverage. His lateral athleticism plays a large part in him being able to manipulate angles in tight spaces. Once clear, his explosiveness allows him to close in on the ball carrier.

In pass defense, Pappoe is similarly solid. He’s fairly measured and assignment-sound, and he does a good job recognizing and running with routes in the flats. The Auburn LB can make quarterbacks uncomfortable by swiftly taking away checkdown options.

On the surface, there isn’t much stopping Pappoe from being one of the best NFL Draft prospects at his position. He’s athletic, reasonably long, and owns several appealing intangible traits. Even so, there are some negatives to take into account, most notably his size and frame density.

Pappoe’s size isn’t necessarily a weakness, but he isn’t incredibly dense, and his lower body can get stronger. He’s a nimble player with good toughness, but his size limits him in a few areas. As proficient as he is in run defense, the Auburn LB can struggle to get off blocks occasionally, and he doesn’t have the raw strength to make tackles amidst displacement. Additionally, Pappoe isn’t much of a threat on the blitz unless he has an open lane, and tight ends pose a size mismatch against him.

Pappoe can reasonably get a bit bigger and improve his efficiency of motion. He’s an exceptional athlete, but he can better channel his traits moving forward. His play speed doesn’t always match his athletic ability. His change of direction isn’t always smooth, wasting motion in space, which can slow him down. He also doesn’t fully turn his hips when tracking sideways. Whether due to indecision or tentativeness, this habit can detract from his range in certain situations.

Among other things, Pappoe, like most linebackers, is prone to deception by options and play-action fakes. Moreover, his willingness to engage blockers occasionally leaves lanes open for runners.

Pappoe is an outstanding player with a promising NFL Draft projection. The Auburn LB has the athleticism to fulfill a multitude of roles, and he’s also not a size liability. He certainly needs to tack on a few pounds, but his impressive proportional length allows him to attain leverage even in mismatch situations.

The best thing Pappoe can do in 2021 is show he can maintain his athleticism at 230 or 235 pounds. However, as it stands, he’s a well-rounded player. He’s better than expected as a run defender for his size and has ample utility in coverage. He can become a more productive playmaker against the pass, but his ability to negate underneath routes and maintain his spacing is impressive for his experience level.

As of now, Pappoe isn’t a first-round prospect. He doesn’t quite have the size to complement his elite natural athleticism. Nevertheless, he’s an intelligent defender with the talent to thrive. If he can increase his efficiency of motion and fill out his frame a bit more, he can easily challenge for a spot early in the 2022 NFL Draft.

With a 4.47 40-yard dash and a 40-inch vertical, it comes as no surprise that Pappoe was one of the most coveted recruits in the entire 2019 recruiting class. It wasn’t just tantalizing upside, either. Pappoe put his traits to work in his final high school season, amassing 112 tackles, 14 tackles for loss, 4 sacks, 7 pass deflections, 2 fumble recoveries, and 2 blocked kicks.

With his combined athleticism and production, Pappoe earned a place as the top-rated linebacker in his class. Ranked eighth overall on ESPN’s recruiting board, Pappoe was a five-star recruit with offers from dozens of programs, including Ohio State, Alabama, Clemson, and LSU. Georgia was also an option for Pappoe, who hailed from Grayson High School in Loganville, Georgia.

Yet, at the end of his cycle, Auburn was the team that stood out to Pappoe the most. He was comfortable at Auburn, but most importantly, Pappoe knew he’d get an early opportunity there. For a talented prospect with NFL Draft aspirations, that held weight above everything else.

As he predicted, Pappoe received an opportunity early for the Auburn Tigers. In fact, he started every game at linebacker as a true freshman against SEC competition (and played well doing so). In his first season, Pappoe generated 49 total tackles, 3 tackles for loss, 2 sacks, 2 pass deflections, and a forced fumble in 13 contests.

Pappoe’s freshman campaign was a success, but it gave way to an even more productive 2020. Pappoe nearly doubled his tackling output in two fewer games. In total, he accumulated 93 tackles, 6 tackles for loss, 4 sacks, an interception, 2 pass deflections, and a fumble recovery.

For Pappoe, playing in the NFL seems like a matter of destiny. Once a top-rated recruit and now one of the top defensive playmakers in the SEC, the Auburn LB has the talent and the positive progression. 2021 will be his chance to take the next step and fulfill the potential that has been evident since well before his college career.