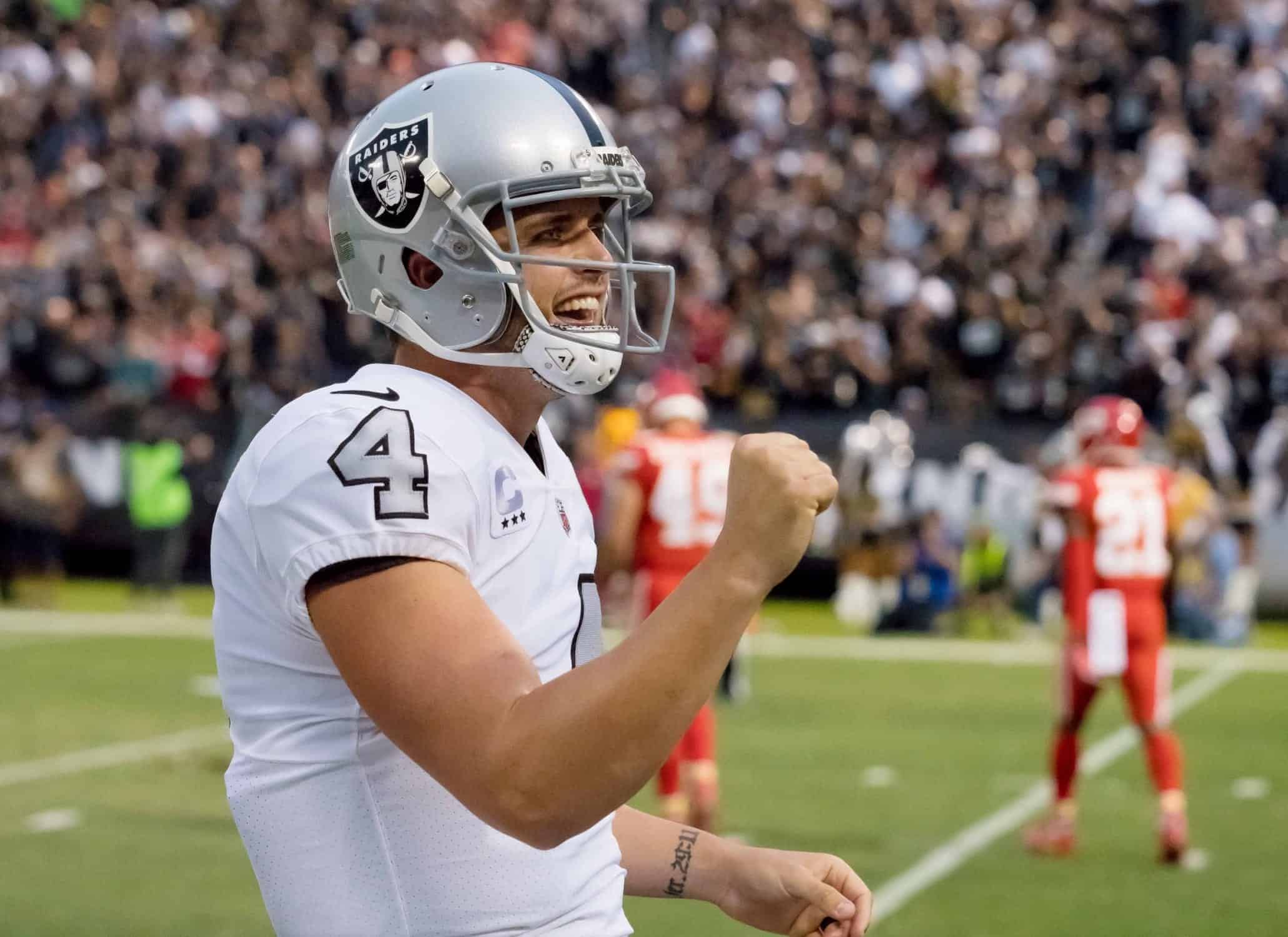 It’s been a frustrating few months for Oakland Raiders quarterback Derek Carr. After a mediocre 2018 NFL season, Oakland has been the scene of a significant overhaul. Carr was far from immune from the fallout of last season, and he hasn’t escaped the rumor as the Raiders look to move on from previous failures. Despite signing a then-record $125 million contract back in June 2017, Carr’s future under center seemed uncertain going into the 2019 NFL Draft.

The uncertainty began months ago with the sideline outburst between Jon Gruden and Carr during the Arizona Cardinals game. Both parties downplayed the public display of frustration. However, rumors of tension wouldn’t go away. The uncertainty was further fueled by the Raiders working out some of the top quarterbacks in the draft. Kyler Murray and Drew Lock were viewed as potential targets for Mike Mayock and Gruden, as they looked to revive the fortunes of the franchise. Lock, in particular, was seen as a possible fit, having worked with Gruden at the 2019 Reece’s Senior Bowl. The Raiders head coach was effusive in his praise for the former Missouri quarterback.

We know now that the Raiders had no intention of replacing Carr this spring.

If anything, Carr is in a stronger position than before. The Raiders’ quarterback room consists of perennial back up Mike Glennon and former Bills quarterback Nathan Peterman. Rather than provide Carr with competition, Oakland has shown faith in him. He’s the man to lead this Raiders revival as they prepare to leave Oakland in a blaze of glory rather than a whimper of disappointment. Now is the time to prove he’s worth every single one of the $125 million the Raiders were happy to part with just two years ago.

At that time, Carr became the highest paid player in the league. It was a deal that was the culmination of three years of hard work on Carr’s behalf.

As a 2014 second round draft pick, the rookie out of Fresno State fought his way past Matt Shaub and into the starting quarterback job with an impressive pre-season. That 2014 season saw Carr break the Raiders’ rookie touchdown record. He also became the first Raiders’ quarterback since Rich Gannon in 2002 to start all 16 games.

His star was ascending. In 2015, Carr helped the Raiders to a 7-9 record on his way to the 2016 Pro Bowl. It was the first time Oakland had sent a quarterback to the game since 2002. With 32 touchdowns and 3987 passing yards (per ESPN), Carr was beginning to show the football world what he could do.

The pinnacle of his career came the following season.

Carr led the Raiders to a 12-4 record while putting together an MVP caliber campaign. Oakland was primed for a Super Bowl run, but then disaster struck. Late in the game versus the Indianapolis Colts, Carr was sacked by Trent Cole and suffered a freak broken fibula. It was season over for Carr, and essentially the Raiders.

That 2016 season sits as the highlight of Carr’s career to date. His time in Oakland has tracked in a perfect arc. The win column over his five seasons reads 3, 7, 12, 6, 4. An almost perfect arc. However, that 2016 season holds the blueprint for how Carr can lead the Raiders to victory again in 2019.

It starts, rather obviously, with protection.

In 2016, Carr absorbed just 18 sacks. It’s the lowest figure of his career. If you can protect him, Carr will produce. The Raiders failed miserably to keep their prized asset on his feet in 2018. The result was a disheartening 52 sacks. It was hardly surprising with a tandem of rookie tackles. Injuries on the interior of the offensive line created even more problems. Center Rodney Hudson was the only player to play every snap of the year.

2019 should see more stability and a cleaner pocket for Carr. With a year of experience under his belt, Kolton Miller will look to prove he was worth a first-round draft pick at left tackle. Trent Brown converted a Super Bowl win with the Patriots into a massive contract with the Raiders. He will hold down the right side and is a significant upgrade on Brandon Parker. If Gabe Jackson can stay healthy, the Raiders will have a solid interior as well.

Undrafted free agent fullback Alec Ingold is known for his blocking prowess, and he adds an extra element of protection for Carr in 2019.

The running game is going to be crucial for Carr to succeed this coming season.

In 2016, the Raiders had the 6th best rushing attack in the NFL. In every other season that Carr has been the quarterback, they have been no higher than 25th in the rankings. Cultivating a strong running game allows the team to be more creative in its play calling. As a result, the quarterback gets more time to make a play and therefore a greater chance of success. The 2016 Raiders had a three-headed backfield monster, with Latavius Murray as the primary weapon. Jalen Richard and DeAndre Washington ably assisted him. The trio kept teams guessing, and all contributed to the 1922 rushing yards achieved that year.

Gruden will look to provide a similar threat in 2019. Unfortunately, the Raiders suffered a set back when Isaiah Crowell tore his ACL during a team workout. That forced Oakland to re-sign the recently released Doug Martin. Despite Martin’s experience and the undeniable talent he’s displayed through the years, I expect rookie Josh Jacobs to be the spearhead of the ground attack. He’ll have the experience of Martin, Richard, and Washington alongside him. Gruden has always favored a strong ground game, and if he can provide it this year, he’ll also get a strong air game.

The Raiders have bolstered that air game for 2019 too.

Carr was at his best in 2016 when he had a reliable, playmaking, target at wide receiver. In Amari Cooper and Michael Crabtree, he had two, and they combined for over 2000 receiving yards. With the combination of their play and the success of the running game, the Raiders featured in the top 10 of the offensive rankings for the only time in Carr’s career. With Cooper’s trade to the Dallas Cowboys last season, Carr lost the best weapon he had, and the results on the field showed.

Gruden has spoken in recent press conferences about wanting to stretch the field vertically in 2019. The Raiders went out and secured Antonio Brown in a trade with the Pittsburgh Steelers to give Carr potentially the best receiver that he has ever had. They also acquired Tyrell Williams as an additional deep threat. Carr now has two deep threat receivers similar to 2016. If by some small miracle the opposing defense manages to cover both, then the Raiders drafted Hunter Renfrow to provide a dangerous presence underneath. When you add another rookie, tight end, Foster Moreau, into the mix, Oakland has a potentially explosive and varied offense for 2019.

Carr needs just 340 passing yards to overtake Ken Stabler as the Raiders all-time passing yards leader. Stabler was the first quarterback to win a Super Bowl for Oakland. Can Carr be the next?

Now is the time to deliver.