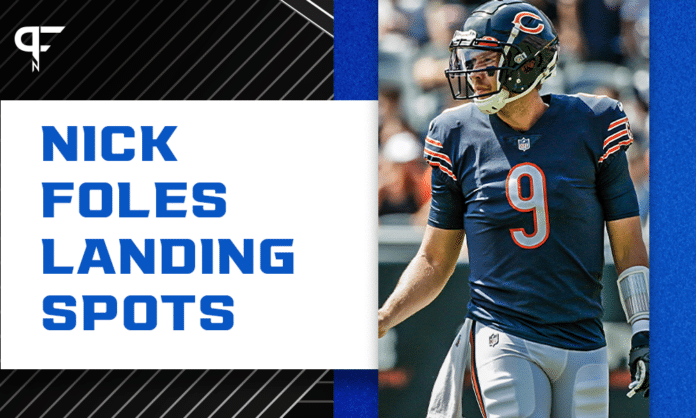 Nick Foles Landing Spots: 5 teams that could use the former Super Bowl MVP

Nick Foles is currently the QB3 in Chicago and a possible trade target -- what landing spots make sense before the 2021 season begins?

Quarterback Nick Foles is probably not the long-term option for the Chicago Bears. He’s third on Chicago’s depth chart despite being the team’s seventh-highest-paid player. The problem is, the Bears are up against the salary cap, and releasing him outright — even with a post-June 1 designation — would cost them millions more in dead money than what he’s already scheduled to count. What are Foles’ potential landing spots?

Will the Bears trade the veteran quarterback?

A trade is surely Chicago’s preferred end game. His $4 million base salary, and the cap charges that come with it, would be someone else’s obligation.

Fortunately for the Bears, several teams need a quarterback, and it wouldn’t be surprising if they’re able to work something out. Here’s a look at five destinations that make sense.

Which NFL teams should consider trading for the former Super Bowl MVP?

Dak Prescott will start Week 1. But will he start all 17 games in 2021? The Cowboys need a contingency plan.

As of Monday morning, that plan was one of three uninspiring names: Garrett Gilbert, Cooper Rush, or Ben DiNucci (who has been particularly brutal this preseason).

The Cowboys have gone all in to make a deep playoff run this year. When you’ve committed the kind of resources and energy they have, it wouldn’t be hard to envision paying a little bit more for an established backup.

The Colts are another team with Super Bowl aspirations and a mending quarterback. There are encouraging signs that Carson Wentz will miss few if any games after unexpected foot surgery.

Still, even if he is good to go Week 1, there’s no way the Colts can expect a guy who has played 16 games just once in the past four seasons to play 17 this year.

Plus, rookie QB Sam Ehlinger is out for up to six weeks with a sprained knee, leaving Jacob Eason as the team’s only viable backup.

Wentz and Foles won a championship together in 2018. Perhaps Frank Reich tries to recreate that magic three years later.

The stats are a resounding YES!

Since entering the league in 2016, Allen has appeared in just eight games and put up some ugly numbers: 57.1% completion rate, 6.4 yards per attempt, a QBR in the 40s, and six losses in eight starts.

The Bengals are probably another year away from competing seriously. But if Burrow gets hurt, a developmental year could become a disastrous one for Zac Taylor, who may already be on the hot seat.

Unless the Falcons see something in Josh Rosen that three other teams have not, Atlanta has a real issue at quarterback.

AJ McCarron was the front-runner to be Matt Ryan’s backup, but he’s out for the year with a torn ACL.

Feleipe Franks and Rosen, the former No. 10 overall pick, aren’t compelling Plan Bs. The Falcons will likely add another QB to that room in the coming days.

Could Foles, who had a disastrous 2019 campaign with the Jaguars, possibly make a return to Duval? It seems unlikely, considering the Jaguars have already paid him $30.5 million for four starts — all losses.

Yet, after trading Gardner Minshew to the Eagles, the Jaguars have a big question behind Trevor Lawrence. And that question’s name is C.J. Beathard.