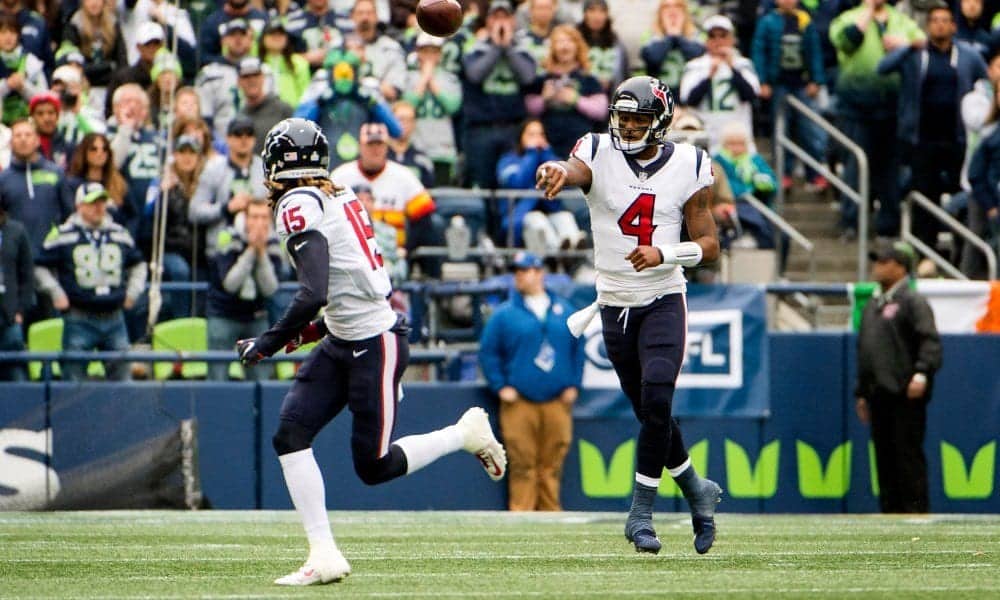 Wild Card weekend in 2020 kicks off with an intriguing AFC clash as the Houston Texans host the Buffalo Bills in NRG Stadium. The Bills were one of the surprise packages of the season, getting to 10 wins for the first time since 1999. Now the Bills will look to snap another streak, as they aim to win their first playoff game since 1995. As for the Texans, they will be hoping to banish the memory of last season’s embarrassing first-round defeat to their AFC South rivals, the Indianapolis Colts. Let’s take a look at how we see this Bills vs. Texans matchup going into this weekend.

This game opened at Texans -2.5 and has not budged all week in most places. The betting action on the spread has been pretty much even, but the big money has favored the Bills thus far. The total shifted half a point to 44, with the majority of money coming in on the over. However, it then moved back to 43.5 in the past 24 hours. It will be interesting to see if we see any further movement before kickoff.

Want more betting analysis? Click for the latest from the PFN Betting Crew.

I do not know what to make of this game. Talent-wise I believe the Texans are better, but I can see a scenario where the Bills control this game on the ground. I can also see a situation where one of these two offenses slows down the pace if the game is lopsided before the fourth quarter starts. All of these options make it hard to make a play on the total or the spread.

Instead, I am going to turn my attention to prop bets. Devin Singletary has taken over the Bills backfield in recent weeks, and I expect him to see the bulk of the carries again in this one. Before the New England game, he had rushed for 63 or more yards in all of his previous five games. With his line set at 63.5, I think there is value against one of the worst-ranked run defenses in the league.

Josh Allen to find the end zone at around +180 is also tempting, but it is just a lean for me this week.

This weekend, we will get our first of four NFL playoff wildcard games. The first game pits the surprising Buffalo Bills against the Houston Texans, where the Texans are 2.5 point home favorites. In a game that will likely have the least action of the weekend, I see the most significant edge available. Being able to grab a home favorite in the playoffs under a field goal is too good to pass up. I expected this line to climb to 3.5, but it looks like the public is all over the Bills.

Buffalo is preparing to make just their second playoff appearance since the 1999 season. Meanwhile, the Texans have been to the playoffs four times in Bill O’Brien’s six years on the job — they’ve only won one game in January during that span. They were wiped out last year by the Colts at home in their playoff opener, losing by two touchdowns.

A key for me here is the health of the Texans. They will likely have J.J Watt back and have already confirmed the availability of Will Fuller. In his most recent press conference, O’Brien said, “For this time of year, probably as good as you can be…. we’re in decent shape.” The team is coming together at just the right time.

Another indicator that the Texans are a legitimate threat in the AFC was their schedule. The Texans played 11 opponents that finished at .500 or better this year. They won eight of those games, notching more wins against quality foes than ANY of the dozen playoff teams, facing by far the toughest strength of schedule of any AFC team. The Bills three best wins this year came against the Cowboys, the Steelers and the Titans before Tennessee benched Marcus Mariota — not exactly a who’s who of quality squads.

Even though the Bills have the second-best defense in the NFL, allowing only 16.2 PPG, they have struggled against the run. Texans running back Carlos Hyde has quietly put together a 1,100 yard rushing season. Offensively, Houston outmatches Buffalo in nearly all aspects. Just compare the rosters. The Buffalo fan base and the public are excited about their chances in this game, but the truth is that Watson, Hopkins, and Hyde easily trump Allen, Singletary, and Brown.

The NFL Playoffs kick off with a battle of two AFC teams that have had a mixed bag of ups and downs this season. The Buffalo Bills take their mafia on the road and head to Houston, where the Texans will hope to do better at home than they did this time last season.

While both teams have solid offensive weapons, they also struggle with consistency, and for that reason, I am not expecting that much scoring. Combine that with two solid defenses, with Buffalo’s being rather imposing, and we are looking at a low scoring smash-mouth type of game.

While the Bills are building a solid team, the Texans home-field advantage, combined with the best player on the field, DeAndre Hopkins, should be enough to move on to the next round.

The Houston Texans are laying 2.5 points at home in a spot where they laid an egg just last year during Wild Card Weekend. The Buffalo Bills will enter NRG Stadium on Saturday afternoon with the edge in both head coaching and overall defense. So why am I on the Texans in this spot? It mostly comes down to the quarterbacks. I’m taking Deshaun Watson over Josh Allen every day of the week and twice on Wild Card Weekend. Beyond the obvious eye test, Allen is also a first-time postseason starter who happens to be a road underdog. Quarterbacks in similar spots this century are just 3-11 straight up and 4-10 against the spread.

The Bills offense will also have to deal with the return of JJ Watt, who makes this Houston defense an entirely different unit than the one giving up nearly 50% of third-down conversions and allowing touchdowns on 71% of red-zone trips this season. I also expect Watt’s return to have an impact on the Houston crowd, perhaps providing the Texans with more of a home-field advantage then they’ve enjoyed at any point this year.

If Will Fuller V suits up and manages to play into the second half without re-injuring himself, this could be a massive advantage for the Texans. On the other side of the ball, Buffalo could potentially be without starter cornerback Levi Wallace, which would leave too many weapons to cover downfield for Tre’Davius White. I like the home team here by about a field goal.