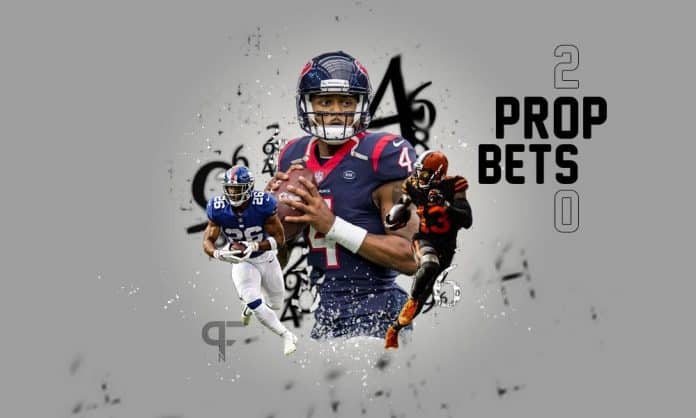 As we head into Week 3 of the 2020 NFL season, here are our NFL betting team's favorite prop bets from across the slate of games.

After two incredibly eventful weeks in the 2020 NFL season, Week 3 sets up to be another barn-burner of a week, which can only make for an intriguing situation in the prop bet market. Each week, our NFL betting team will be providing you with our favorite prop bets of the week to help win you some cash. This article will take you from Thursday Night Football through to Monday Night Football, as we continuously update our selections as more lines become available.

Week 3 starts Thursday night with another intrastate offering as the Miami Dolphins take on the Jacksonville Jaguars, before ending with the potential highlight game of the season between the Kansas City Chiefs and Baltimore Ravens on Monday Night Football. Let’s dive into some of our favorite prop bets for Week 2!

The Browns righted their ship against the Bengals and, most importantly, got the offense on track. Then there’s this stat: Without the short field provided by Carson Wentz’s awful interception near the end of the first half in the opener, Washington would have a grand total of zero points in the first half this season. Last week Washington surrendered 244 yards in the first half at Arizona. And the Browns boast as many weapons as the Cardinals do.

This play just seems to fall into place with the opponent and the player matching up perfectly. Last week the Browns dreadful linebacker group allowed 11 receptions, 87 yards, and a touchdown on 15 tight end targets. Thomas leads the Washington Football Team in red-zone targets with three, commanding 33.3% of the team red-zone targets.

The juice on this seems off to me given that Ertz has averaged seven targets per game over the last two weeks. Sure he has only pulled in eight of those targets, but his career catch rate is better than the current 57.1%. Throw in another four vacated targets per game with the loss of Jalen Reagor and we could see Ertz looking at eight targets, which should be enough to pull in five receptions at nice odds.

These odds seem off to me given that Anderson is averaging 7.5 catches per game on nine targets per game so far this season. With Christian McCaffrey missing the run game will be largely non-existent so look for Teddy Bridgewater to have to throw plenty. This Chargers defense is very good, but with Melvin Ingram on the IR, they will lose a little of their pass rush ferocity. Look for the Bridgewater to Anderson connection to keep rolling this week.

Through two weeks Carson has nine receptions on nine targets for 81 yards and three touchdowns. In a game that should be a shootout, look for Carson to play a big role in the passing game against a Cowboys team that has allowed over 20 receiving yards to backs in both of their games so far this season.

The Dolphins are coming off a game in which they lost Byron Jones on the way to being taken for over 400 passing yards by Josh Allen and the Buffalo Bills. This week they face a QB in Minshew who went over the 330-yard mark last week in a game that has the potential to be another shootout this week

Through the first two games of the 2020 season, Gaskin has been used reasonably heavily by the Dolphins in the passing game. In total, Gaskin has seen 11 targets for 10 reception and 62 yards. In both games, he has gone over the 16.5 receiving yard mark with 26 and 36, respectively.

Gesicki has four touchdowns in his last four games and six in his previous eight. He leads the Dolphins in red-zone targets with four, accounting for 57.14% of the team’s total targets inside the red zone. The Jaguars gave up two touchdowns to Jonnu Smith in Week 3, so Gesicki should be able to have success against a linebacker core that lacks top-end talent.

The Jacksonville Jaguars and their surprisingly impressive QB Gardner Minshew put up 480 yards of offense on what many would consider a reasonably good Titans defense last week. Minshew has continued to show his franchise that they might not need to invest or participate in the Trevor Lawrence sweepstakes.

I like the over in this contest, but I wanted to take out the variable known as the Miami Dolphins offense. As good as they looked last week, they are the definition of inconsistent with Ryan Fitzpatrick under center. Instead, I will look to take advantage of a defense missing a number of starters. The Jaguars should be able to score at least three touchdowns to get us over this prop.

I grabbed this when D.J. Chark was officially listed as questionable for the Thursday Night game. Surprisingly, Chark has only accounted for seven targets thus far. Cole is the Jaguars’ target leader with 12 through their first two games.

Whether Chark sits or not, Cole is in line to hit this over with a median performance. If Chark misses, I imagine this number rises, and we lock in some value prior to kick off.