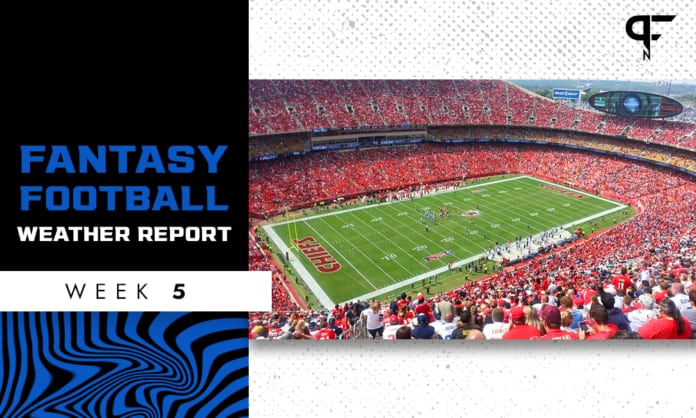 The 2021 NFL season is underway, and to help you make the best fantasy decisions, here is the NFL weather forecast and report for Week 5.

The NFL and the world of fantasy football head into Week 5 with our weekly weather report. Who doesn’t need more information to stress over? We break down the NFL slate, the weather forecast and report for Week 5, and if any of your fantasy football players could be impacted.

Note: All times are Eastern Time, and the NFL Week 5 weather report will be updated if any changes happen from the time of writing to kickoff. The NFL weather forecast for Week 5 is based on reporting from the National Weather Service. All betting lines are from the NFL’s official website.

Let’s take a look at which Week 5 games could have an impact because of rainy conditions.

Why can’t we just have nice things? Is that too much to ask for anymore? Here we have a rematch of the AFC Championship Game and what could be a preview of another to come. And here comes Mother Nature deciding to get involved. Typical primadonna.

One thing is for sure — it’s going to be wet. The question is, how much? While it’s not going to be at the level of San Francisco vs. Washington a few seasons back, we could see rainfall totals between 0.07 to 0.09 inches per hour. That’s not an insignificant amount.

For example, last week’s game between the Patriots and Buccaneers was roughly 0.07 per hour. So we could see a similar precipitation level if not a touch higher. On the positive side, the rain is not supposed to enter the area until around 5 PM ET. Thus, the field will not be overly saturated by the time kickoff comes around.

Now, when it comes to the impact, these teams are who they are. It would take a hurricane for Andy Reid and Sean McDermott to take the ball out of either Patrick Mahomes’ or Josh Allen’s hands. I still expect both of these teams to air the ball out and rack up the yards and points at the end of the day. I would not change your fantasy lineups based on this weather forecast.

Start everyone you normally would. Sure, we could see a few bobbled balls or some passes hit the ground that we might not typically see, but I’m not getting too cute. This game is full of studs on both teams and should still put up solid performances.

I am listing this in the “chance of rain” category, but it’s likely to be a non-factor. There is a chance of rain all night and into the day. By kickoff, percentages are around 40%. If it does rain, totals are likely in the 0.01 to 0.02 inches per hour rate, which is nothing. A drizzle at best/worst depending on if you are a glass-half-full or half-empty kind of person. Temperatures will be around 72 degrees with sustained winds around 10 mph.

The more significant question to me is how the injuries will impact Washington. RB Antonio Gibson is dealing with a stress fracture in his shin, WR Curtis Samuel appears to have re-aggravated the groin injury that has been an issue since the spring, and they just placed TE Logan Thomas on the IR (hamstring).

Samuel is questionable, but he was at least practicing Friday [October 8]. The concern is the risk that he suits up, plays a few downs, and then gets pulled. I would be extremely hesitant to start him in Week 5.

Gibson is also expected to play. If he does, he should be started, but he is another player I would be concerned with when it comes to his overall snap count. If anything, all of this makes me feel this could be a massive game for J.D. McKissic.

With only a few games likely to see rain (but nothing worth making lineup changes), the rest of the Week 5 calendar should be smooth sailing weather-wise.

*NYJ vs. ATL is being played at Tottenham Hotspur Stadium in London

It’s that time of year where the NFL invades London and fantasy managers around the globe forget about the time difference and end up leaving guys in their starting lineup or bench on accident.

This is especially significant for anyone rostering Calvin Ridley (personal) who is out for the game. Also, Russell Gage (ankle) did not make the trip and is out for the contest. This is one long way of saying Cordarrelle Patterson might have 86 touches, just as many touchdowns. Also, if Kyle Pitts does not break out in this game, it’s never going to happen. That’s how fantasy works, right?

As for the Week 5 weather in London, it expects to be 63 degrees, partly cloudy, with 8 mph winds. So basically, it’s a heatwave for them. You’re welcome, UK. Pip, Pip, Cheerio.

On a scale of one to ouch, how ugly is this game going to be? Sure, the Buccaneers’ defense has been nowhere near the level of expectation coming into this season. They allow the most fantasy points per game to opponents (113.3), and 47.5% of that (53.8) is from receivers.

But no one is putting Jacoby Brissett and a banged-up DeVante Parker in the same realm as the Cowboys or the Rams, who accounted for a sizeable chunk of those yards. This is a get-right game for the Bucs’ secondary.

Also, Leonard Fournette has top-five upside in Week 5. The Dolphins have allowed 6 scores to RBs this season. Four players (Damien Harris, Devin Singletary, Peyton Barber, and Jonathan Taylor) have all gained at least 90 total yards, with Harris, Barber, and Taylor rushing for 100 yards. As a defense, the Dolphins are 30th in fantasy points allowed to the position, with a whopping 30.18 PPR points per game. That’s … not good.

The Week 5 weather forecast in Tampa should feature sunny skies, 5 mph winds, and highs near 87 degrees.

Although his touchdown streak was snapped, rookie WR Ja’Marr Chase has been as good as advertised, which is weird because I was told he couldn’t catch the ball. In fact, of WRs who have seen 15+ targets, Chase is No. 4 in fantasy points per target at 2.83 and No. 2 in points per reception at 4.16. With CB Jaire Alexander now on the IR, Chase has top-10 upside in Week 5.

As for the rest of the weather forecast in Cincinnati, expect sunny skies, 7 mph winds, and 86-degree temperatures.

Ben Roethlisberger is cooked. He has a left pec injury and is apparently black and blue up and down his right side. Unfortunately, the Steelers don’t have a better option, and the extent of their passing offense is 10 yards down the field. That’s why Diontae Johnson is averaging 11.6 targets per game, and Najee Harris is No. 1 for RBs at 8.5 targets per game.

As for the Broncos, I want to shine some light on Tim Patrick. With Courtland Sutton nursing a sprained ankle, Patrick could be the team’s top option. This is not a bad thing.

Furthermore, of receivers who have seen 20+ targets, Patrick is No. 2 in aDOT (17.2) and No. 4 in intended air yards with 482 — behind only Stefon Diggs, Tyreek Hill, and Brandin Cooks, per Sports Info Solutions. He is a must-start in Week 5.

Jalen Hurts is playing some darn good football. However, everyone wants to write him off and say the Eagles need to move on. I don’t get it.

Hurts is 10th in yards (1,167), completing 66% of his passes, has a 7:2 TD to INT ratio, and is second in the NFL amongst QBs in rushing yards with 226. He has just 12 fewer rushing yards than Kyler Murray and Josh Allen combined. Hurts is also one of three quarterbacks who has finished inside the top 12 (QB1) in 100% of their games (Mahomes and Taylor Heinicke).

In the six games Hurts has started and finished, he has averaged 287 passing yards, 66.3 rushing yards, and has 14 total touchdowns. I mean, for someone who is “not a natural passer,” he’s thrown for over 325 yards in four of seven games.

The majority of your favorite teams would tank their season for a QB who could do that.

As for the weather forecast in Week 5, expect temperatures in Charlotte around 79 degrees and 8 mph winds.

Did you know Meyer was a co-professor of “character and leadership” at Ohio State? Oh, the irony. Dang, my fingers hurt after writing that. I wonder how he feels? Oops.

I need to move on before I get a fine from the NFL for taunting. Maybe I’ll hire Meyer’s PR team for how to deal with it.

Expect 82-degree temperatures, 7 mph winds, and mostly sunny skies in Jacksonville, with a near 100% chance of off-field controversy.

Nevertheless, it could be so much better. Pittman is third in the NFL in targets inside the 10-yard line (5) and nearly had a score last week. Eventually, those will start to go in the right direction.

As for the rest of the weather forecast in Baltimore, expect mostly cloudy skies, 6 mph winds, and 69-degree temperatures.

The teams below will play in optimal conditions, and there will be no effect on the passing and kicking game.

Tommy Garrett is a Fantasy Analyst for Pro Football Network and is a member of the Fantasy Sports Writers Association (FSWA). You can read all of Tommy’s work here, listen to him on PFN’s Fantasy Football podcast, and check out his contributions in PFN’s free fantasy newsletter. Give him a follow on Twitter: @TommyGarrettPFN.