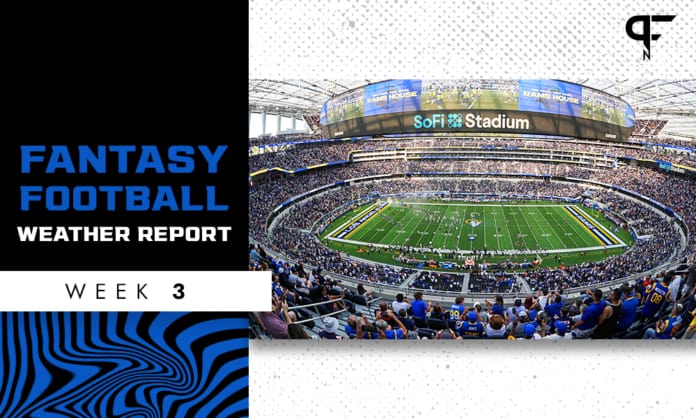 NFL Weather Report and Forecast Week 3: Gusty winds in the forecast on Sunday

The 2021 NFL season is underway, and to help you make the best fantasy decisions, here is the NFL weather forecast and report for Week 3.

The NFL and the world of fantasy football head into Week 3 with our weekly weather report. Who doesn’t need more information to stress over? We break down the NFL slate, the weather forecast and report for Week 3, and if any of your fantasy football players could be impacted.

Note: All times are Eastern Time, and the NFL Week 3 weather report will be updated if any changes happen from the time of writing to kickoff. The NFL weather forecast for Week 3 is based on reporting from the National Weather Service. All betting lines are from the NFL’s official website.

Let’s take a look at which Week 3 games could be impacted by gusty winds.

Orchard Park is known for its winds just as much as it’s known for broken folding tables. In Week 3, we’re likely to see it start to come to life for the first time. Current forecasts are calling for 15 to 20 mph sustained winds for the duration of the game. We could see gusts reach even higher.

Anytime we see sustained winds above 15 mph, my interest is piqued. Typically, this is the threshold where we begin to see wind impact both kicks and deep passes. It might not make a massive difference, but it’s noticeable to the players. But as long as it’s coming from a consistent direction and not swirling, they’ll adapt just fine. Not only is the Buffalo area notorious for its wind, but Highmark Stadium is one of the shortest stadiums in the NFL at just 110 feet. Luckily, the field is partially below ground, which helps to compensate.

Outside of it being breezy, there is just a 15% chance of rain with mostly sunny skies and 65-degree temperatures feeling closer to 50. Overall, I don’t think this is enough to force my hand and change projections for players.

While not at the level of the game in Buffalo, sustained winds will be around 12 to 15 mph in Kansas City. However, we expect to see increased gusts in excess of 25 to nearly 30 mph. Should the gusts hit at the right time, they could impact deeper passes. But I’m not worried as long as the sustained winds stay at the projected speeds. Patrick Mahomes and Justin Herbert are two of the best deep-ball passers in the NFL, and the high game total indicates Vegas isn’t concerned.

As for the rest of the weather forecast in Kansas City, expect sunny skies, a 5% chance of rain, and 85-degree temperatures that feel closer to 60.

While there is plenty of time for this to change, it is worth keeping an eye on the wind in the Bay Area. At the time of kickoff, sustained winds will be around 18 to 20 mph, with gusts peaking around 26.

But as the game goes on, the wind speeds will reduce, getting down to 12 to 15 mph by the end of the contest. It will feel a bit chilly with temperatures around 56 degrees, but that’s shorts weather for the Packers and those making the trek from Lambeau.

I am a little surprised to see the 49ers listed as favorites, given that Aaron Rodgers seems to be back in full form. He was the QB5 last week, completing 22 of 27 attempts for 255 yards with 4 touchdowns — and I don’t see him slowing down against San Francisco.

The 49ers are No. 27 in fantasy points allowed to QBs at 25.36, with quarterbacks averaging 264 yards and 1.5 TDs per contest. I don’t think we would put either of their previous opponents — Matt Ryan and Jalen Hurts — in the same category as Rodgers.