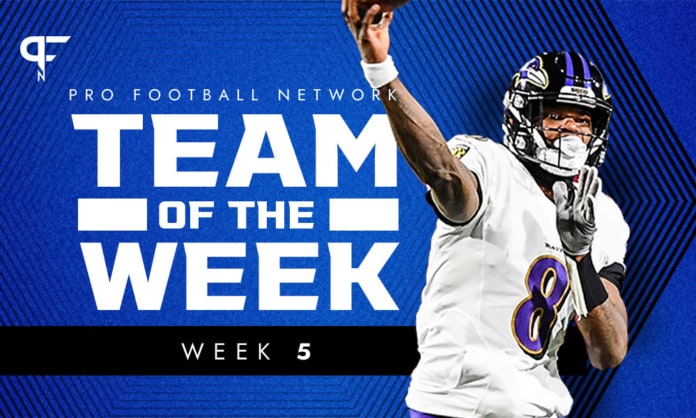 Lamar Jackson led the Baltimore Ravens to a spectacular comeback victory on Monday Night Football. Who else made our Team of the Week?

Week 5 of the NFL season has come and gone, bringing multiple performances of note. As we sift through the data and film of all 32 teams, Pro Football Network is proud to present our NFL Team of the Week for Week 5.

NFL fans were treated to the finest display of passing in Lamar Jackson’s young career on Monday Night Football. Jackson finished the night 37-of-43 passing for a career-high 442 yards and 4 touchdowns. He also added 62 yards on the ground and two more 2-point conversion passes.

With questions aplenty about his accuracy as a passer, Jackson was truly dominant in all facets as a quarterback — including his trademark versatility on the ground. Jackson was a pass-first specialist who used the tremendous gift of his legs against Indianapolis. Hitting receivers in stride or throwing them open, Jackson led his team from a 19-point deficit, playing lights-out football in the second half and overtime.

Considering the fact that he splits time with Kareem Hunt, what Nick Chubb was able to do against the Chargers was ultra-impressive. Despite the loss, Chubb ran the rock 21 times for 161 yards, manufacturing plenty of yardage on his own.

The run blocking in front of him was good at times, but Chubb made the most of seemingly every carry. He scored a touchdown on the ground and set up 2 more rushing scores for Hunt as well. The best RB duo in the league was on full display despite the result against the Chargers.

Much of the discussion around the Packers-Bengals game rightfully revolved around the 5 missed field goal attempts in the game’s final 10 minutes. What might have been lost in that drama was Davante Adams’ dominant performance on the outside.

Aaron Rodgers hit Adams for 11 receptions, 206 yards, and a touchdown on the afternoon. Cincinnati’s secondary had been playing above expectations, but Adams brought them back down to Earth with his Team of the Week performance.

Mike Williams was a dominant force for Los Angeles on Sunday afternoon. Justin Herbert had a day, and it felt like he was consistently having sensational success targeting Williams.

Hauling in 8 catches for 165 yards and 2 touchdowns, Williams was seemingly unstoppable. It wasn’t just his wins that were special —  it was who he was winning his battles against on the outside. Cleveland’s secondary has some big questions to answer after Williams torched them.

With Tom Brady having a day, Antonio Brown was largely the recipient of his QB’s huge afternoon. Brown’s route-running is rounding into form, and he’s looking more and more like his dominant self.

Brown reeled in 7 receptions for 124 yards and 2 touchdowns against the Dolphins. His highlight-reel moment came when he blew by a Dolphins defender on a simple crossing route, caught a perfectly thrown pass on the run, and sprinted past the Miami defense with ease.

Mark Andrews was clearly the best tight end on the field this weekend. He may not have separated from linebackers in coverage right away, but he didn’t have to. With Lamar Jackson buying time in the pocket, Andrews’ ability to keep plays alive and find open spots in the defense well after the snap became integral to Baltimore’s come-from-behind win.

In total, Andrews added 11 catches for 147 yards and 2 touchdowns, but even that doesn’t showcase his full impact on the game. Andrews also recorded two 2-point conversion receptions on Baltimore’s final scores of regulation, posting 16 points on his own over the game’s final 10 minutes.

Donovan Smith and the Bucs’ offense were firing on all cylinders on Sunday afternoon. Helping to create tremendous pockets for Brady to step up into, Smith was integral to Tampa’s success. Smith has been a revelation for the Bucs during their Super Bowl run.

It didn’t take a trained football eye to see Connor Williams at work on Sunday evening. During the late window, Williams and the Cowboys dominated the Giants from the start. When Cowboys running backs were making moves at the second level, it was Williams right behind them planting defenders into the ground.

Despite losing to the Saints, Chase Roullier and Washington’s offensive line were certainly not the culprits. Roullier moved off first-level defenders with ease and planted Saints linebackers in the running game. He was also top-notch in pass sets en route to his Team of the Week selection.

Largely considered the steal of the 2021 NFL Draft, Trey Smith yet again lived up to the moniker on Sunday night. The Chiefs were largely kept in check on offense, but Smith’s movement along the line did not go unnoticed. He was a mauler in the run game and terrific blocking in pass protection. Smith is the real deal.

The Chargers improved to 4-1 with a hard-earned victory over the Browns on Sunday afternoon. Los Angeles got a terrific performance from their offense. The Bolts scored 47 points, and Storm Norton was certainly a large part of that effort. Proving to be a terrific addition from the XFL, Norton has become an integral part of Los Angeles’ attack.

NFL Team of the Week for Week 5 | Defense

These were the stalwart defensive performances from Week 5.

Once again proving too much for any offensive tackle to handle, Chase Young was quick to win and alter the game for Washington. Against New Orleans, Young cruised to nearly double-digit pressures and had a strip sack on Jameis Winston.

Just like his pass-rushing moves, Young’s understanding of quarterback movement in the pocket is second to none in the NFL.

The best defensive player of this generation was at his best on Thursday Night Football. Aaron Donald altered the Seattle game plan more times than not, proving dominant in the process. He was a menace to interior linemen in the passing game, pushing the pocket on multiple occasions.

Donald’s ability to come down the line of scrimmage is just as great but not as flashy. Regardless, no one does it better than Donald, and no one did it better than big No. 99 this week.

While the Eagles’ star-studded edge rushers have largely been held in check this season, Javon Hargrave has been a man on a mission on the interior. Against Carolina, Hargrave once again pushed the pocket and changed the Panthers’ game plan. He was credited with 3 total tackles but impacted the game more often than not with his pass rush.

Much like his counterpart on the offensive line, it didn’t take a football genius to see Randy Gregory’s impact. He was a force in the backfield, winning his pass rushes more than 10 times against New York. Gregory’s impact was so great, New York actually changed plans and moved the ball away from him.

Pete Werner was a tackling machine against Washington. He ripped through Washington’s short-area passing attack with ease and made his presence known in the run game. Most of Werner’s tackles came at or around the line of scrimmage while he played the role of three-down linebacker with great success.

De’Vondre Campbell was gifted an interception in overtime as Joe Burrow wasn’t quite on the same page as his receiver. His presence on that interception showcased his keen ability to be in the right position at all times for Green Bay.

Campbell finished the afternoon with 8 total tackles and the interception, but he was even more impressive overall in coverage. The Bengals were forced to beat the Packers’ defense on the outside as Campbell patrolled the middle of the field with ease.

Back to his old ways, Darius Slay was lockdown in coverage for the Eagles against Carolina. He recorded 2 interceptions on the afternoon, sticking with his receivers in coverage all game long. Slay was sticky in the secondary but even better with the ball in the air.

Able to make plays with his back to the ball, Slay high-pointed balls and locked down the outside in the Eagles’ win.

Making a case for Defensive Player of the Year, Trevon Diggs made his league-leading sixth interception against the Giants. Diggs tracked receivers all over the field, not allowing any big gains all game. His interception came on a deep shot after Daniel Jones had been knocked out of the game, leading to another touchdown for Dallas’ offense.

A true game-changer, Diggs now has 6 interceptions on the season — 3 more than the next closest defender.

Micah Hyde was all over the field for Buffalo against Kansas City. Playing primarily free safety, Hyde was free to roam underneath for the Bills, racking up just a couple of tackles but making one of the game’s biggest plays. Hyde was Johnny on the Spot on more than one occasion. His close coverage to Tyreek Hill put him in the perfect position to take a tipped ball 26 yards for a pick-six that put the game out of reach.

A savvier play this weekend, we cannot find. Kevin Byard saw a fumbled football lying on the ground and couldn’t quite get his hands on it cleanly before falling to the ground. Byard then pushed the ball forward, rose to his feet before officially securing possession of the ball and returning it 30 yards for a touchdown.

That was on the game’s opening series, but Byard was all over the field after that. He also recorded an interception and 10 total tackles in the game against Jacksonville.

The Bucs received strong performance across the board, but Jamel Dean’s outing on defense was arguably one of the best. Making 5 solo tackles, Dean was terrific in coverage against Miami’s short-area passing attack. When Tampa needed someone to step up at cornerback, he made an interception on Jacoby Brissett to round out a great performance.

Which special teams players made our Week 5 NFL Team of the Week?

The Vikings exercised a demon this weekend after a string of bad luck with kickers at the buzzer. With 0:03 left on the clock, Greg Joseph made amends for an earlier missed kick by nailing a 54-yarder as time expired to win the game against Detroit. All told, Joseph not only exercised demons, he won the game and made his way to our Team of the Week.

Johnny Hekker’s leg was imperative to Los Angeles’ success on Thursday night. When the Rams couldn’t quite finish off drives, they turned to Hekker. Averaging 46.4 yards per kick, Hekker wasn’t asked to do much in the way of distance, but he nailed 4 of his 5 punts inside the Seattle 20-yard line.

With no kick returns for touchdowns over the weekend, we had to dig deep to find our Team of the Week returner. Tevin Coleman was singularly responsible for sparking the Jets’ offense on multiple occasions. Even if it didn’t lead to points from his offense, Coleman’s 92 total yards on kick returns were more than enough to help swing momentum in New York’s favor.