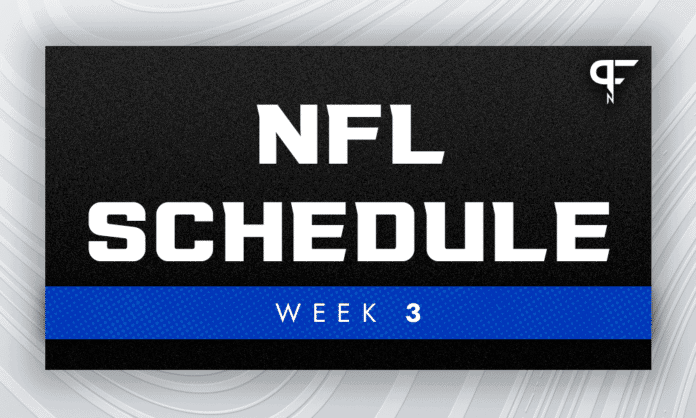 What's the NFL schedule in Week 3? Let's take a look at all of the matchups, highlighted by a clash between the Buccaneers and Rams.

The Week 3 NFL schedule provides an exciting slate of games you won’t want to miss. Eight different teams will enter the weekend with an undefeated record. Ironically, eight teams have yet to win a game through the first two weeks of the season.

Several games will be a priority to catch. However, no game will twinkle quite like the Tampa Bay Buccaneers heading to SoFi Stadium to take on the Los Angeles Rams. Both 2-0, this is an early look at a possible NFC Conference Championship preview. We’ll see in late January. It’ll be an afternoon kickoff, and FOX will have the coverage (likely to be covered by Joe Buck and Troy Aikman).

In the early slate of games on Sunday, the Los Angeles Chargers, coming off a tough loss to the Dallas Cowboys, head to Arrowhead to take on the Kansas City Chiefs. Both teams will look to keep pace with the Denver Broncos, who enter Week 3 with a 2-0 record.

Speaking of the Cowboys, they’ll host one of the early surprises of the 2021 NFL season, the Philadelphia Eagles. For the rest of the NFL schedule in Week 3, see below.

*All games are ET