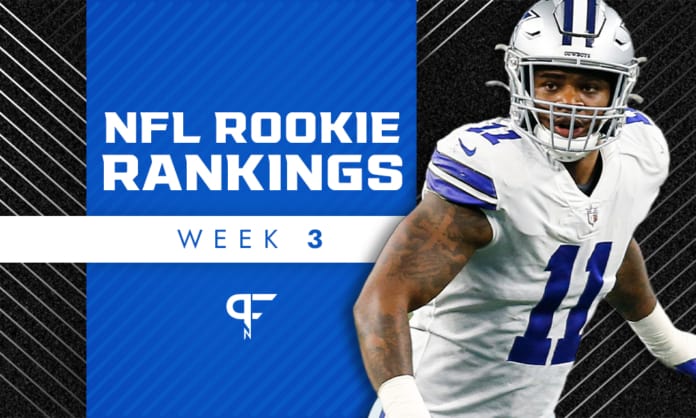 The NFL rookie rankings are out, and the top rookies have not changed much in the past week. However, don't expect to see many quarterbacks.

Which rookie in the NFL sits at the top of the rankings after two weeks? Remember, the rookie rankings are akin to our NFL Power Rankings. This is a cumulative award and not based on a single performance. This exercise aims to see which teams are getting the most out of their rookie class.

Greg Newsome has been absolutely lights-out for the Browns early in Year 1, putting him near the top of the NFL rookie rankings. Newsome had unbelievable bouts of play at Northwestern — we knew he had incredible upside.

In two games for the Browns and playing alongside already established CB Denzel Ward, teams still aren’t testing the rookie.

He’s been targeted just 4 times through two weeks, and he’s given up a total of just 6 yards. Still, that will end eventually as the rookie will take his lumps. It happens to everyone at some point. But it appears the Browns found a gem with their No. 26 pick.

This young man played a whole other dang position in Week 2 out of necessity. Somehow, it looked like he was born to play defensive end and simply moved to linebacker just a few short years ago.

Oh wait, Micah Parsons did grow up playing defensive end, and he did just switch positions a few years ago to off-ball linebacker.

Now, that doesn’t mean he should remain as a true defensive end. His best usage is still probably in a hybrid role. But it’s fun to see the rookie can play multiple positions at a high level.

He lost a rep to Dorance Armstrong on a long arm move from him that was quite strong. There was also an Osa Odighizuwa rep from the 3-tech that Rashawn Slater struggled with as well. The guard pulled, and Slater couldn’t get his face across in time.

Nevertheless, 2 reps out of 71 isn’t a horrible ratio, especially given only the run ended poorly for the offense.

Rondale Moore has made a massive difference so far in the Arizona Cardinals offense. Thus, it should be no surprise that he lands close to the top of the NFL rookie rankings.

Moore ranks 11th in the NFL in receiving yards through two weeks. His usage is reminiscent of Deebo Samuel’s as a rookie. Moore’s current aDOT sits at 3.9 yards, but he averages 16.6 yards per reception. You do the math on his impact after the catch.

Additionally, Moore is averaging 4.82 yards per route run, which is 1.86 yards more than the league leader in 2020 (Davante Adams).

Aside from one penalty against Green Bay, Penei Sewell was once again outstanding playing on the left side. His footwork is more natural there, especially when setting vertically as a pass blocker. As a run blocker, his athleticism and brute power are evident, although he could work a bit on maintaining good positional leverage.

The only question on everyone’s mind is whether he stays on the left side or goes back to right tackle when Taylor Decker returns to action.

Jaycee Horn has been great in his first two games of NFL action. In fact, from a purely statistical standpoint, he’s been close to the top rookie in the rankings. He’s missed a few tackles but has been outstanding in coverage.

Horn’s also played everywhere on the back end. He’s played in the box, in the slot, out wide, and on special teams.

So far, he averages 14.2 snaps per target and only allows a reception once every 35.5 snaps. Only Newsome can match that output early in their careers.

This young man has been decent so far in 2021. The Chiefs’ center has not allowed a sack, hit, pressure, or hurry through 78 pass-blocking snaps.

This team is unfair. They’re starting five new offensive linemen in 2021. Kansas City traded for Orlando Brown, signed Joe Thuney, drafted Creed Humphrey in Round 2 (where he should never have fallen to), drafted Trey Smith in Round 7 (I can only imagine he fell due to health concerns), and had Lucas Niang return after opting out in 2020.

And they’re better than they were in 2020, even when everyone was healthy. Humphrey had one bad snap against Baltimore, and that shouldn’t happen. However, he was otherwise outstanding and has been so in his first two NFL games.

Both Moore and Jaylen Waddle have more receptions than Ja’Marr Chase, but neither can boast 20+ yards per reception and over a 60% completion rate. His aDOT sits at 17.9 yards, which means when he is getting targets, they’re deep downfield.

It will be fascinating to see how his usage evolves throughout the season. The Bengals’ offense is in a tough spot. They don’t have a sufficient offensive line, and their quarterback is super comfortable in empty. At least, Zac Taylor thinks he’s still comfortable with it.

It’s tough to predict if Chase can lead the Bengals as a rookie, but he’s proved that he has a bright future in the league.

The Packers haven’t run the ball well so far in 2021, but that’s not Josh Myers’ fault. He’s not necessarily a people mover, but his ability to almost grit himself to the right spots to seal rush lanes is admirable. It’s one of the reasons he falls within the top 10 of the NFL rookie rankings. His technical proficiency got him to where he is now.

One quarterback performance needs a bit of recognition.

Mac Jones’ play has been nothing but game management at this point, but he’s driving the bus between the lines. So far, he’s completed 74% of his passes and is averaging just under 7 yards per attempt. However, he’s still completing more passes than expected.

These players just missed out on their own blurb, but each still has had a recognizable two-week stretch. The rookie offensive linemen have been particularly impressive.