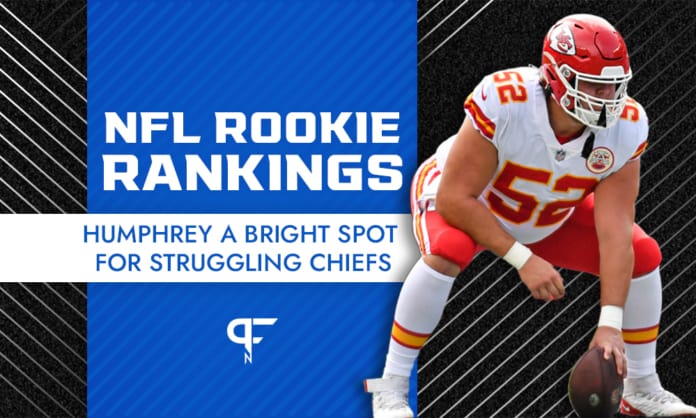 The NFL Rookie Rankings is a list of the top NFL rookies so far in 2021 through five weeks. Who rose and who fell in Week 5?

As a wannabe NFL Draft scout at heart, getting to do the NFL Rookie Rankings each week and acknowledging the top rookie performers is an honor. Many of the players on this list were highly touted by the draft community, but a few flew under the radar. The first-year players listed at the top have performed like some of the best players — not just rookies — in the NFL. It wouldn’t surprise me to see a few of them receive All-Pro votes.

The top rookie performers in the NFL have played at the highest level each week. But each player also has the potential to slip out of the top 10 if they don’t keep it up.

Transparency is important. I don’t necessarily enjoy watching interior offensive line play. But when it’s #52 on the Kansas City Chiefs, it’s all I care to watch.

Sure, Patrick Mahomes is usually superhuman. Tyreek Hill is a human joystick. Heck, Travis Kelce is the best TE in the NFL. But watching Creed Humphrey perfectly snap the ball down in and down out while also masterfully executing in almost every situation is therapeutic.

I toyed with the idea of moving Humprehy up last week, but I felt it important to continue to crown Greg Newsome, who had been unbelievable. But given that Newsome has been sidelined the past two weeks, it felt right to leave him off the list until his return. Humphrey has been the top NFL rookie through five weeks.

He’s been nearly perfect in 2021. His positional leveraging in the run game is exquisite, and he’s driving folks into the second level with more frequency than I expect from someone who starts each rep with one hand effectively tied behind his back.

The fact that the NFL let Humphrey drop to the end of Round 2 is pathetic. I need answers.

From linebacker to pass rusher back to linebacker, Micah Parsons is still making a difference on defense. It’s more fun to watch him at linebacker because he often gets to move uninhibited by other humans. His physical abilities are chief among the reasons he remains high in the NFL Rookie Rankings.

The way Parsons moves is mind-bending. He teleports as he closes on a ball carrier. He calls himself a lion, and he hunts like a massive jungle cat. Parsons calmly stalks his prey until it’s time to attack, and by then, they have nowhere to go.

And he still hit Daniel Jones 3 times in passing situations, proving he offers value as a pass rusher from the linebacker position.

I knew Cincinnati was the best fit for Ja’Marr Chase. I imagined he would be the most productive rookie receiver when the dust settled. But I may have undersold his abilities as a prospect just ever so slightly.

He’s been absolutely dominant through five NFL games. He scored another touchdown in Week 5 and had his best statistical outing yet, securing 6 catches for 159 yards. As long as Joe Burrow is healthy, which is a big question given how … heroic … he plays, Chase will continue to be his top target.

Rashawn Slater had his worst statistical game as a pro, but that was going to happen against the Cleveland Browns. Myles Garrett is decent at football. He’s going to win a one-on-one matchup here and there because, like Thanos, he is inevitable.

However, in most one-on-one opportunities, Slater performed wonderfully. He got beat on a spin move to the inside that was facilitated by an RB chipping Garrett from the outside, and he lost once more on a stunt where he got out of position as he attempted to work inside on a looping Garrett.

Overall, Slater showed how impressive he is as a blocker, but also displayed where he still has some room to grow. He’ll get back on track next week, but he’ll have to contend with the young man breathing down his neck in the NFL Rookie Rankings.

Note to self: Always bet on the athletic upside at pass rushing positions! I freely admit that from what I saw at Penn State I thought it would take a long time for Oweh to succeed at the NFL level if he ever did.

Not only has he proven me wrong, but he’s proven me wrong with an immediacy I’m not sure I’ve ever endured from a draft prospect. But that is fine because more good football players are never a bad thing unless your ego is too big to handle being wrong.

Oweh had 1 sack, 1 forced fumble, and 2 QB hits in the game against the Colts. His unimaginable athleticism allows him to feast on lesser linemen, and the Colts have plenty of those right now.

Oweh plays with his pants on fire. If he becomes technically proficient, he has the potential to be the single most dangerous pass rusher in the NFL. He’s that gifted!

In a weird turn of events, Owusu-Koramoah was one of two Ohio-based players — joining Joe Burrow — who suffered a throat contusion on Sunday. Despite that, he played nearly double the snaps he had in any previous week. Now, there is no reason to keep him hidden as one of the NFL’s top rookies.

JOK is an outstanding coverage player, which shouldn’t be a surprise considering he effectively played safety/slot at Notre Dame. But he’s already better as a run defender than may have been anticipated given his lack of reps as a traditional linebacker in college. It made sense to ease him in, but he’s proven he can handle the full workload and that he’s ready to rise in the NFL Rookie Rankings.

Josh Myers hasn’t been the same dominant player Humphrey has been, but he’s been as solid as most rookies come. His work on Green Bay’s interior has been a massive plus as the rest of the offensive line struggles through injury.

He missed this week against the Bengals, and Cincinnati affected the pocket quite a bit against a depleted Packers offensive line. His absence helped prove he’s been one of the top NFL rookies so far.

While Osa Odighizuwa didn’t have the same impact against the Giants that he’d had against other teams in recent weeks, he still rises one spot in the NFL Rookie Rankings. He posted another QB hit and a TFL in Dallas’ win over the division-rival Giants.

His explosiveness and length have provided him with a base of tools to survive against NFL strength, but Odighizuwa has also excelled technically as a rookie.

It helps to play on a defense filled to the brim with talent, but Gregory Rousseau is carving out his own important role on Buffalo’s defense. As it turns out, being in the right place at the right time might actually be translatable because he’s still doing it at the NFL level.

Rousseau’s length is a weapon, and he appears more explosive than he was at Miami. He’s staying fresh in the Bills’ rotation, and he’s playing with his pants on fire, running sideline to sideline chasing Patrick Mahomes on Sunday Night Football.

He had an interception, a sack, and a TFL against the Chiefs. If he keeps this up, it’ll be tough not to keep moving him up the NFL Rookie Rankings

I don’t want to hear about what some of the numbers say about Surtain in coverage. I simply do not care. There has not been a more pro-ready cornerback come into the NFL in a long, long time. It’s made him one of the top rookies in the NFL through five games.

What he does on a down-to-down basis technically as a cornerback is sublime. In the NFL, with rules geared heavily toward passing success, I can’t find a better fit to combat that. Jaycee Horn was more dominant early on, and Greg Newsome was flashing elite skills, but Surtain will be one of the most consistent players in the league for years to come.

That’s what happens when you’re the son of a Hall of Famer, and you played under Nick Saban in college. You become a wizard.