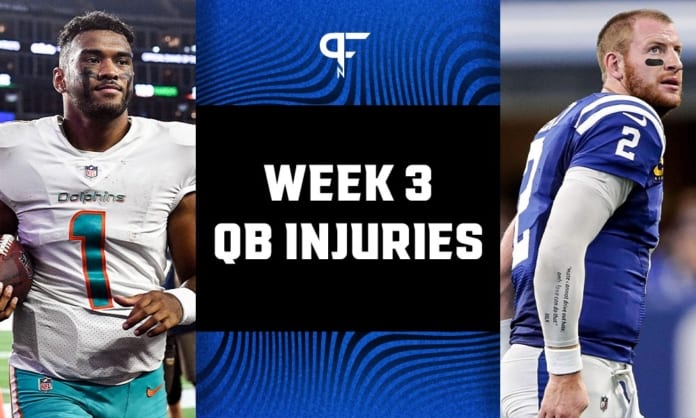 Week 3 NFL injury report: Miami quarterback Tua Tagovailoa (ribs) has been ruled out for Sunday and three other NFL starters are iffy.

The NFL Week 3 quarterback picture is coming into focus. Wednesday is the start of the workweek for players, including four quarterbacks who are dealing with new injuries: Tua Tagovailoa (ribs), Andy Dalton (knee), Carson Wentz (ankles), and Derek Carr (ankle). Did they practice Wednesday? And will they play this weekend? Here’s the latest NFL injury report on what we know about each.

The initial belief was that Tua did not suffer any breaks, but further tests revealed he indeed cracked ribs on the left side. With Tua out, Jacoby Brissett will start Sunday against the Las Vegas Raiders — and perhaps beyond. Former Chargers team physician David Chao believes Tua is unlikely to play in Week 4 against the Colts as well.

The Miami Herald reports the Dolphins plan to make significant changes to their starting offensive line this weekend — and it’s needed. Unfortunately for Tua, it’s coming a week too late.

Honestly, Carr wouldn’t have even been on our radar if not for Jon Gruden volunteering Monday that his starting QB is questionable for the Dolphins game.

Expect him to play. Carr didn’t miss a snap despite dealing with some obvious discomfort. He practiced fully Wednesday and “is ready to go,” Gruden said Wednesday.

If Carr is somehow unavailable Sunday, third-stringer Nathan Peterman would start, as primary backup Marcus Mariota is on injured reserve.

Carr has been lights out through two weeks, completing two-thirds of his passes for 817 yards and 4 touchdowns. Relatedly, the Raiders are 2-0.

“It’s an explosive team,” Flores said of the Raiders.

With Andy Dalton “still battling through” the knee injury that knocked him out of the Bengals, Bears coach Matt Nagy announced Wednesday that Justin Fields will make his first career start against the Cleveland Browns Sunday.

Fields finished the Cincinnati game and helped preserve the win, but he was not particularly impressive (6 of 13 for 60 yards and an interception). Nick Foles will serve as Chicago’s backup Sunday when the Bears visit the undefeated Browns.

Dalton seems to have avoided a major injury, but he’s surely sore. On the season, Dalton has completed 73.5% of his passes, but that’s a pretty empty stat. His 5.3 yards per attempt average is putrid.

But Nagy reiterated that when Dalton is healthy, he will start for Chicago — which could create a scenario in which Fields is potentially sent to the bench after a good game.

Not one ankle, but two, are balky after yet another health setback for the Colts’ injury-prone QB1. Wentz is in danger of missing a game due to injury for the fourth time in six NFL seasons — and this is after a training camp during which he underwent foot surgery and caught COVID-19.

Wentz was not in a walking boot and participated in the Colts’ Wednesday walkthrough, according to Colts beat reporters. He said that he is still sore and his right ankle is much worse than his left.

The last few days have consisted of “a lot of treatment,” Wentz said, per WTHR. “Throwing kitchen sink at it trying to get healthy.”

If Wentz is unavailable to play Sunday against the Tennessee Titans, it’ll be Jacob Eason under center. Terrible timing for a Colts team staring into the abyss of 0-3.