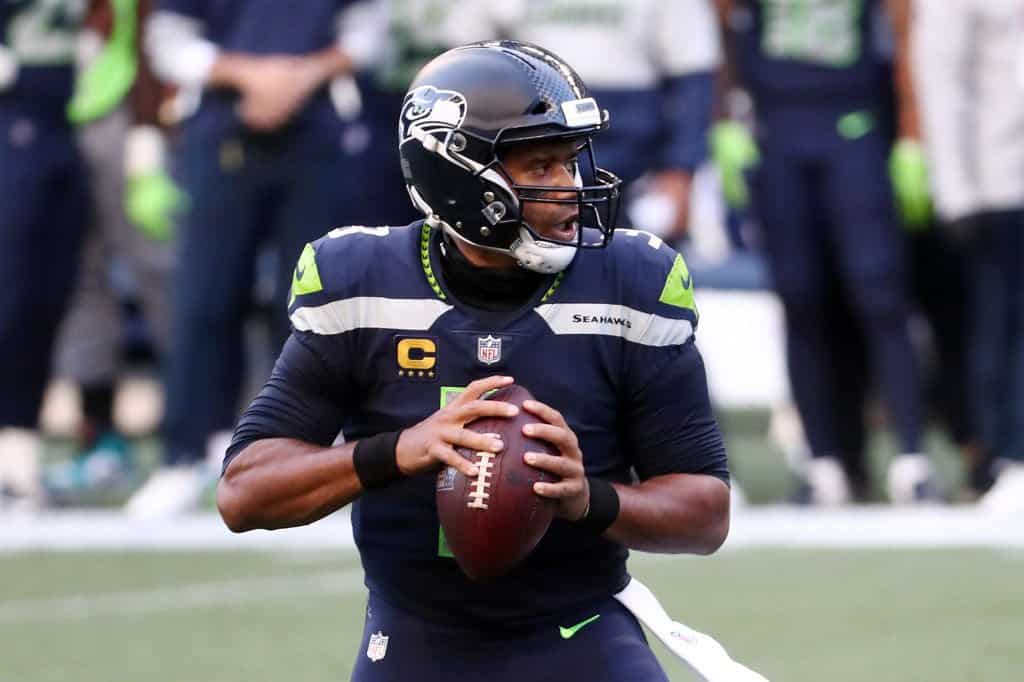 Here’s the deal with NFL Power Rankings. They are not predictions. If a team projects to have an easy or difficult schedule ahead of them, that matters not for this exercise. These are very simply a list of how good each team is right this minute. As for these Week 4 NFL Power Rankings, here’s how all 32 teams rank heading into the last week of the first quarter of the season.

Before we get started with our Week 4 NFL Power Rankings, be sure to check out Mike Tanier’s NFL Week 3 Recap after you take a look through this list of 32 teams. This week, we’re starting the NFL Recap with why the Taysom Hill experiment needs to stop, NFL Week 3 Duds ‘n’ Studs, including Nick Mullens, Tyler Lockett, and a look at 3-0 teams in the AFC – Bills, Steelers, and Titans. We also dig further into the struggling Philadelphia Eagles and their rough start to the 2020 season.

It just keeps getting worse for the Jets. Sam Darnold deserves plenty of blame and the Trevor Lawrence watch is on in New York, but there is just such little chance of success here for Darnold or really any other quarterback. Oh, one of the only bright spots this year – Mekhi Beckton – left this game with a shoulder injury. The Jets are a distant 32nd in the NFL right now.

Even with the 49ers roster decimated by injuries, the New York Giants got blown out in Week 3 and are now winless for the season. Daniel Jones wasn’t nearly accurate enough to make up for a nonexistent running game. The Giants barely possessed the ball for 20 minutes against the San Francisco 49ers.

Dwayne Haskins really continues to struggle although he really isn’t getting much help in Washington. But he has to protect the football better. The Football Team is very light on weapons besides Terry McLaurin around Haskins and their offensive line was totally overmatched against Cleveland. And Washington lost Chase Young early in this game.

On Thursday night, the Jacksonville Jaguars got down early and really missed DJ Chark. Without Chark, Jacksonville just didn’t have a big-play threat, which is quite the indictment of where this team is right now.

Brett Rypien finished another Denver loss against the Buccaneers, who controlled this game from the beginning. Things are spiraling downward very quickly in Denver, but at least they get to face the Jets on Thursday night.

Carolina got up early on the Chargers and Teddy Bridgewater managed the game very well. It was enough to get the win, but this team was obviously far too reliant on their kicker and will need to do a better job of turning drives into touchdowns.

The Lions intercepted Kyler Murray three times and won the game on a Matt Prater field goal as time expired. Detroit didn’t have a lot of success running the ball, but Matthew Stafford had a very solid and efficient outing. Jeff Okudah flashed superstar potential.

The Miami Dolphins traveled to Jacksonville on Thursday night and on a very short week, played a very solid all-around game. Ryan Fitzpatrick played a strong game, but you still have to wonder when we will see Tua Tagovailoa.

Joe Burrow and the Bengals went to Philadelphia and took the Eagles to overtime in a battle that eventually ended in a tie. Burrow was sacked eight times and the Bengals pass protection is remarkably poor as he dropped back to pass 52 times. This team needs to lean heavier on Joe Mixon as both a runner and receiver.

It has been really tough going for Philadelphia this year. After Dallas Goedert went out early in this game, it became apparent that Zach Ertz was the Eagles only real receiving threat of note. Carson Wentz played better, but there were just too many missed opportunities for the Eagles in this game overall. But hey, at least the Eagles didn’t lose this week.

This was far and away from the best Minnesota has played yet this year, but they still couldn’t pull it out against the Titans and now sit at 0-3. There is good news though: The Vikes got back to their brand of football with Dalvin Cook running for 181 yards. Plus, their first round pick, Justin Jefferson caught seven passes for 175 yards. So that is promising at least.

A desperate Texans team played Pittsburgh tough and Deshaun Watson was outstanding, but it wasn’t enough. Fortunately, possibly the Texans’ three most difficult games on their schedule are now behind them. Houston’s rushing discrepancy difference is simply putrid though, as they do nothing on the ground and can’t stop the run whatsoever. In Week 3, the Texans allowed 140 more yards on the ground than they gained.

Coming in at number 20 on the Week 4 NFL Power Rankings list are the Las Vegas Raiders. It should shock no one that Bill Belichick did everything in his power to take Darren Waller out of this game and it obviously worked. That being said, it was the Raiders defense that just got bullied by Belichick’s squad. Losing three fumbles didn’t help the cause either.

Despite racking up 90 points over the first three weeks of the season, Atlanta now amazingly sits at 0-3! Blame the defense all you want…and they deserve SO much blame…but Matt Ryan threw a brutal interception in this game that clinched it for Chicago. Atlanta couldn’t eat clock when it mattered most. The Falcons had a double-digit fourth-quarter lead in this game and lost again. These collapses don’t bode well for Dan Quinn.

Justin Herbert started for a second straight week, but the offense turned the ball over three times in the first half and Herbert occasionally looked overwhelmed against one of the league’s worst defenses. Still, he threw for 330 yards and did a lot of good things, even in a losing effort.

The Browns put up 34 points against Washington with Baker Mayfield only having to throw for 156 yards although it looks like Mayfield and Odell Beckham are getting better in tune with one another. Nick Chubb showed once again why he is one of the NFL’s elite ball carries.

Mitch Trubisky was benched in favor of Nick Foles, something that shouldn’t come as a big surprise even though the Bears were undefeated coming into Atlanta. Many want to talk about the Falcons blowing leads but give Chicago credit for storming back yet again this year. Allen Robinson was an unstoppable force on Sunday. And now they are 3-0.

Kyler Murray threw three interceptions as Arizona dropped their first game of the season against the Lions. He’s still learning. Overall, the Cardinals didn’t play great, but at least DeAndre Hopkins continues to light up every defense he faces in his new uniform.

The Patriots used an entire stable of runners to just keep pounding Las Vegas’ very generous run defense. They ended the day with 250 rushing yards while winning the time of possession battle by nearly 10 minutes.

In a barnburner in Seattle, the Cowboys went to toe to toe with Russell Wilson and the Seahawks to the very end. Dak Prescott fell just short in this game, but what an effort by him and this entire offense. There is no shame in this loss for Dallas, who is the clear top team in the NFC East right now.

In a very workmanlike and professional manner, the Buccaneers traveled to Denver and disposed of the Broncos without much resistance. Tampa Bay isn’t getting a lot of style points as they figure this thing out, but they keep getting the job done and have one of the league’s best defenses.

In an awesome Sunday Night game, Alvin Kamara was the most awesome of them all. He made a strong case to be the league’s best running back right now and really stepped up with Michael Thomas sidelined. But as was the case last week, penalties really hurt the Saints.

Indianapolis dominated the Jets to the point where they could pull Philip Rivers with about ten minutes still left in the game. The Colts have a quickly emerging weapon in Moe Allie-Cox and Rivers looks more and more comfortable each week.

Another productive day by Ryan Tannehill greatly helped the Titans get to 3-0 barely over a desperate Minnesota team, but let’s give the much-maligned Stephon Gostkowski a ton of credit as well. He hit all six of his kicks, including a 55-yard game-winner.

Obviously, things started very slow for the Rams in Buffalo, but give Jared Goff credit. He is having an excellent year and leading an excellent Rams offense. On this day, it was Darrell Henderson that did the bulk of the work on the ground. The Rams couldn’t get the win against a quality opponent, but the offense is humming.

Give San Francisco a ton of credit for embarrassing the Giants while starting a ton of backup players. Nick Mullens fits Kyle Shanahan’s system perfectly and played a very clean game. The 49ers never punted in this game. Despite their immense injury hardships, the 49ers only have one loss and could set up well to be a dominant team going forward.

The Pittsburgh Steelers defense was impressive but not as dominant as the first two weeks of the season. On the other side of the ball, this Steelers offense has a very wide variety of weapons that Ben Roethlisberger is using very well now. Houston was the best team the Steelers played yet this year, but Pittsburgh’s defense didn’t allow a point in the second half.

Buffalo winning this game 28-0, but did hang on (helped by a questionable pass interference penalty) to edge out the Rams 35-32. Josh Allen sure is fun to watch and put up another strong performance to imply that he is here to stay…as are the Bills.

Without Davante Adams, the Packers offense remained outstanding with Aaron Rodgers making great throw after great throw and elevating everyone around him. Matt LaFleur is now 16-3 as the Packers head coach in the regular season.

Russell Wilson is playing at another level right now with back to back five touchdown games and 14 over three games. Is Tyler Lockett the most underrated wide receiver in the NFL? However, the Seahawks did lose Jamal Adams and Chris Carson to injuries in this game.

The Chiefs were obviously the better team on Monday night, but Baltimore made far too many self-induced mistakes. Plus, it is becoming more and more apparent just how important it is for the Ravens to be playing with a lead against the top teams in the NFL.

Kansas City made a huge statement in Baltimore. They are the champs and everyone else is going to have to knock them off their pedestal. Until further notice, the Chiefs are number one in the NFL and here in my NFL Week 4 Power Rankings.

In this article:Featured, featured, Power Rankings