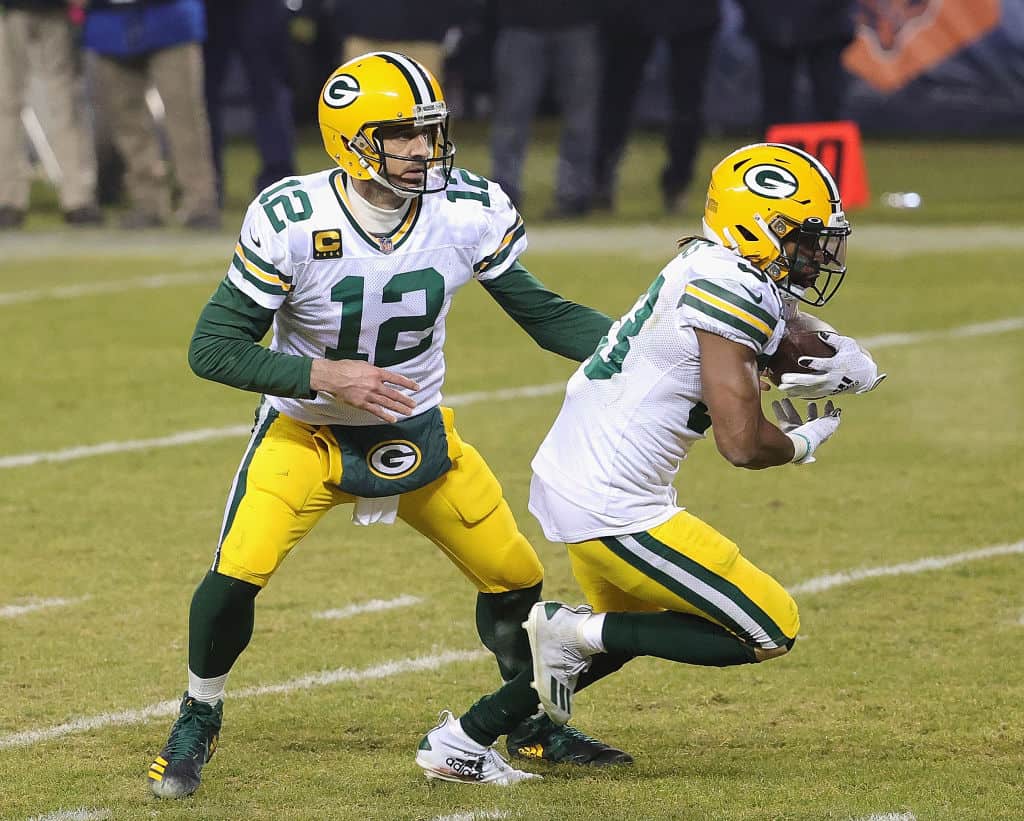 After what was an extremely entertaining Divisional Round, the NFL moves one step closer to crowning the next Super Bowl champion in early February. To get there, teams will have to make it through the next step in the NFL schedule — the Conference Championships. With two games this weekend, we break down the 2020-2021 NFL Playoffs schedule and where to watch the games.

I don’t know about all of you, but it sure seemed like everyone on Twitter was watching the Nickelodeon broadcast. Honestly, I thought it was great. Sometimes a breath of fresh air is needed, and a massive tip of the cap to Nate Burleson and Noah Eagle for his game coverage.

The fact they were able to explain the catch rule to a bunch of 5-year-olds sold me. Also, a moment of silence to Sean Payton’s Jordan 11’s, who ended the day covered in slime.

While the NFL Divisional Round games aren’t on Nickelodeon’s schedule this weekend, coverage won’t be an issue.

In all likelihood, Aaron Rodgers is going to win the NFL MVP award. But on Saturday’s schedule for the 2020-2021 NFL Playoffs, the challenge facing him might be one of the toughest of the season so far.

No NFL team scored more points during the regular season than the Green Bay Packers. Nobody has played better defense than the Los Angeles Rams. This will be the first time the NFL’s top-ranked scoring offense and scoring defense have faced off in the postseason since the New England Patriots-Atlanta Falcons Super Bowl on Feb. 5, 2017.

The matchups in this Divisional Round game are fascinating. Arguably the best receiver in the NFL, Davante Adams, who just scored 18 touchdowns in 14 games, facing one of the true shutdown corners in Jalen Ramsey. Also, the matchup of Aaron Donald getting pressure on Aaron Rodgers. Donald might be the best player in the entire league, even if he is banged up right now.

In what will be the last of the NFL games to kick off this weekend, we see two of the all-time greats face off in the twilight of their careers. Honestly, this seemed inevitable. Once Tom Brady landed in Tampa Bay, he and Drew Brees and the Saints seemed destined to collide. It was just a matter of which round of the playoffs we’d see them on the NFL schedule.

So far this season, it’s been Brees who has had the last laugh. In their two regular season meetings, the Saints are 2-0 with a combined score of 82-26. Including a Week 9 matchup where the Buccaneers scored only a field goal. But this is the Divisional Round, and nothing that happened previously on the NFL schedule matters now.

No one knows what winning in the playoffs means more than Tom Brady. No quarterback has more experience in the playoffs than the six-time Super Bowl winner. If Brady wins this matchup, he will double the number of wins of the QB in second place, Joe Montana (32 to 16).

Does lightning strike twice? Scientifically, yes, it can. But something tells me Patrick Mahomes might have something in store for Baker Mayfield and the Browns. Out of all the Divisional Round games on the 2020-2021 NFL Playoffs schedule this weekend, this has the largest favorite. According to DraftKings, the Browns face a 10.5 point favorite Chiefs team on the road.

If the Cleveland Browns can pull off a massive upset and take down the defending Super Bowl Champions, the magic number is 32.

In nine career losses as a starter, including playoffs, Patrick Mahomes’ teams have averaged 31.3 points per game. Only once were the Chiefs held below 24 points, and three times below 30 points.

It’s going to take an incredible first-quarter scoring onslaught like the Browns put together last weekend to make this happen. Once again, I ask, can lightning strike twice?

For those of legal drinking age, please don’t start playing the game where you take a drink every time someone brings up Lamar Jackson and snow. Trust me, it won’t turn out well. For you, not for Jackson. I have my Divisional Round weather forecast that will cover this, but I think the snow factor is being overblown.

This game places two of the best dual-threat quarterbacks directly in the prime time spotlight. Allen set new Bills’ records with 396 completions, 4,544 yards passing, and 37 touchdowns. He then added 421 more yards on the ground along with eight touchdowns, bringing his regular season total to 46 thanks to a sneaky receiving touchdown in Week 10 against the Cardinals.

Jackson, meanwhile, finally looks like his former-MVP self after a sluggish start to the season. Jackson finished with 2,757 yards and 26 touchdowns through the air and 1,005 yards and seven touchdowns on the ground. He has been on fire as of late and could exploit a deficiency in the Buffalo defense.

Since Week 13, Jackson has accounted for 13 touchdowns and 566 yards rushing. Jackson had 133 of those yards come just last week on 16 carries. The Buffalo Bills were 21st in rushing yards allowed to QBs. They gave up seven touchdowns, which was tied for second-highest in the league.

Of all the Divisional Round games scheduled for the 2020-2021 NFL Playoffs this weekend, this game is the one I am the most excited about. No table will be safe if the Bills head to the AFC Championship.