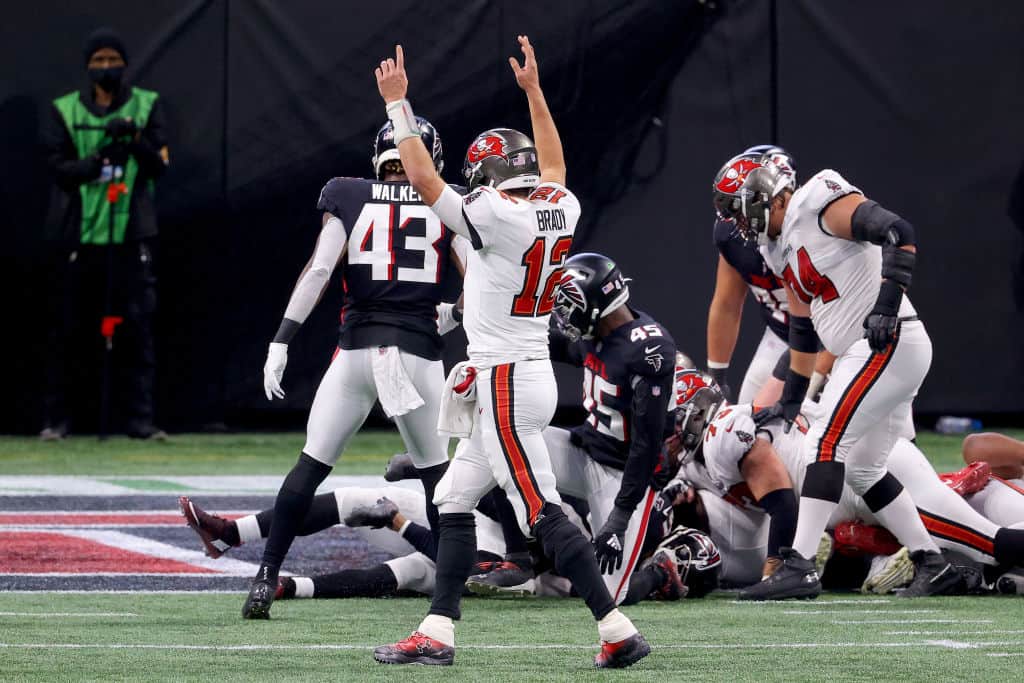 ATLANTA, GEORGIA - DECEMBER 20: Tom Brady #12 of the Tampa Bay Buccaneers celebrates after Leonard Fournette #28 scored a one yard touchdown against the Atlanta Falcons during the third quarter in the game at Mercedes-Benz Stadium on December 20, 2020 in Atlanta, Georgia. (Photo by Kevin C. Cox/Getty Images)
What's in this article? Click to show
NFL playoff picture for Week 16
NFL playoff scenarios heat up in Week 16
Week 16 clinching scenarios

The NFL standings have stayed fairly static through the first two-thirds of Week 15, but there have been some significant developments in the NFL playoff picture heading towards Week 16. With the 2020 NFL playoff race heating up, let’s take a look at the AFC and NFC playoff standings.

After around 30 years of featuring 12 playoff teams, six for each conference, the NFL expanded their playoffs to a 14-team system for the 2020 season. Each conference will now feature three wild card teams instead of two for the first time since the 2002 expansion. The additional wild card team places a premium on the number one seed. Only that team receives a bye in the first weekend of the playoffs.

The remaining six teams in each conference will face off on wild card weekend, as the three remaining divisional winners hosting the three wild card teams (#2 vs. #7, #3 vs. #6, and #4 vs. #5). This change in the NFL structure has significantly altered the playoff scenarios and how we view both the playoff picture and standings in the NFC and AFC.

Outside looking in: Baltimore Ravens (9-5)

The Bills joined the Chiefs and Steelers in confirming playoff places with their win in Week 15. The AFC has become quite interesting with the Steelers’ loss to the Cincinnati Bengals this past week. All of a sudden, the AFC North division is once again in contention with the Browns only one game behind Pittsburgh. Cleveland plays the Jets next week, meanwhile, Pittsburgh plays the Colts. Their clash in Week 17 could be for the AFC North.

The Colts and Titans both won to keep their race for the AFC South neck and neck. Victories for the Dolphins and Ravens means they both remain in their spots in the 2020 NFL playoff race. Neither team can afford to stumble down the stretch.

Meanwhile, the Patriots slipped out of the playoff race in the AFC for the first time in 11 years. With the Dolphins win on Saturday night, the Raiders are officially eliminated from playoff contention.

The NFL playoff picture on the NFC side has many permutations entering Week 16. The Green Bay Packers put themselves one step closer to clinching the first-round bye with a Saturday night victory over the Carolina Panthers.

The Seahawks have temporarily taken control of the NFC West ahead of their Week 16 matchup with the Rams. With the Cardinals loss the to 49ers this week, they are now likely to drop our of the seventh seed. The Bears play the Jaguars with week, and with a win, they take over the seventh seed.

The Buccaneers’ have clinched a playoff berth with their victory over the Detroit Lions. However, because of the Saints’ win over the Vikings on Christmas, the NFC South is no longer in contention. The Vikings have also been eliminated from any chance at making the wild card.

Meanwhile, losses for both the Washington Football Team and the New York Giants keeps the NFC East open for the Eagles and Cowboys to stake a claim.

In the AFC, the Chiefs have their future in their own hands. Win out, and they are the number one seed. The Bills have now leapfrogged the Steelers for the second seed and a guarantee of a home game in round two of the playoffs.

The Titans can hold the Colts at bay by winning out, but both have tough games in Week 16. The Titans host the Packers on Sunday Night Football, while the Colts travel to Pittsburgh to face the Steelers.

The situation when it comes to the NFC playoff standings in the 2020 NFL playoff race is extremely convoluted from top to bottom. The Packers cannot afford a mistake against the Titans in Week 16, with the Seahawks, Rams, and Saints all sitting right behind them.

The NFC East remains extremely open following the loss by Washington and the victory for the Dallas Cowboys. All four teams can still win that division heading towards Week 16.

With just two weeks remaining, the NFL playoff picture is becoming much clearer heading into Week 16. Which teams can lock up a spot in the 2020 NFL playoff race in Week 16?

The Kansas City Chiefs can clinch a first-round bye in Week 15 if:

1) The Chiefs defeat or tie with the Falcons

2) The Steelers lose to or tie with the Colts

3) The Bills lose to or tie with the Patriots

The Pittsburgh Steelers can clinch the AFC North if:

1) The Steelers defeat the Colts

2) The Browns lose to the Jets

The Tennessee Titans can clinch the AFC South if:

The Tennessee Titans can clinch a playoff berth if any of the following scenarios occur:

1) The Titans defeat the Packers

2) The Dolphins lose to the Raiders

3) The Ravens lose to the Giants

The Indianapolis Colts can clinch a playoff berth if any of the following scenarios occur:

The Cleveland Browns can clinch a playoff berth if any of the following scenarios occur:

Four teams can clinch playoff spots in the NFC playoff standings in Week 16.

The Green Bay Packers can clinch the first-round bye if any of the following scenarios occur:

The Seattle Seahawks can clinch the NFC West if:

1) The Seahawks defeat the Rams

The Los Angeles Rams can clinch a playoff berth if any of the following scenarios occur:

1) The Rams defeat or tie with the Seahawks

2) The Bears lose to or tie with the Jaguars

3) The Cardinals defeat or tie with the 49ers

The Washington Football Team can clinch the NFC East if either of the following scenarios occur:

2) Washington ties with the Panthers, the Giants lose to the Ravens, and the Cowboys and Eagles tie