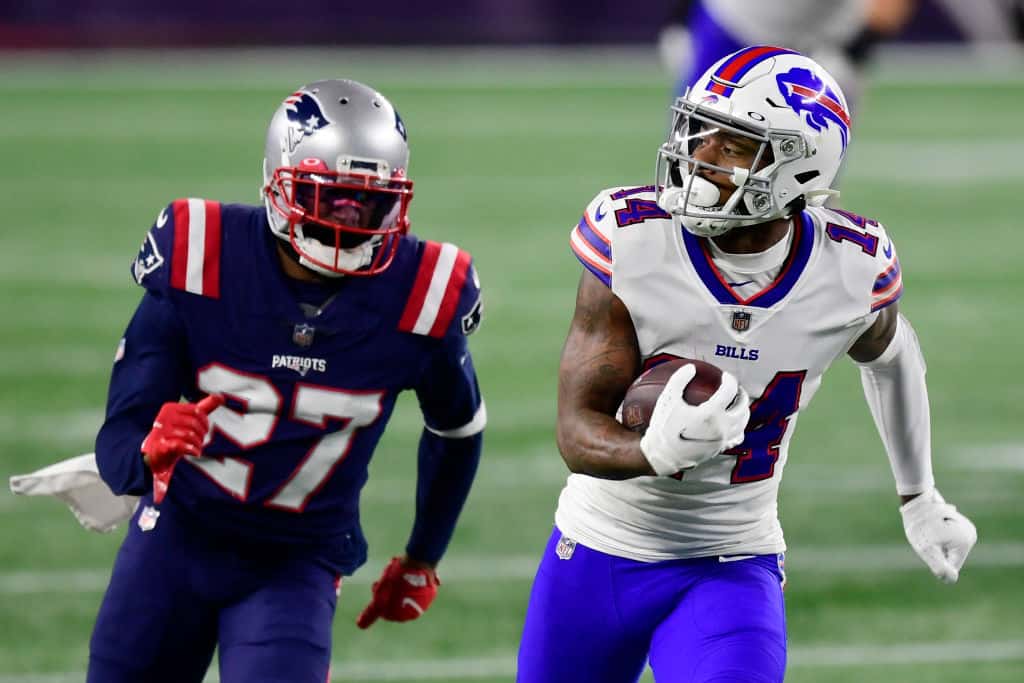 FOXBOROUGH, MASSACHUSETTS - DECEMBER 28: Stefon Diggs #14 of the Buffalo Bills runs the ball into the end zone for a touchdown as J.C. Jackson #27 of the New England Patriots gives chase during the first half at Gillette Stadium on December 28, 2020 in Foxborough, Massachusetts. (Photo by Billie Weiss/Getty Images)

After 256 regular season games, the 2020-2021 NFL Playoffs are finally here. Gaining in popularity in recent years is playoff fantasy football, an easy way to forget about what your other teams did for one final shot at redemption. With the NFL playoffs set to start up on Saturday, here are the Wild Card Weekend fantasy football rankings.

It’s hard to find a QB playing hotter going into the playoffs than Josh Allen. He finished the regular season as the fantasy QB1 and set a franchise single-season record for passing yards with 4,544. His dual-threat ability brings him in on top of the fantasy rankings for the Wild Card round of the 2020-2021 NFL Playoffs.

I talked about this last week, but don’t look now because Lamar Jackson looks like the 2019 version of himself again. Since Week 13, Jackson is the QB2, behind Allen by only 1.34 fantasy points. During this stretch, Jackson is averaging 26.3 points per game, has 12 touchdowns, and has rushed for 430 yards. He gets the best matchup of any QB in the playoffs. Tennessee is 28th against the QB position, giving up 21.33 points per game, and are the 31st-ranked team in total fantasy points allowed at 104.81 per game.

Coming in as the QB3 in the NFL Wild Card fantasy rankings is Ryan Tannehill. Averaging 26.77 points over his last five games, he can break down a defense with his arm on deep passes or inside the red zone using his underrated mobility. While Baltimore is ninth in points to QBs (16.92), it’s hard to look past his body of work.

Tom Brady and Ben Roethlisberger round out the top 5

Tom Brady is back in the playoffs and ended the season strong. He threw for 300 or more yards in his last three games and threw for four touchdowns in each of his past two.

At number five in the NFL Wild Card fantasy rankings is Ben Roethlisberger. Roethlisberger did not look like himself at the end of the season when the Steelers lost three-straight. However, the Steelers sat him and multiple other starters in Week 17, giving them their first week off since Week 4 when their schedule was adjusted.

Russell Wilson is surrounded by all the talent in the world but has the most challenging matchup. The Rams give up the fewest points to QBs (13.52), and the last two times these teams played, Wilson had 12 points (Week 10) and 20 points (Week 16).

Drew Brees has struggled of late, but he could have a full complement of weapons on Sunday. There is optimism coming from the Saints that Michael Thomas could make his return from the IR. Additionally, Alvin Kamara has a shot to come back as well so long as he can test negative leading up to the game.

Which version of these players will show up?

Since Week 13, Baker Mayfield is the QB7 in fantasy. I know, it surprised me too. He has averaged 19.3 points per game in that stretch. However, he faces a Steelers defense that he has faced twice already. In those games, Mayfield was the QB25 and the QB21.

I know Seattle ended the season giving up the second-most passing yards in the NFL, but they have been solid in recent weeks. In their last five games, they are allowing only 207.8 passing yards per game. According to head coach Sean McVay, he is not sure if Goff will be available. Maybe it is gamesmanship to make Seattle prepare for two QBs? As of right now, we don’t know the answer.

Derrick Henry became the eighth player in NFL history to rush for over 2,000 yards, joining former Titan Chris “CJ2K” Johnson in the process. I don’t have much else to add.

Speaking of breakout rookie RBs, J.K. Dobbins’s is on the rise after taking over this backfield. Dobbins is coming off a 160 yard and two-touchdown performance in Week 17 and gets a great matchup this week. He faces the Titans, the 26th-ranked defense in points to the position at (25.7), allows an average of 100 yards rushing per game, and 4.57 yards per carry to open up the Wild Card round. I don’t see how Tennessee can contain both him and Jackson.

Yes, Pittsburgh has a solid defense, but due to injuries, this is not the same defense we saw lead the league earlier in the season. They are vulnerable to long runs, and Nick Chubb has the power and speed to break a long one at any time. He just did it to them last week.

If we knew he was playing, Alvin Kamara could be higher on my rankings list of fantasy RBs for the NFL playoffs. He is a PPR monster, and with Brees under center, we know he can see up to 10 targets in a game. Availability is my only concern.

The matchup is not great against the Saints, who are number one against the running back in fantasy, allowing 17.84 points per game. However, since the bye week in Week 11, David Montgomery hasn’t finished worse than RB8 in PPR and has scored eight touchdowns.

Cam Akers played in a must-win game but was not at full strength. Still, he managed to squeeze 34 yards out of 21 rushes. He caught all four of his targets for a team-high 52 receiving yards. Assuming Akers avoided any setbacks, he should finish in the upper half of the RB fantasy rankings for the NFL’s Wild Card round.

Carson’s appeared to be on a snap count as he played on just 44% of the snaps Sunday. Still, he totaled 83 yards against the 49ers but could not find the end zone for the third consecutive week. The Rams give up the fourth-fewest points to RBs (19.96), and this could be more of a committee approach than we would like.

A surprise RB leads the league in targets for 2020

Passing volume is the value J.D. Mckissic brings. Coming into Week 17, McKissic was the RB5 in PPR. His 110 targets lead all running backs, and the passing game is the one way to move the ball against Tampa Bay. Of the 20.21 points to RBs allowed per game (seventh-fewest), 57.5% come from the air.

Making his return after missing two games on the NFL’s reserve list, Ronald Jones posted 12 carries for 78 yards and a score in Sunday’s win. Despite missing a few games and in a committee, Jones finished just 22 yards shy of 1,000 on the season. The downside is the lack of passing usage, which limits his ceiling.

Continue for our wide receiver and tight end rankings for Wild Card Weekend.