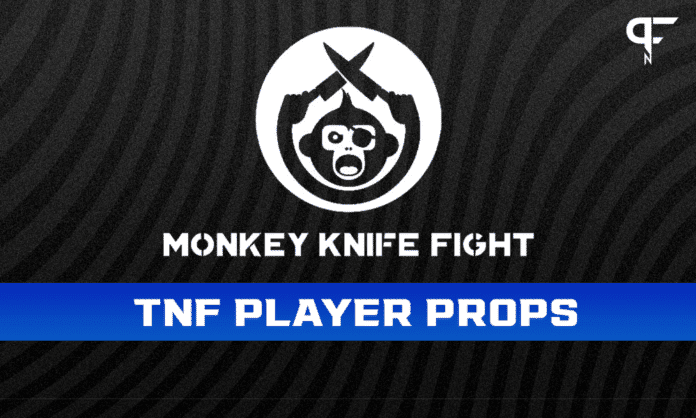 With Monkey Knife Fight promo code of PFN for a 100% instant match, what NFL player props should be your Week 1 Thursday Night football picks?

Picking player props is becoming more and more popular for NFL fans, and Monkey Knife Fight takes that one step further. Their innovative format allows you to get creative selecting NFL player props, as we will examine the Week 1 Thursday Night Football game between the Dallas Cowboys and Tampa Bay Buccaneers.

With the NFL back and better than ever in 2021, which Monkey Knife Fight contests should players target for Thursday Night Football?

In this contest, we have a battle of two of the best QBs in football. Both Brady and Prescott can light up the scoreboard when given a chance. All you need to do is decide whether each player will have more or less than the current prop that Monkey Knife Fight has set. Should you choose both correctly, there is a 3.6x prize on your buy-in.

Starting with Brady, the Buccaneers have arguably the best wide receiver room in the NFL with Mike Evans, Chris Godwin, and Antonio Brown. From Week 9 on (once Brown joined), Brady averaged 37.8 attempts, 305.5 yards, and 2.5 TDs per game. The matchup is also fantastic. The Cowboys’ defense struggled last season, ranking 22nd in yards per attempt and T-27th in touchdowns allowed despite facing the second-fewest attempts (510). But will the Buccaneers need a massive performance out of Brady this week?

Prescott is as talented as they come at the QB position. Throw in having Amari Cooper and CeeDee Lamb as targets, and the game gets even easier. We saw what Prescott could do as he was on pace to break virtually every record in the NFL. Through Week 4, he was averaging 422.5 yards on 50.3 attempts per game. But we also know what happened shortly after. And in Week 1, he faces a brutal challenge against a vaunted Tampa Bay defense. That’s not ideal for a QB who has not taken a live snap in 333 days.

I am taking the Less on Brady and Prescott for this More or Less contest on Monkey Knife Fight. While I think Brady will find success early on, I don’t believe they will need him to be in playoff mode out of the gates. As for Prescott, I know he got his reps in and has been given a clean bill of health, but there is no substitution for the real deal. He could be in for a rough night when you add the matchups on the perimeter along with facing likely the best DL in the NFL without your best offensive lineman.

If you want a simple contest to enter when you redeem your Monkey Knife Fight promo code PFN, this is the one for you. If you can identify three players (minimum one from each team) who can combine for 3 or more touchdowns, you have a chance to win money. You will not find a much simpler process for NFL player prop picks for Thursday Night Football in Week 1.

For this contest, who will be the focus once teams are in the red zone? For the Buccaneers, the first player we look at is Mike Evans. While Godwin and Brown are also heavily used, Brady routinely tries to find his big-bodied receiver once in the red zone. Last season, Evans ranked fourth amongst WRs in red-zone targets (19) and saw the second-highest inside the 10-yard line (14). Of his 13 touchdowns in 2020, 9 TDs came inside the red zone.

What are other players should I include on my TD Dance ticket?

Sticking with the Buccaneers, take a look at Ronald Jones. While Leonard Fournette transformed into Playoff Lenny during the Bucs’ Super Bowl run, this is Jones’ backfield still. Jones ranked in the top 15 in attempts from inside the 10-yard line (21), with 10 coming inside the 5-yard line. Fournette has just 11 carries combined in the RZ. Given the high game total and the Buccaneers’ likelihood of pulling ahead early, I like Jones to find the end zone in Week 1 on Thursday Night Football.

As for the Cowboys, since you must pick at least one player from each team, target a wide receiver. For as talented as Ezekiel Elliott is, I do not want to mess with that defensive line. If I am taking a shot on a Cowboys WR to score a TD, I am following the hype on CeeDee Lamb. Lamb’s contested-catch ability, body control, attacking at the high point, and setting up defenders is about as good as it gets. One of my bold claims was that Lamb has top-five upside in 2021, and that starts in Week 1 with a touchdown.

For my Touchdown Dance contest on Monkey Knife Fight, I am selecting Evans, Jones, and Lamb to score and setting my goal at 2.5 TDs, giving a prize of 4x my buy-in.

Based on your level of confidence in this Thursday Night Football player prop, you can choose different goals with corresponding prizes.

In this Rapid Fire contest on Monkey Knife Fight, rather than yardage, we are falling back to our comfort zone and using fantasy football points as the determining factor.

In the first matchup, Brady and Prescott square off again, and personally, I am surprised that Brady is getting points. Outside of some serious garbage time for the Cowboys, I see Brady easily coming out on top heads-up, let alone with the additional boost.

As for Elliott and Godwin, this is more interesting. I’m not sure where this notion that Elliott is overrated has come from — all he does is put up points. However, that will start next week. Last season, the Buccaneers ranked No. 7 in fantasy points allowed to RBs at just 20.1 per game. They were No. 1 in rushing yards (58.2), yards per attempt (3.3), and No. 2 in total yards (100.1). Dallas faces serious OL questions with Zack Martin out (COVID), Connor Williams just being reinstated from it, and La’el Collins having battled neck stingers since the beginning of last month.

On the other hand, Godwin gave us a scare when he popped up on the injury report on Tuesday [September 7]. However, all signs indicate a minor scare as he was a full participant on Wednesday. This week, Godwin has one of the best matchups around the NFL, especially on TNF with CB Jourdan Lewis. In his four seasons out of Michigan, Lewis has allowed nearly 70% of his passes to be completed and averaged 11.1 yards allowed per reception. With Monkey Knife Fight using full-PPR scoring, Godwin could have an explosive game in Week 1 against a soft matchup.