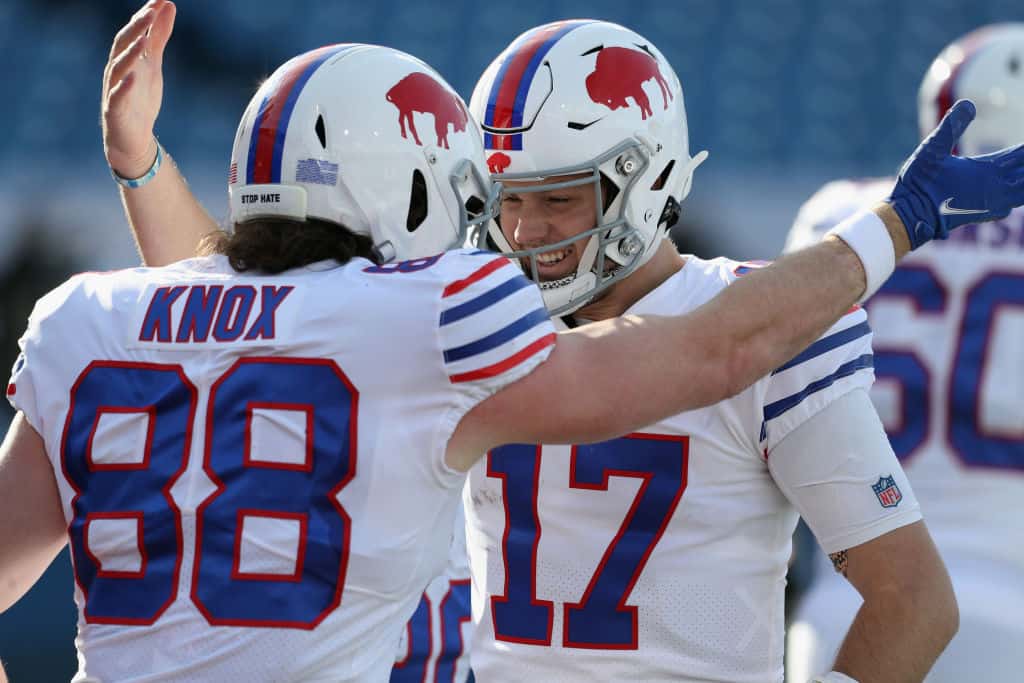 ORCHARD PARK, NEW YORK - NOVEMBER 29: Dawson Knox #88 and Josh Allen #17 of the Buffalo Bills celebrate their first quarter touchdown against the Los Angeles Chargers at Bills Stadium on November 29, 2020 in Orchard Park, New York. (Photo by Bryan M. Bennett/Getty Images)
What's in this article? Click to show
Which Conference Championship Rapid Fire player props could be valuable this weekend?
Which NFL players should I target in the Week 17 Fantasy Challenge?
What are some NFL player prop options in the Conference Championship Touchdown Dance contests?
Want more NFL news and analysis?

Picking NFL player props are becoming more and more popular for fantasy football fans. Monkey Knife Fight takes that one step further. Their innovative format allows you to get creative selecting NFL player props, as we will examine in our Conference Championship Round selections. If you have never played on Monkey Knife Fight, then be sure to check out their site using our promo code PFN and get a 100% instant match bonus up to $50.

Which Conference Championship Rapid Fire player props could be valuable this weekend?

As the competition gets better, these NFL player prop picks will be harder and harder to nail down. However, that doesn’t mean there are not any potentially profitable Rapid Fire contests for the Conference Championship Round of the playoffs.

Two of the best quarterbacks of the millennium square off

The slate’s first game has the Tampa Bay Buccaneers heading up to Lambeau Field to take on the top-seeded Green Bay Packers.

In the Rapid Fire Contest on Monkey Knife Fight, we find an interesting matchup. In this format, we need to pick one player from each of the head-to-head matchups. The first pairing focuses on the final two quarterbacks remaining in the NFC — Tom Brady and Aaron Rodgers.

Aaron Rodgers is putting on a clinic, and he did it again against the best defense in the NFL last week. Rodgers went 23 of 36 for 296 yards and 2 touchdowns and added a rushing touchdown in Saturday’s win over the Rams. He led the Packers to an early lead and never looked back. Tampa Bay has been attackable through the air, allowing 268.31 yards per game. Rodgers is playing as well as he ever has. As a result, he will likely win the NFL MVP award.

Tom Brady did what he needed to do in last week’s win, going 18 of 33 for 199 yards and 2 touchdowns, including a one-yard rushing score.

While New Orleans had a good defense, Green Bay’s defense has been even better. They are fifth in points allowed to QBs (16.1) and give up an average of only 204.8 passing yards per game. Antonio Brown is out for Sunday’s game, and the combo of Jaire Alexander and Kevin King will be difficult matchups.

Monkey Knife Fight is spotting Brady +0.5 yards, so it’s a head-to-head, basically. Aaron Rodgers will be the first of these two NFL player prop picks.

Which running back is the better choice?

Things get a bit more interesting when looking at the running backs, especially given Buccaneers’ DL Vita Vea’s return. We don’t know how much he will play, but we know its impact on the field.

Before suffering his injury in Week 5, Vea had 10 tackles, 3 tackles for loss, 2.0 sacks, and 3 quarterback hits. According to NFL Next Gen Stats, the Buccaneers allowed an average of 2.7 yards per carry with Vea on the field in 2020 and 3.9 with him off the field. The Buccaneers’ pass rush had a 33.9% pressure rate when Vea was in the game, but it dropped to 26.6% without him.

In this matchup, Monkey Knife Fight is giving Leonard Fournette a +10.5 rushing yard advantage. I believe this gets counteracted by splitting carries with Ronald Jones. Fournette saw the majority of RB touches last week (22-13), but in carries, he only had one more rush than Jones.

Given this is rushing yards alone, Aaron Jones takes this side for me as well. He is as efficient as they come and can break a big rush at any time. He will need to be on his game as the Buccaneers allowed only 137 rushing yards to RBs in their first two playoff games.

To hit our goal in this NFL prop pick, both Aaron Rodgers and Aaron Jones need to finish with more yards than Tom Brady and Leonard Fournette. If this happens, we will receive a 3x prize. This Rapid Fire prop on Monkey Knife Fight is one of the more interesting NFL player props for the Conference Championship Round weekend.

Which NFL players should I target in the Week 17 Fantasy Challenge?

For those of us who play fantasy football, this might be the most fun. It’s what we know and love. It’s one of the reasons I was so excited to use the Monkey Knife Fight PFN promo code to get started with a few more dollars in the account than I otherwise would.

Knowing that Patrick Mahomes will be playing this week gives me the confidence to play Chiefs players.

For Kansas City, it’s the usual suspects finding their way into my Monkey Knife Fight picks

Tyreek Hill and Travis Kelce will be in every NFL player prop for me nine times out of 10.

Hill came in off two weeks rest and played like, well, Tyreek Hill. He caught 8 of 10 targets for 110 yards against the Browns. He has seen 7 targets in seven of his last 10 games and had the second 100-yard playoff game of his career.

As I said, the best is Travis Kelce. No one can touch what he can do on the field. Going against the 30th-ranked defense against the tight end, Kelce had 8 receptions for 109 yards and a touchdown.

The Bills are just as bad against the position. In the regular season, they were the 28th-ranked defense against TEs, allowing 14.83 points per game. When these teams played back in Week 6, Kelce had 5 receptions for 65 yards and 2 touchdowns.

Bills players that could help your chances

As for Buffalo, it’s Stefon Diggs. Last week, Diggs had 8 receptions for 106 yards and a touchdown in their Divisional Round win. The connection between Diggs and Allen has been incredible to watch this year. In his two playoff games, Diggs has 14 receptions for 234 yards and 2 touchdowns.

For this NFL Conference Championship Round prop pick on Monkey Knife Fight, I believe the combination of picks between Tyreek Hill, Travis Kelce, and Stefon Diggs should clear the 71.5 PPR points we need for the 2x prize. Only play this contest after using Monkey Knife Fight promo code PFN, however. It could make for quite a profitable week!

What are some NFL player prop options in the Conference Championship Touchdown Dance contests?

If you want a simple contest to enter when you redeem your Monkey Knife Fight promo code PFN, then this is the one for you. If you can identify three players who can combine for three or more touchdowns, you have a chance to win money. You will not find a much simpler process for NFL Conference Championship Round player prop picks.

For this contest on Monkey Knife Fight, I always went for the Star Shootout category. Doing that allowed us to pick players from multiple games in their window. That isn’t an option this week, however. Despite that, we still believe this is the best place to make considerable returns from the contests we discussed.

If all three of your picks score a touchdown, you also win a share of the $5,000 Touchdown Dance prize because each player scored.

Follow the hot players in the AFC Championship Game

For the Touchdown Dance, I am taking the same philosophy I used in the Fantasy Challenge. For those players to hit the 71.5, they will need to score. It’s hard to find guys better at finding the end zone than Tyreek Hill, Travis Kelce, and Stefon Diggs.

We need this group of three players to have more than 2.5 touchdowns for a 2x prize on these Conference Championship Round NFL player prop picks. If they can manage four scores, we are rolling in rewards thanks to a 4x return.

What about in the NFC?

If you want to take an NFC approach to this contest, then you have another great pairing.

The first picks would be Davante Adams and Aaron Jones. Adams just made Jalen Ramsey look silly, and there isn’t a person on this planet who can cover him. Aaron Jones is another great pick for the Packers due to his rushing and passing game usage.

For Tampa Bay, I would look towards Chris Godwin. I expect to see Alexander covering Mike Evans as neither sees much time in the slot. With Brown out, Godwin would see more work inside on the tight, short throws Brady is known for in his career. Godwin lined up there over 75% of the time, and given the potential for the weather, would be his favorite target.