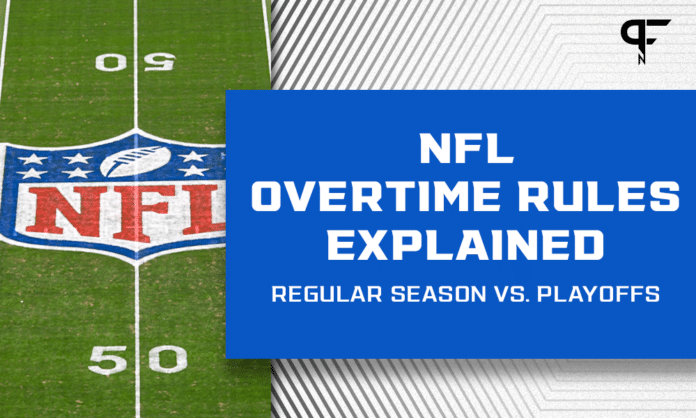 The NFL overtime rules are easy to get a grasp of. We'll provide all the details & break them down, comparing the regular season to playoffs.

By Cody Roark
September 9, 2021
What's in this article? Click to show
NFL overtime rules for regular-season games
How does overtime end in the NFL?
OT Playoff Rules
What are the overtime rules in the NFL preseason?

The NFL on-field product is very complex and competitive when teams face each other on Sundays. Sometimes, they are competitive to the point where a winner cannot be determined after four quarters of action. When NFL teams transition to overtime, how do the rules of the game change with extra quarters in the regular season and postseason?

When overtime occurs in the regular season, the NFL has a guideline of rules that outline how teams will proceed in the extra quarter of action. Upon the end of regulation, the game will go into overtime when the score is tied between two teams.

When overtime occurs, the rules state that both teams will have players present at midfield for a coin-toss to determine who gets the ball first. The visiting team’s captain will get the choice between heads or tails.

Many NFL teams’ strategies change in overtime in comparison to the start of a game. It’s common to see the team that wins the coin toss elect to defer until the second half. But in the extra period, teams will elect to receive the ball first.

How does overtime end in the NFL?

During normal regulation, quarters are 15 minutes, but the NFL overtime rules state that there are only 10 minutes to determine a winner. The NFL rules explain, “each team must possess, or have the opportunity to possess, the ball. The exception: if the team that gets the ball first and scores a touchdown on the opening possession.”

If the team that receives the ball first scores a touchdown on their opening drive, the game automatically ends, and the scoring team wins. If a touchdown is scored, no point after try will be attempted, and the game ends.

However, if the team that receives the ball first drives down the field and kicks a field goal, the other team will receive possession on the ensuing kickoff and will have a chance to win by scoring a touchdown or extend overtime by kicking a field goal to tie the game within the 10-minute quarter. If the score between both teams remains tied at the end of overtime, the game concludes in a tie.

The scoring stipulations change when teams go to overtime, but the rules and resources for coaches and officials change too. Each team is granted only two timeouts, and there are no coach’s challenges allowed in overtime. The replay official conducts each review of any play.

If more than one overtime period occurs, the captain who lost the first overtime coin toss will get to choose to possess the ball or select which goal his team will defend, unless the team that won the coin toss initially deferred to that choice.

During the postseason, teams will have three timeouts instead of two because the contest is treated as a normal game. There is a two-minute intermission between each overtime period, but there is no halftime after the second period of overtime.

Another coin toss will occur if a playoff overtime contest does not have a defined winner at the end of a fourth overtime period. The game will continue to be played until a winner is determined.

The recent history of NFL overtime rules has not been without controversy. Much has been made of both teams not having the opportunity to get the ball if the first team scores a touchdown.

This was highlighted during the AFC Championship game in January 2019. Having scored 24 points in the fourth quarter to come back from 17-7 down, the Kansas City Chiefs did not get the opportunity to touch the ball in overtime. Instead, New England scored a touchdown on their first drive and went on to the Super Bowl.

Alternative options have been proposed for playoff overtime, but none have been accepted to replace the current rules.

What are the overtime rules in the NFL preseason?

The NFL recently changed its overtime rules for preseason. Previously, any game ending in a tie would go into a mandatory overtime period. However, during the 2021 NFL offseason this was adjusted to prevent players from facing unnecessary time on the field during the preseason.

Instead, there is now no overtime in the preseason, with games ending as a tie. This decision was made with player welfare in mind. With the results from preseason having no impact on the playoffs, there is no need to play to a result. It is unlikely we see this change any time in the future.