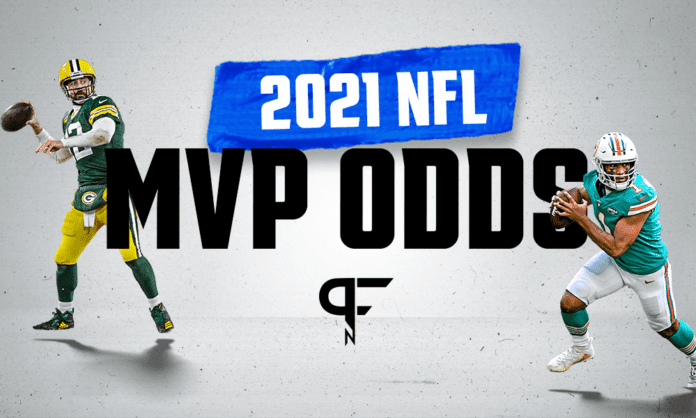 NFL MVP Odds Tracker: Who wins Most Valuable Player in 2021?

Ahead of the 2021 NFL season, how do the current MVP odds shape up, and which longshots could be interesting value this season?

Heading into the 2021 NFL season, the MVP odds are drawing some focus as fans around the league start looking ahead. After Aaron Rodgers took home his third MVP award in 2020, which players top the NFL odds in 2021, and who are some under-the-radar players that might be worth considering this season?

Which odds offer potential value in 2021?

The past decade of NFL MVPs has provided a mix of winners from up and down the preseason odds. Aaron Rodgers and Tom Brady were both highly valued entering the season, but Lamar Jackson, Patrick Mahomes, and Matt Ryan were all at longer odds entering the season. Therefore, identifying the value can be extremely tough. Let’s take a look at a couple of the early names with longer odds who could be in contention.

The name of Burrow immediately screams out when looking at the NFL MVP odds. The young QB was impressing as a rookie before a knee injury ended his season. Now he is reunited with his former LSU teammate in Ja’Marr Chase, who will add yet another dynamic to an offense that looked primed to break out in 2020.

Additionally, with the Bengals expected to struggle again in 2021, they could be chasing a lot of games. That plays into the hands of Burrow, who could rack up huge stats. The problem there is the MVPs in recent seasons have all come from successful teams. If the Bengals struggle to get to 8-9/9-8, it will be tough for Burrow to get the MVP award. Rather than MVP, it might be worth checking out Burrow’s odds to be named NFL Offensive Player of the Year.

Hurts is another player that fits the breakout mantra. After just a handful of starts to end 2020, he will start the season for the Eagles. Hurts has a fascinating mix of being able to beat teams with his arms and legs. That was the recipe that gave Jackson the MVP in Year 2. Hurts is not as electric with his legs as Jackson, and he will likely have the same problem as Burrow in terms of being on a non-competing team.

Another QB set to start the season for the first time is Tua Tagovailoa. While he did not light the league on fire as a rookie, Tua was solid, and he was returning from a really tough hip injury. Now fully healthy, with two new explosive weapons in Will Fuller and Jaylen Waddle, Tua could take a big step in 2021.

The advantage Tua has over Burrow and Hurts is that he appears to be on a contending team. The Dolphins won 10 games last season with Tua not at his best. If he comes out playing well in 2021, the Dolphins could be a 12 or even 13-win team.

Two games into the 2020 season and Newton was firmly in the NFL MVP race. After he struggled the remainder of the year, he is now not even in the competition. However, at +10000, the former MVP has to be worth consideration. Regardless of what you think of the receiving talent they added, the Patriots put more playmakers around Newton. If he beats out Mac Jones in camp, Newton could be primed for a stellar 2021 campaign.