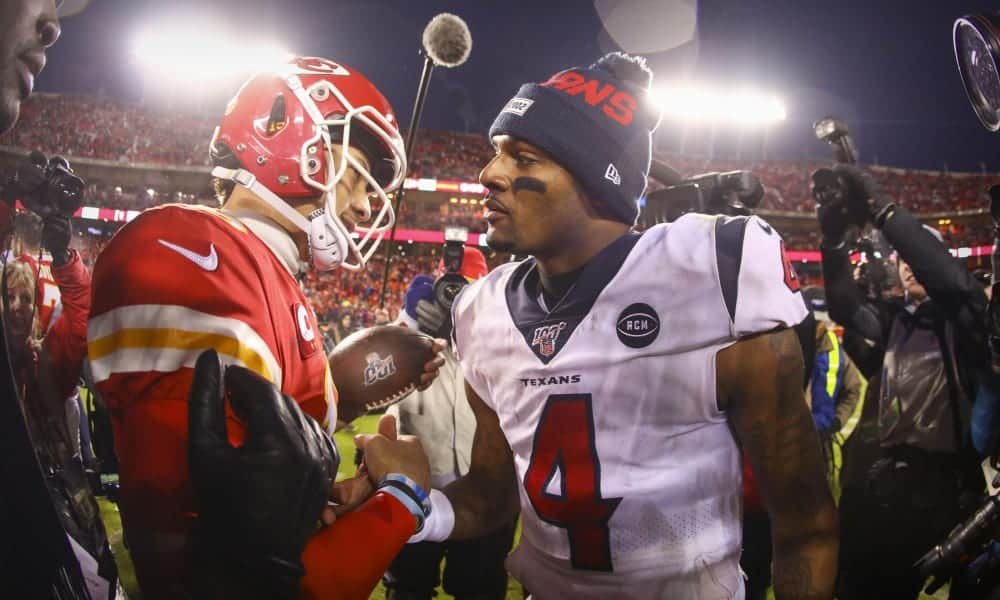 It’s a tradition that is going on almost 20 years in the National Football League and one where if you are the host team, you’re in great company.

Fans across the world for nearly two decades now have counted the days between the Super Bowl in February and the start of the following regular season in September. It’s one of the longest waits for sports fans, one that is typically only rivaled on a yearly basis by college basketball but certainly trumped by those who only watch soccer during the World Cup every four years.

But once that first Thursday after Labor Day rolls around, football fans everywhere celebrate in unison as dreams of a Super Bowl run for 32 teams begin anew.

It’s a tradition that began back in 2002. The game was actually created as a way to help revive the economies of the New York City and Washington, D.C. areas in the wake of the September 11th attacks. As such, the first two kickoff games were held in those areas, with the New York Giants hosting the San Francisco 49ers in 2002 and the Washington Redskins taking on the New York Jets in 2003.

ESPN aired the first Thursday Night Kickoff game, a 16-13 49ers victory over the Giants. ABC took over the broadcast responsibilities in 2003, also a 16-13 decision in favor of the Redskins over the Jets.

The popularity of the Kickoff Game was so high that, in 2004, the NFL decided to make it a mainstay of the NFL schedule. They also made it so that the defending Super Bowl champions would host the season-opening game, meaning the New England Patriots, winners of Super Bowl XXXVIII over the Carolina Panthers, earned the right to celebrate their second Super Bowl title on opening night in a rematch of the previous year’s AFC Championship Game against the Indianapolis Colts. Like the previous season, Tom Brady and the Patriots once again got the better of Peyton Manning and the Colts, 27-24.

2005 saw the last time ABC would carry the season opener as the eventual new TV contracts would see ESPN take over Monday Night Football and NBC get the Sunday Night Football package. That game also saw the Patriots as the host team after winning Super Bowl XXXIX over the Philadelphia Eagles. Once again, Brady and company began the season 1-0 with a 30-20 decision over the Oakland Raiders.

The first Kickoff Game on NBC came in 2006 and took place at Heinz Field, home of the  Super Bowl XL champion Pittsburgh Steelers. This was also the year Steelers QB Ben Roethlisberger suffered his near-death motorcycle accident and also needed an emergency appendectomy, costing him the opener against the Miami Dolphins. Backup quarterback Charlie Batch stepped in and threw three touchdown passes in a 28-17 victory.

Home teams would continue to dominate the series, including 2007, which saw the most-lopsided victory to date in the season opener, a 41-10 Colts victory over the New Orleans Saints, who would eventually exact revenge on Indianapolis in Super Bowl XLIV.

The 2012 Dallas Cowboys were the first road team to take the season opener since the 2002 49ers. This was also the only time in the Thursday Week 1 tradition that the game was not played on Thursday. The Cowboys and Giants met on a Wednesday as the league did not want to interfere with the last night of the 2012 Democratic National Convention in Charlotte, North Carolina. You may also remember the 2012 season as the “Touchdown Seahawks” season with the replacement referees.

The home team got back to their winning ways in the 2013 season kickoff. The only catch was that the home team was not the reigning Super Bowl champions. John Harbaugh and the Baltimore Ravens won Super Bowl XLVII over his brother Jim Harbaugh and the San Francisco 49ers. The NFL had to shy away from their typical tradition of the reigning champions starting the season at home because it would have created a scheduling conflict with the Baltimore Orioles, who also had a home game that night and the teams share parking facilities.

That did allow the NFL to schedule a rematch of the double-overtime playoff thriller between the Ravens and Denver Broncos. But instead of a night to remember for the Ravens, it was the beginning of an epic offensive run for Peyton Manning and the Broncos. Manning tied an NFL record by throwing seven touchdown passes and the Broncos would go on to post one of the greatest offensive outputs in NFL history after their 49-27 win over the Ravens, a win that helped catapult the Broncos into the AFC’s No. 1 seed and an eventual berth in Super Bowl XLVIII.

Of course, that offense was held to just eight points by one of the greatest defenses we’ve ever seen in the Seattle Seahawks, who had the offensive showing themselves, winning 43-8. They kicked off the 2014 season with a convincing 36-16 over the Packers to begin defense of their title. The two teams met eventually crossed paths again at CenturyLink Field in a dramatic NFC Championship, won in overtime by the Seahawks to send them back to the Super Bowl and they had their eyes set on a repeat and a dynasty.

That is, until Malcolm Butler stepped in front of Russell Wilson’s goal-line pass from the two-year line, giving us the gift of Richard Sherman’s facial reaction and crushing the dreams of Seahawks fans. The Patriots were back on top of the football world for the fourth time in franchise history. They were then slotted into the opening game of the 2015 season against the Pittsburgh Steelers. For the third time, the Patriots hosted the Thursday kickoff and for the third time, the Patriots won the Thursday kickoff, beating Pittsburgh, 28-21.

After the Broncos finally broke through and won Super Bowl 50 over the Carolina Panthers and sent Peyton Manning off into the sunset, the NFL went ahead and scheduled the rematch for the following season’s first game, as the Broncos just so happened to already be scheduled to host the Panthers. In Denver’s first game post-Peyton, Trevor Siemian and the Broncos held off the Panthers, despite two interceptions from Siemian. The Broncos won, 21-20.

One of the biggest stunners among the Thursday night openers came in 2017, when the Kansas City Chiefs, led by Alex Smith before Patrick Mahomes became the star we know and love today, put 42 on the defending champion Patriots, fresh off their fifth Super Bowl title. Smith threw four touchdown passes in the 42-27 decision as the Chiefs would start the season 5-0 but then go through a bit of a roller coaster that year.

Kansas City would lose six of the next seven before winning their final four games to finish 10-6 and win the AFC West, including Mahomes’ debut in Week 17 against the Denver Broncos as the Chiefs were already set for the playoffs.

The City of Brotherly Love will never forget September 6, 2018. That’s the day the Philadelphia Eagles have been waiting for what seemed like forever. They finally got to raise their first Super Bowl banner after “Philly Special” and backup quarterback Nick Foles led the team to a 41-33 win over the Patriots. We even saw Philly Special 2.0 in the season opener against the Atlanta Falcons, whom the Eagles defeated in the Divisional Playoff during their Super Bowl run thanks to a fourth-and-goal stop to secure the victory.

An 18-12 victory, despite offensive struggles and a 6-3 halftime deficit, got the Eagles to a 1-0 start, though it took a run from 6-7 to 9-7 (and a Week 17 loss from the Minnesota Vikings) to claim the NFC’s final playoff spot for the Eagles, where “Double Doink) pushed Philadelphia past the Chicago Bears in the Wild Card round. Unfortunately for the Eagles, their hopes at a repeat almost literally slipped right through Alshon Jeffery’s hands in the Divisional Playoff against the Saints.

The most recent edition of the Thursday kickoff was the first one since 2003 not to feature the defending champions. The Super Bowl LIII champion Patriots were actually given the opening Sunday night slot against the Pittsburgh Steelers, a 33-3 whacking to kick off what became Brady’s final season in Foxborough.

The Thursday night kickoff was actually slotted at Soldier Field in Chicago, pitting the Bears against the Packers. The reason being it was, of course, the NFL’s 100th season and Bears-Packers is the NFL’s longest-running rivalry, dating all the way back to November 27, 1921. 2019 was also the 100th season for the Bears as one of the original founding members of the league when they were known as the Decatur Staleys. The then-Chicago Cardinals (now Arizona Cardinals) are the other.

Offense certainly was not aplenty in this game, as the Packers won, 10-3. That wasn’t exactly how fans wanted to start the season after the lowest-scoring Super Bowl ever, a 13-3 Patriots win over the Los Angeles Rams. But the win did help spring Green Bay on a run that eventually led them to the NFC Championship Game.

The 2020 season is currently scheduled for September 10 and is expected to be played at Arrowhead Stadium, as the Chiefs begin defense of their Super Bowl title. It will be a rematch of the epic AFC Divisional Playoff against the Houston Texans, a game that saw the Texans jump out to a 24-0 lead only to be outscored 51-7 afterward. The Chiefs came away with a 51-31 victory en route to winning Super Bowl LIV.

Needless to say, this is all dependant on the current public health crisis and whether the NFL is going to stick with their original schedule as they are currently planning on doing. It’s certainly a true 50/50 whether the game will be played as scheduled. If it is played, history is on the Chiefs’ side. Home teams are 14-3 in the Kickoff Game, though road teams have won two of the last three such games, including those 2017 Chiefs at Gillette Stadium.