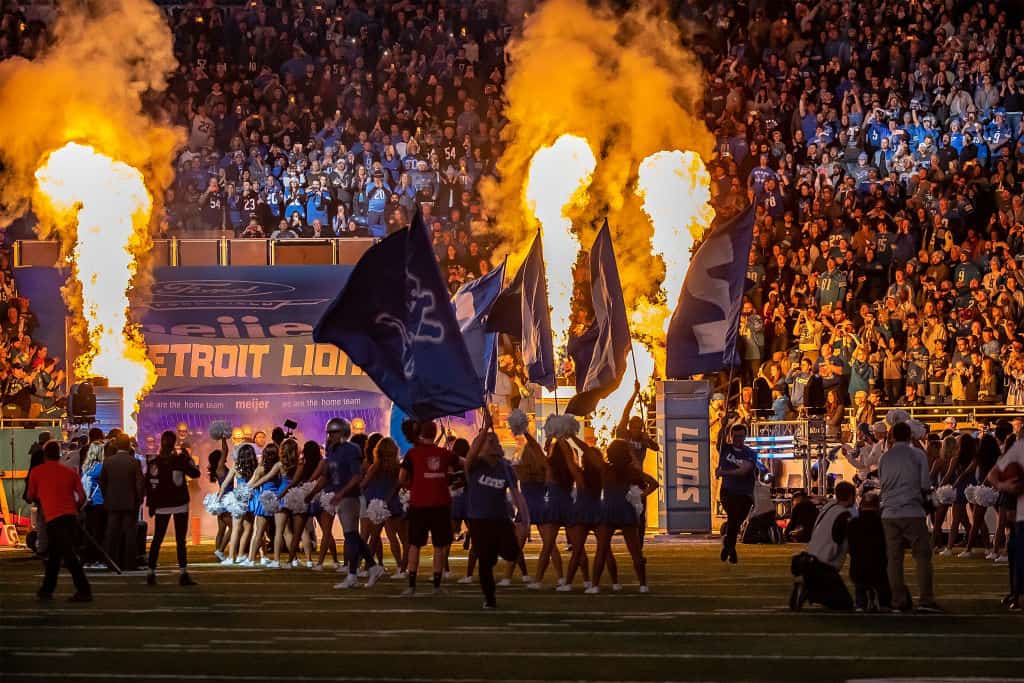 DETROIT, MI - NOVEMBER 22: Detroit Lions fans stand and watch the player introductions prior to an NFL, Thanksgiving Day game against the Chicago Bears at Ford Field on November 22, 2018 in Detroit, Michigan. The Bears defeated the Lions 23-16. (Photo by Dave Reginek/Getty Images)

The NFL games today TV schedule for Week 12 kicks off with the best Thursday of the season: NFL football on Thanksgiving. The Detriot Lions and Dallas Cowboys’ longstanding tradition of playing at home on Thanksgiving continues. For information regarding other Week 11 matchups and postponed NFL contests, refer to the 2020 NFL schedule; it can be sorted by division, team, week, time, and more.

Last week was one to forget for the Detroit Lions after losing to former XFL QB P.J. Walker and getting shutout by the Panthers defense. The coaching seat can only get so hot for Lions head coach Matt Patricia, and with his only win coming against the Washington Football Team in the past four weeks, a loss here would almost certainly put his head coaching career on life support. Can QB Matthew Stafford and the Lions offense take advantage of a Houston defense that has given up a copious amount of points this season?

Related | D’Andre Swift Injury Report: Is he playing on Thanksgiving?

After firing Bill O’Brien before their Week 5 game, there have seemingly been no expectations for the Houston Texans as they await a new regime. However, they still have some guys that can make you pay on offense. QB Deshaun Watson and WR Will Fuller are establishing a great connection this season, which looks promising for the future. The Texans also have Duke Johnson in the backfield, who should have a day against the Lions’ 30th-ranked rushing defense.

The second NFL Game today on Thanksgiving is an NFC East showdown for control of first place. Washington got things back on track last week with a win over the Bengals. Over the past five weeks, Washington has either won decisively, with wins over Dallas and Cincinnati or lost by less than three points. The pieces are coming together, but HC Ron Rivera and company need them to fit quicker, as their shot at the division begins and ends with this game.

Meanwhile, Dallas is in the same boat, but it’s a different story. There was a point in the season where the idea of Dallas winning this division was equivalent to pigs flying. However, things have changed, whether that’s due to their play or the rest of the division’s overall ineptitude.

Getting QB Andy Dalton back on the offense is enormous, as he is arguably one of the better QBs currently available in the division during the regular season. He’s already established a great rapport with rookie WR CeeDee Lamb, highlighted by a marvelous touchdown catch last week against the Vikings.

Dallas couldn’t ask for more from Dak Prescott’s backup. The Cowboys will need their defense to batten down the hatches against Washington’s offense. The winner of this turkey day game takes control of the East, at least until Sunday if the Eagles win.

Unfortunately, the NFL’s 2020 Thanksgiving schedule will be without the titular Thursday Night AFC North showdown due to multiple positive COVID cases for the Baltimore Ravens. The Pittsburgh-Baltimore NFL matchup has been postponed to Sunday afternoon.