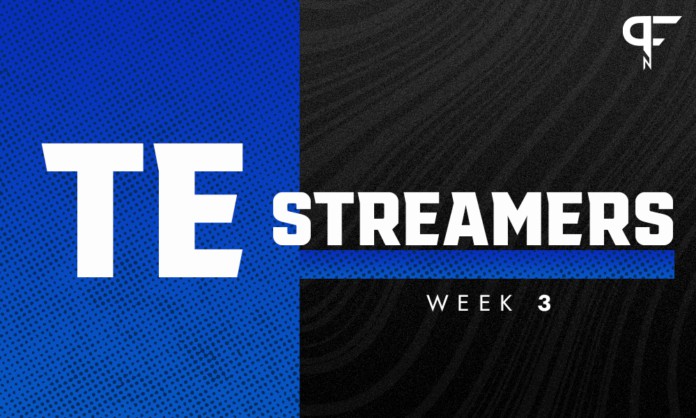 With Week 3 of the NFL season here, let's look at this week's TE rankings and streamers. Who are some under-the-radar options this week?

With Week 3 in the NFL upon us, it’s time for fantasy football managers to set their lineups and dive into each position. At a position with a tendency to lack weekly upside, here are our TE tiers and rankings for Week 3, along with fantasy streamers.

While individual rankings will always be valuable for weekly decisions, using a tier-based approach at TE can help find similar production ranges.

Rather than focusing on the top-tier fantasy football players, we are looking at the TEs who might be going under the radar for Week 3. For this, we are using FleaFlicker and their availability percentage with a cut-off at 60%, meaning these TEs should be available in most fantasy football leagues in Week 3.

Jared Cook caught 3 of 5 targets for 28 yards against the Cowboys last week. This was disappointing considering the 34-year-old tight end caught 5 of 8 targets for 56 yards the week prior.

In Week 3, the Chargers face the Chiefs as 6.5-point underdogs. The total has been set at 55 points for this matchup. The Chiefs’ defense has been susceptible to tight ends. They’ve allowed an average of 12.7 PPR fantasy points per game to the position over the last four regular-season games.

Chargers quarterback Justin Herbert has averaged 40.2 pass attempts in his NFL career. Wide receivers Keenan Allen and Mike Williams and running back Austin Ekeler will continue to command a high number of targets. Nevertheless, in this matchup, Cook has the potential to finish as a TE1.

Robert Tonyan caught all 3 of his targets for 52 yards and a touchdown against the Lions. He’s caught 5 of 7 targets this season and is a favorite red-zone target of quarterback Aaron Rodgers.

The 49ers gave up a monster performance to Lions tight end T.J. Hockenson in Week 1. He caught 8 of 10 targets for 97 yards and a touchdown against them. Tonyan can be viewed as a low-end TE1. The matchup between the Packers and 49ers has an over/under of 49.

Dalton Schultz has caught all 8 of his targets for 63 receiving yards this season. He continues to split targets with fellow Cowboys tight end Blake Jarwin. However, Schultz has played 70% of the offensive snaps as compared to Jarwin’s 53%.

With all of the receiving weapons that the Cowboys have, it will be difficult for the Eagles linebackers to cover Schultz. He’s an excellent streamer as Dallas faces Philadelphia at home on Monday Night Football. The over/under is sitting at 52 points.

Dawson Knox was pumped up as a breakout candidate at the TE position all offseason. He has the athleticism you look for in a tight end, and he’s tethered to one of the most dynamic offenses in the NFL.

Yet, Knox has only caught 6 of 7 targets for 58 yards and a touchdown through two games. He’s played 68% of the Bills’ offensive snaps. Nevertheless, Knox has a favorable matchup against Washington this week. He’s faster and stronger than the linebackers that will be asked to cover him. Therefore, Knox can be viewed as a high-end TE2 with upside against the Football Team.

Cole Kmet finished last week’s matchups against the Bengals with a hideous stat line. He caught his only target for zero yards. However, the Bears only had 24 pass attempts. And the good news is that Kmet is leading all Bears’ tight ends with 7 targets this season. Fellow tight end Jimmy Graham only has 2.

The Bears’ offense will look different in Week 3 against the Browns with rookie Justin Fields under center. His ability to use his athleticism to create something out of nothing benefits Kmet. He’s a solid TE streamer this week.