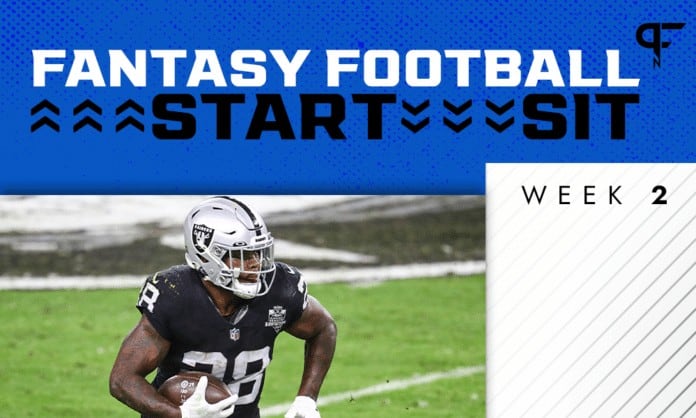 The second NFL Sunday is here, and fantasy lineups are being set. Who makes the list of the top start 'em and sit 'em options for Week 2?

The second NFL Sunday is here, and fantasy football lineups are being set. Who makes the list of the top start ’em or sit ’em options for Week 2?

Which QBs are must-starts, and who should remain on the bench in Week 2?

Bridgewater completed 28/36 for 264 yards and 2 TDs against the Giants in Week 1. The Broncos did lose Jerry Jeudy to a high ankle sprain. However, Bridgewater still has multiple receiving weapons, including wide receiver Courtland Sutton and tight end Noah Fant. Bridgewater and the Broncos have a favorable matchup against the Jaguars this week. Over the last five regular-season games, Jacksonville’s defense has allowed an average of 23 fantasy points. Bridgewater is an excellent streamer this week.

Hopefully, Tannehill’s Week 1 performance with new offensive coordinator Todd Downing isn’t a sign of things to come in the 2021 season. The veteran quarterback went 21/35 for 212 yards, 1 TD, and 1 INT against the Cardinals. Additionally, Tannehill was sacked 6 times and lost 2 fumbles.

Tennessee’s offensive line is much better at run blocking than pass blocking. The Seahawks, like everyone else, witnessed Chandler Jones humiliate the Titans’ OL — Seattle’s defensive front will test this unit. It is worth mentioning that over the last five games, QBs have only averaged 237 passing yards and 15.6 fantasy points against the Seahawks.

These are the RBs you want to start (or sit) this week.

It was reported on Friday that Josh Jacobs is out for Week 2 against the Steelers. This allows Drake to operate as the lead back in Las Vegas’ committee. Drake signed a two-year, $11 million contract with the Raiders in free agency, showing productivity over the last three seasons, totaling 3,266 yards and 27 touchdowns in 45 games. Drake has finished as an RB2 or better in 54% of his games in PPR formats over that period.

Last week, Drake rushed 6 times for 11 yards and caught all 5 of his targets for 59 yards. He faces a Steelers defense that has allowed an average of 16 touches, 79 total yards, and 15 PPR fantasy points to top RB scorers over their last five regular-season games. Raiders head coach Jon Gruden mentioned publicly that Peyton Barber would inherit some of Jacobs’ touches. Nevertheless, Drake is a solid RB2.

Gaskin operated as Miami’s No. 1 back in Week 1. He played 54% of the snaps and had 14 opportunities (rushing attempts plus targets). However, Gaskin only accumulated 50 total yards. Malcolm Brown and Salvon Ahmed are unlikely to usurp Gaskin for the starting role. Still, he has a challenging matchup against the Bills in Week 2. Buffalo’s defense held highly touted rookie Najee Harris to only 6 PPR fantasy points last week.

With the wide receiver position deeper than ever for fantasy football, start ’em or sit ’em decisions for Week 2 are invariably matchup-dependent.

Cooks caught 5 of 7 targets for 132 yards against the Jaguars. Cooks will continue to see many targets as QB Tyrod Taylor’s No. 1 receiver. The matchup against Cleveland’s secondary isn’t as intimidating as many think. Denzel Ward is their most capable cornerback. However, Greg Newsome II and Troy Hill are matchups Cooks should be able to exploit.

Jones’ debut with the Titans was not what fantasy managers envisioned. He caught 3 of 6 targets for 29 yards. On the surface, if you are looking at season-long points allowed numbers, Seattle’s defense looks like a unit you should target. However, the Seahawks played much better down the stretch last season. Over the last five regular-season games, top WR scorers have only averaged 14 PPR fantasy points against them. Jones is more of a WR3 this week.

Although the TE position in fantasy is notoriously shallow, start ’em or sit ’em decisions for Week 2 could mean the difference in a win or a loss.

Fant caught 6 passes on 8 targets (led the team) for 62 yards against the Giants in Week 1. Fant should see additional targets, with receiver Jerry Jeudy expected to miss significant time. Furthermore, Fant has a favorable matchup against the Jaguars. The top TE scorers against Jacksonville’s defense over the last five games have averaged 4.2 targets, 4 receptions, 50.6 receiving yards, and 13.6 PPR fantasy points. Fant can be viewed as a high-end TE1.

Johnson caught 3 of 3 targets for 21 yards and 2 touchdowns against the Packers last week. But Adam Trautman (6) led the Saints in targets. Johnson could end up being extremely touchdown-dependent.

The right D/ST selection could potentially win your fantasy week.

Green Bay’s defense is chomping at the bit to avenge their humiliation from Week 1 by the Saints. The Packers will face the Lions in their home opener. Detroit QB Jared Goff has historically not performed well under pressure. I expect the Packers to consistently test the Lions’ offensive line to throw Goff … off.

It was shocking to watch Russell Wilson eviscerate the Colts’ defense last week. He completed 18/23 passes for 254 yards and 4 TDs. It is in the realm of possibility that Rams quarterback Matthew Stafford finishes with a similar stat line in Week 2. I’d look elsewhere for a starter.