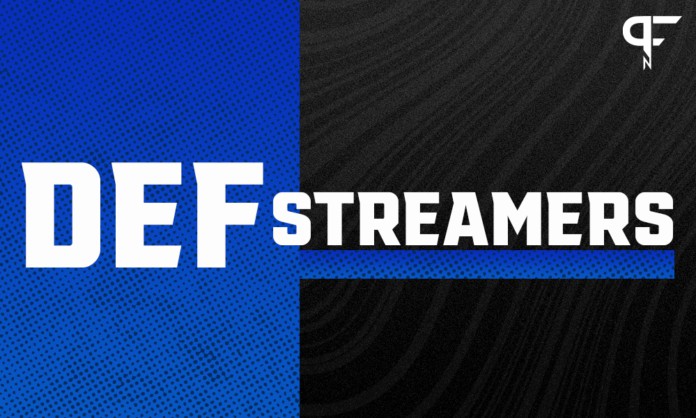 D/ST streamers allow you to make weekly rankings and target specific matchups for the best return -- here are the best choices for Week 3.

Knowing who to target as D/ST streamers in fantasy football is increasingly important to win your matchups. Here’s a look at five D/ST streamers to keep in mind heading into Week 3.

The Raiders stymied the Steelers in a Week 2 victory and now face another intriguing matchup in Week 3.

The addition of Gus Bradley as the Raiders’ new defensive coordinator is paying dividends. Las Vegas is currently 2-0 and ranks 11th in points allowed (22), 12th in sacks (5), and 16th in yards allowed (368.5). The Raiders brought in a ton of talent this offseason and simplified their scheme. They are thriving and have a plus matchup in Week 3.

They face a struggling Dolphins offense at home. Franchise quarterback Tua Tagovailoa is dealing with bruised ribs, and the offense looked dismal with backup Jacoby Brissett at the helm. Las Vegas is an excellent streamer this week.

You may be surprised to see Tennessee being recommended as a streamer. They have allowed 121.4 PPR fantasy points per game this season. This is eerily similar to the 111.7 they conceded last year. However, Tennessee’s defense really stepped up in the second half against the Seahawks last week, sacking Russell Wilson 3 times and holding Seattle to only 6 points en route to the win.

Now, the Titans play the Colts in Week 3. They will face either Carson Wentz — with limited mobility due to two sprained ankles — or backup Jacob Eason. Fire the Titans up as a streamer if you are in a pinch.

Which NFC D/ST options should you target for Week 3?

A lot of the talk surrounding the Saints so far this season has been about quarterback Jameis Winston and the rest of the offense. New Orleans’ offensive struggles could also have a negative impact on the defense, as we saw last week against the Panthers. Nevertheless, this is still the same defense that shut down Green Bay’s explosive offense in Week 1.

The Patriots seem to want to rely on their running game and defense. This places rookie Mac Jones in more of a game-manager role. Additionally, he doesn’t have an abundance of receiving weapons in New England. This is a matchup in which the Saints could surprise us. New Orleans is in a good spot for a bounce-back performance.

The Giants’ defense allowed Washington quarterback Taylor Heinicke to complete 34 of 46 passes for 336 yards, 2 touchdowns, and an interception in Week 2. Nonetheless, New York’s defense should have more success against a struggling Falcons offense. Atlanta ranks 25th in total yards (304) and 30th in points scored (15.5). The Giants’ secondary could come up big in this matchup. Meanwhile, Falcons quarterback Matt Ryan threw 3 interceptions last week against the Buccaneers and could struggle again this week against the Giants on the road.