With the NFL Coverage Map from 506Sports, you can find out where, how, and when to watch the different NFL games in Week 12.

The NFL coverage map is here for Week 12 games, and so is the turkey. With the NFL Thanksgiving games, it’s a bit of a different schedule with no bye weeks and the Thursday night contest being on NBC instead of Amazon Prime.

The folks at 506 Sports provide this week’s NFL TV and coverage map. The color codes and what games they correspond to are listed below.

Listings include FOX, CBS, NFL Network, and prime-time games on NBC and ESPN. These maps are subject to change throughout the week. For the Thanksgiving Slate, scroll to the bottom fo the article for more information. 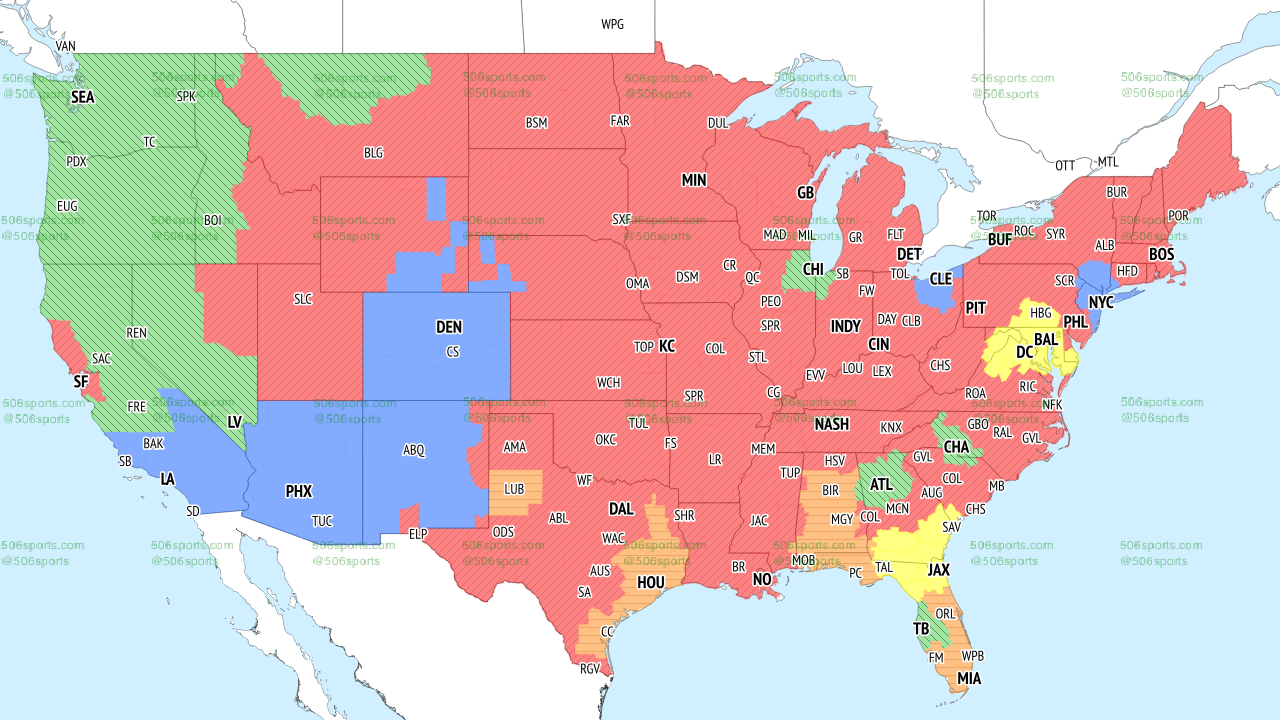 In the NFL playoffs last year, the Bengals eliminated the Titans. Now, the Titans have a comfortable lead in the AFC South, but the Bengals are on the brink of a Wild Card berth. You know Tennessee is thinking revenge, and much of us across the coverage map will have an opportunity to tune in in Week 12.

The Texans own an 8-2 record against the Dolphins since joining the league in 2002. However, history means little when the talent level is so far apart from each other, and the Dolphins are strides better right now. The Barstool Sportsbook has Miami as a 12-point favorite as of Wednesday morning.

The Ravens may have the AFC North lead, but if they keep playing down to their competitors, they’re surely going to get bit once or twice more in 2022. In Week 12, it’s the Jaguars licking their chops for an opportunity to keep their season alive.

Two frustrating head coaches and teams playing below expectations. At the same time, two incredibly talented teams. The only difference is one is still playing for their head coach’s job, and they’re on the road in the late CBS window in Arizona this week.

The Seahawks went into their bye week with the NFC West lead, only to return with themselves as the seventh-seed in the NFL playoff picture. While the Raiders aren’t exactly a threat to anyone right now, it only takes one slip-up to find yourself completely out of the hunt. 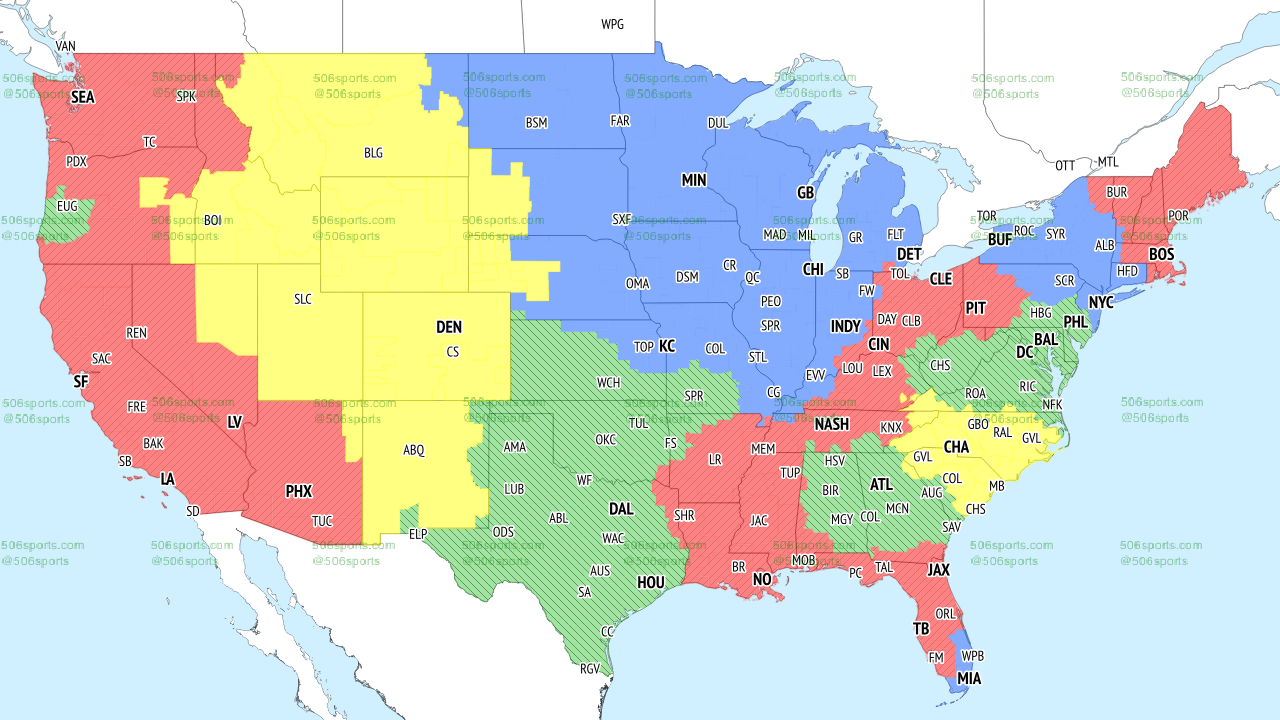 Currently, there’s not a team with a worse record in the playoff race than the Buccaneers. However, they’re on a two-game win streak, and they’re going up against a Browns team that’s one game away from getting Deshaun Watson back from suspension.

Zach Wilson has been benched, so we’ll see someone else under center for the Jets. If Justin Fields’ injury keeps him out of action, this may be the most unappealing game in the early-Sunday window in Week 12.

Let me correct myself — this is the most unappealing game. Eat your leftover turkey and take a nap if you see yellow on the TV map above in your area.

If either team currently in the hunt for the NFC playoff picture is going to sneak themselves in, it’s likely going to be the Falcons or Commanders. If the Falcons lose, they’ll be two games out of a berth with just six weeks remaining. 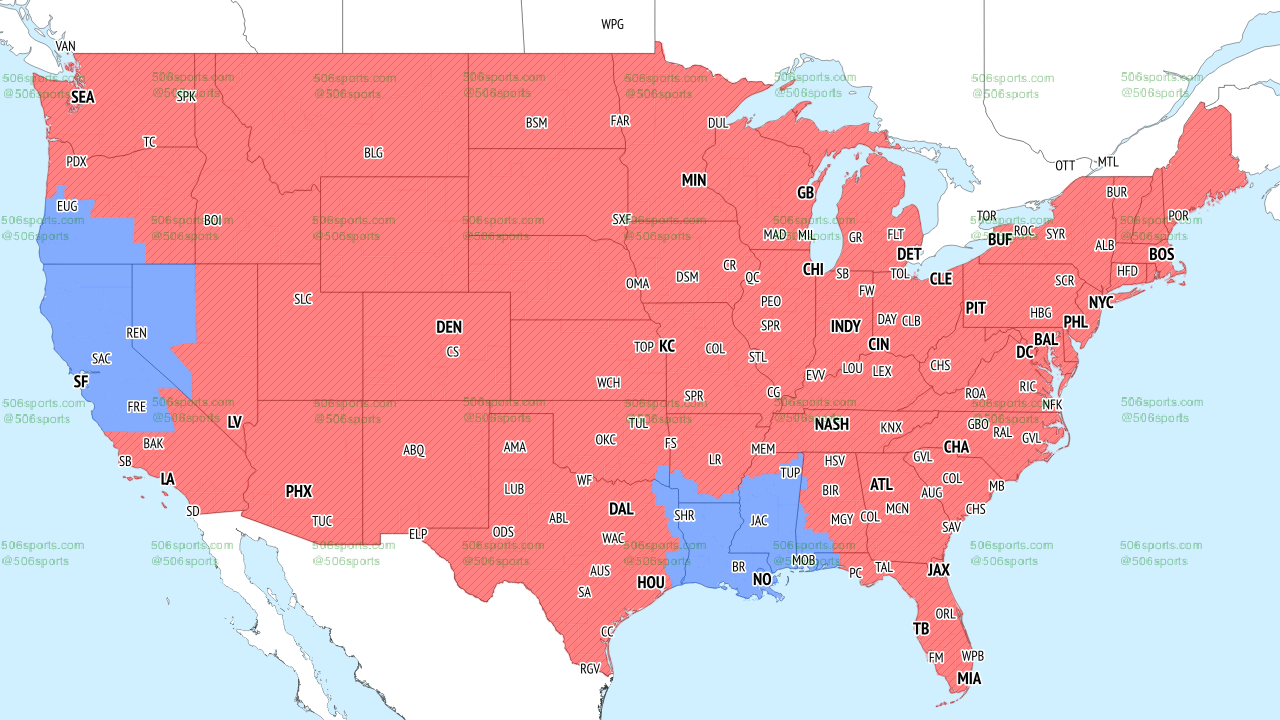 At 3-7, the Rams are nearly bringing up the rear in the NFC. At 8-2, the Chiefs have proven themselves to be the top team in the AFC. Surely FOX was hoping for a more competitive squad out of Los Angeles this year, but any game with Patrick Mahomes will catch plenty of eyeballs.

We know what kind of defense the 49ers bring to the field every week. On Monday night, however, they brought a ton of offensive firepower, too. This spells trouble not only for a struggling Saints squad but the rest of the NFC, too.

Kicking off the 2022 NFL Thanksgiving games is Buffalo’s second game in Detroit this week, taking on the Lions. Speaking of Detroit, they enter Thursday morning contest on a three-game winning streak, their first such win streak since their 2017 Thanksgiving game against the Vikings.

Both the Cowboys and Giants enter Thursday’s game sitting at 7-3, 5th and 6th in the NFC standings, respectively. A win for either squad would mean a ton moving forward through the final six weeks of a season.

The Patriots may have won and catapulted themselves into the playoff picture last week, but it wasn’t pretty. Things weren’t pretty for the Vikings either last week. If people are going to take Minnesota seriously down the stretch, they need to win Thursday night against a subpar Patriots offense.

After losing their bid for an undefeated season in Week 10, the Eagles almost dropped a second-straight game to the Colts last week. Are teams starting to figure out Nick Sirianni’s squad? As of Wednesday morning, the Eagles are seven-point favorites on the DraftKings Sportsbook.

There’s not much in play here as far as playoff implications go, but it’ll be Jeff Saturday’s head-coaching debut in primetime football for the Colts. A loss for the Steelers would all but eliminate them from postseason play.