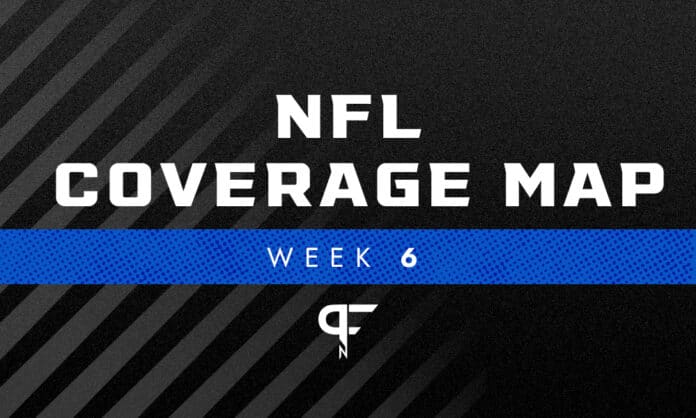 The Week 6 NFL coverage map has been released. What games are going to be broadcast on TV in your area this weekend?

The NFL coverage map for Week 6 has officially been released. This week, CBS will get both the early and late games. Meanwhile, FOX will broadcast just one game on TV. This week, the NFL returns to London for the second time this year as a part of the International Series, while four teams are on a bye.

NFL TV broadcast and coverage maps are courtesy of 506sports.com. The color codes and what games they correspond to are listed below. Listings include CBS, FOX, and prime-time games on NFL Network, NBC, and ESPN.

Teams are on a bye for the first time in Week 6, so there’s not a ton of games to choose from during the early CBS slate. The best of the bunch is arguably the Los Angeles Chargers vs. Baltimore Ravens. That game will feature two young quarterbacks — one a former MVP and the other on the verge of competing for an MVP in 2021. It’ll be a good test to see the Chargers travel to the East Coast for the second time this season after winning in Week 1 vs. Washington.

As you can imagine, the Game of the Week is located in New England as the Patriots host the Dallas Cowboys. CBS’ top crew in Jim Nantz and Tony Romo will be there to cover all the action. Nearly everyone will be tuned into this game with FOX only covering one late-afternoon game in Week 6.

It’s disappointing more people won’t get to see the Cardinals and Browns game this week. While it’s premature to say the matchup is an early Super Bowl preview, Arizona is 5-0 and looking great. Likewise, Cleveland has been competitive each week this season. Viewing the NFL TV map for FOX this week, everyone in green will only get this game, missing out on the early games due to FOX’s single-game coverage in Week 6.

The NFL is back in London for consecutive weeks. Unfortunately for our friends over in the UK, this may very well be less appealing than last week’s Falcons vs. Jets contest. However, the league’s first overall pick in the 2021 NFL Draft coming to town is enough to put some butts in the seats. For those at home, this is a national broadcast so you’ll be able to watch Sunday morning at 9:30 AM ET as long as you have CBS.