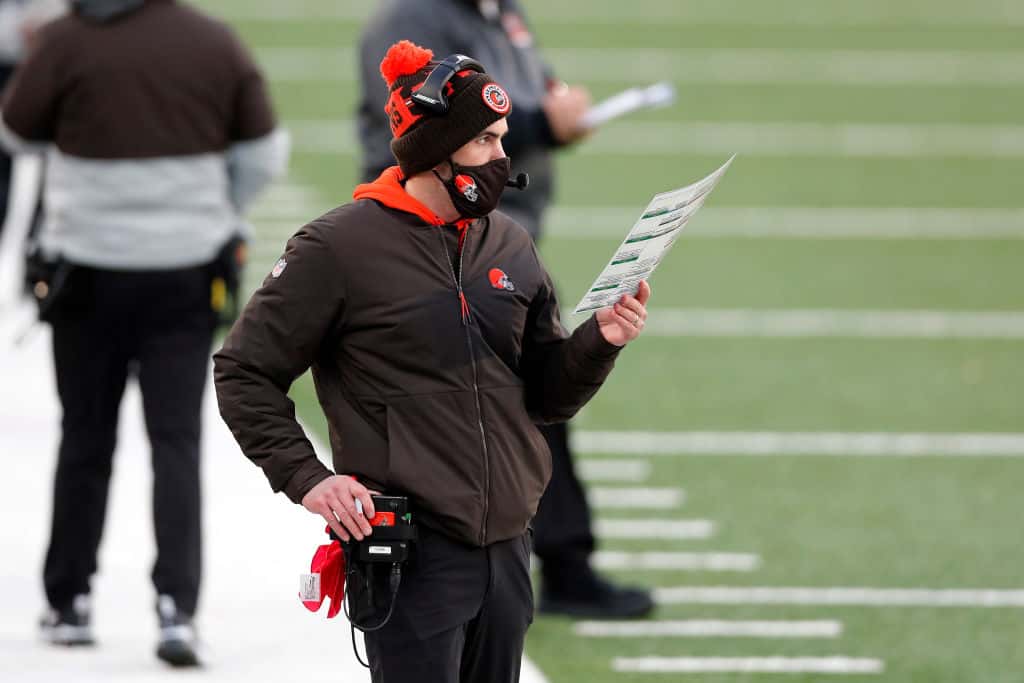 EAST RUTHERFORD, NEW JERSEY - DECEMBER 27: (NEW YORK DAILIES OUT) Head coach Kevin Stefanski of the Cleveland Browns in action against the New York Jets at MetLife Stadium on December 27, 2020 in East Rutherford, New Jersey. The Jets defeated the Browns 23-16. (Photo by Jim McIsaac/Getty Images)
What's in this article? Click to show
Who won the NFL Coach of the Year award?
Other NFL Coach of the Year Candidates
Past winners of the Coach of the Year award
Want more NFL news and analysis?

The 2020 NFL Coach of the Year award was arguably one of the toughest to call out of any NFL award this year. In a year that has seen NFL teams face tougher challenges than any other time in recent history, a number of coaches have stood out and proven their worth to their franchises. But, during the 10th Annual NFL Honors awards ceremony, it was Kevin Stefanski of the Cleveland Browns who was named the 2020 NFL Coach of the Year.

Who won the NFL Coach of the Year award?

One of the more contested awards of the night was the 2020 NFL Coach of the Year. In the end, the turnaround in Cleveland was enough to give head coach Kevin Stefanski the honor. Stefanski led the Browns to their first winning record (11-5) since 2007 and their first playoff appearance since 2002.

After the Cleveland Browns proved to be one of the biggest disappointments in 2019, Kevin Stefanski took over the duties as head coach in the early part of 2020. Stefanski was faced with the task of taking a talented roster and turning them into a winning team. He achieved that goal, despite having a disrupted offseason, zero preseason games, and several incidents to handle throughout the season.

The Browns did not excel in any one area, but they improved across the board. In addition, they had a shot of winning their division for the first time since 1989. That success put Stefanski in pole position for the 2020 NFL Coach of the Year award.

Other NFL Coach of the Year Candidates

Brian Flores’ first season as head coach of the Miami Dolphins ended with plenty of promise. With a hyped offseason, the Dolphins were expected to be contenders for the playoffs in 2020. After a 1-3 start to the season, things looked bleak. However, the Dolphins won nine of their next 11 games to put themselves within a chance of making the playoffs.

Through that run, Flores was willing to make tough decisions. He handed the team over to rookie QB Tua Tagovailoa at the team’s bye week. However, when his rookie QB was struggling, Flores was willing to make the call to bring his veteran QB back into the game. The Dolphins ultimately fell short of the playoffs in Week 17. They still exceeded expectations, however, setting themselves up for a promising future.

Since taking over the Packers, LaFleur has gone 26-6 in the regular season. He has won the NFC North twice now, despite preseason expectations suggesting they might struggle. In 2020, the Green Bay Packers’ offense was among the best in the league when it came to the passing game and a top-10 unit in the run game.

The biggest knock on LaFleur’s 2020 NFL Coach of the Year credentials was that his success has come with one of the best in the game under center. However, under Mike McCarthy, Aaron Rodgers’ game appeared to have stagnated. Under the guidance of LaFleur, Rodgers won his third MVP award.

Much was expected from the Buffalo Bills in 2020. The team was coming off its first 10-win season since 1999, and their main divisional rivals, the New England Patriots, looked prime for the taking. Many teams may fade under that pressure. Sean McDermott and the Bills, however, flourished.

They won 13 games as they finished second in the AFC behind only the Kansas City Chiefs. The offense ranked as one of the best in the league, despite a mediocre run game.

Perhaps the most damaging aspect to McDermott when it came to the 2020 NFL Coach of the Year award was the performance of his defense. A former defensive coordinator presiding over a middle of the pack defense is not ideal. However, McDermott has turned this Bills team into a team that should challenge consistently — that deserves thorough praise.

The head coach of the best team in the NFL always deserves a mention. The Kansas City Chiefs’ projected win line of 11.5 entering this season is considered an extremely high line. Beating it by 2.5 wins and taking home the AFC number one seed is great work from Andy Reid.

Reid has kept his team on track all season, with one of the two losses coming when resting starters in Week 17. At this point, the Chiefs and Reid are taken for granted, but absolutely deserved his candidacy 2020 NFL Coach of the Year award.

An honorable mention has to go to Bruce Arians. In two years, Arians has taken the Buccaneers from a five-win team to an 11-win team. However, the credit for the change in fortunes will be laid as much at Tom Brady’s feet as it is Arians.

Past winners of the Coach of the Year award

The Coach of the Year award has an interesting history. Some of the greats of the game have won the award over the years. However, there are some less glamorous names in the mix as well.

Winning the NFL Coach of the Year award is about elevating your team to a new level, whether that is taking a previous Super Bowl winner back to the playoffs in grand style or turning a perennial losing side into a surprising package.

Since the NFL converted to a 16-game season, only two coaches have won the award despite winning less than 10 games. Only Jimmy Johnson has won the NFL Coach of the Year award with a record below .500 (1990). Therefore, winning is a prerequisite to taking home the award. However, it is not simply about coaching the best team. It is about getting more out of a team than expected.

Who has won the most Associated Press Coach of the Year awards?

The winningest coach in NFL history is also the coach with the most awards. Don Shula won the award four times in a nine-year span between 1964 and 1972. Fittingly, his final award came in the Miami Dolphins’ perfect season.

Since the NFL has gone to a 16-game regular season, Bill Belichick leads the league with three awards. As two of the three winningest coaches of all-time, it is fitting they both top the list when it comes to the most NFL Coach of the Year awards.