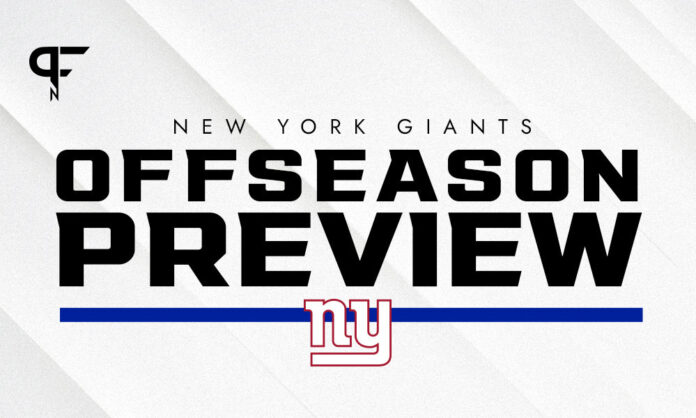 A first look at the New York Giants' 2023 offseason, with a rundown of their free agents, cut candidates, cap space, and team needs.

Brian Daboll and the New York Giants exceeded all expectations in 2022, making the playoffs with what, on paper, looked to be a six-win roster.

Expectations will be far different going forward, however. The standard has been set, and the team we saw in 2022 should be the least talented for the foreseeable future.

But before the Giants can add to their team, they’ll have to figure out who they want to keep from a list of free agents that includes an in-demand quarterback and a star running back.

We break it all down, plus run through all the Giants’ cut candidates, team needs, and more.

The valuation of quarterback Daniel Jones will be fascinating. He’ll obviously get more this offseason than he would have had the Giants picked up his fifth-year option (at $22.4 million).

That’s no longer an option. What is? The franchise tag, which would cost the Giants $10 million more than the fifth-year option. That would be overpaying, in the view of Spotrac’s calculated market value, which pegs an estimated contract at three years, $76.6 million.

However, it’s our view that a solid quarterback with 53 career starts who’s playing the best football of his career that hits the market in the prime of his career will make $30 million-plus AAV, which makes the franchise tag decent value.

Plus, what’s Plan B for the Giants if they let him walk? B-plus quarterbacks get A money all the time simply because the alternative is so scary for teams.

The Giants — who have 11 draft picks but just four in the first two days — have the money and motivation to keep Jones. They’d be foolish not to.

According to Spotrac, the Giants, as of early January, were under the 2023 salary cap by $56.9 million, giving them the third-most cap space in the NFL.

That figure includes $3.8 million in dead cap and $3 million in rollover space. It is based on an estimated $225 million NFL salary cap in 2023.

Overview: Barkley reminded the world just how good he can be when healthy and in a good offensive system in 2022. Barkley at 25 looked like Barkley at 22, and he was a major reason why the Giants overachieved in 2022. A franchise tag at an estimated $12.6 million is a possibility.

Overview: Love was one of the Giants’ very few playmakers on defense in 2022, ranking near the top on the team in tackles for loss and passer rating against. But should he be paid like a top-10 free safety?