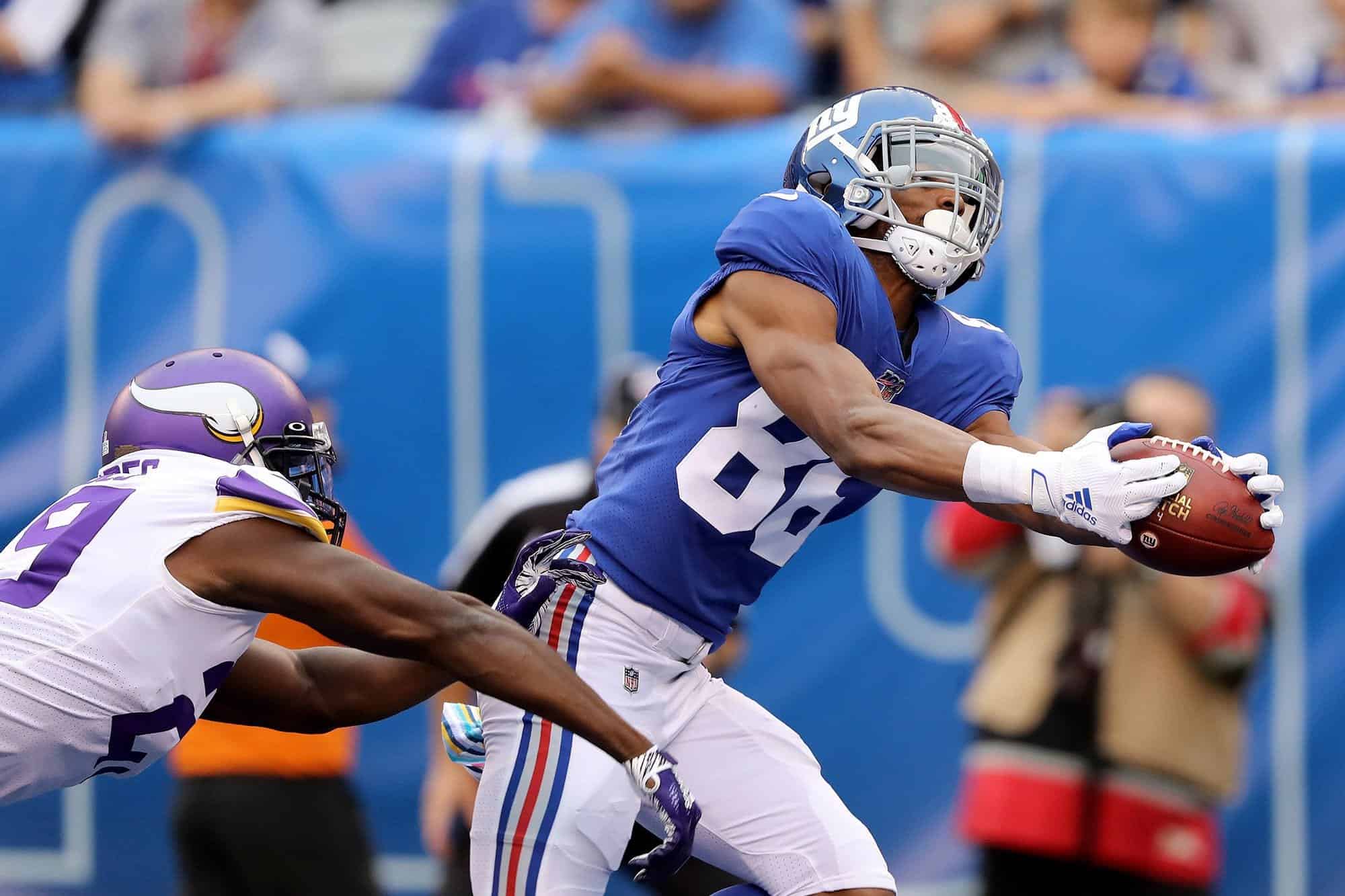 The reason for such a large spread? The Patriots are 5-0, coming off a cruise control 33-7 victory over the Washington Redskins. Their top-ranked defense is 2nd in total yards allowed (1,192), 1st in yards per game (238.4), and 1st in points per game (a paltry 6.8). The Giants, meanwhile, are starting a rookie quarterback in Daniel Jones and will be without their top receiver, running back, and tight end.

Running back Saquon Barkley suffered a high ankle sprain just two weeks ago and is still at least a week away from returning. His backup, Wayne Gallman, is also out with a concussion. Likewise for wide receiver Sterling Shepard, who suffered his second concussion of the season last week vs. the Minnesota Vikings. Tight End Evan Engram has also been ruled out of Thursday night’s game with a sprained MCL. It begs the question, who’s left to play football for the Giants?

We can turn to PFN’s Offensive Share Metric (OSM) to analyze players’ individual contributions to the offensive output. The Offensive Share Metric breaks down who is playing a significant role in the production of an offense. The formula goes beyond traditional statistical analysis to show a player’s contribution to their team based on individual factors only that player can control.

It is graded on a 100-point scale, though this is nearly impossible to achieve as it would mean a player threw the ball, then caught it and somehow also rushed with it simultaneously. Anything over a grade of 33 is considered an elite performance. Do the Giants have anyone performing anywhere near that level for Thursday night?

A deep dive into the OSM grades shows the New York Giants’ offense should go through two men. Last week, the Giants got an elite performance from an unlikely source in fifth-round rookie WR Darius Slayton. His OSM grade against the fourth-ranked Vikings defense was 34.15. Slayton also had an elite OSM grade of 31.00 in a week three victory in Tampa Bay. Receiver Golden Tate, playing in his first game with the Giants last week after a four-game suspension, had an OSM grade of 28.37. Keep in mind these grades aren’t in comparison to the rest of the league but rather an indication of how much these players are contributing to the Giants offense.

To have any shot at upsetting the defending Super Bowl champions, the Giants will need to take to the air. With Barkley and Gallman out, the ground game is now in the hands of undrafted free agent Jon Hilliman and fullback Eli Penny. Hilliman struggled on the ground last week in relief of Gallman, gaining just 20 yards on nine carries. Penny was involved as well with 15 yards on three carries and a reception.

As if Jones wasn’t facing an uphill battle already, he’s also battling a historical trend. Rookie quarterbacks are 0-12 vs. Bill Belichick in New England and average just 200 passing yards in those losses. That number could be lower for Jones when factoring New York’s injuries and the Patriots’ top-ranked defense.

Rookie quarterbacks playing in New England since 2001 are 0-14 with an average margin of defeat of 17 points.

When the Giants limp into Gillette Stadium Thursday night, they’ll need an unlikely hero to step up. Though the OSM grades for Slayton and Tate might seem positive, it also gives you an idea of who New England’s defense will key in on. So who’s left? Receiver Cody Latimer had OSM grades of 21.00 and 26.00 in weeks one and two before being phased out of the game plan and WR Cody Core had a week two OSM grade of 27.00 in his only game with meaningful snaps.

The New York Giants face an uphill battle with their top three offensive weapons missing and a cast of unknowns thrust into the spotlight. Analyzing PFN’s Offensive Share Metric gives us an idea of who they’ll turn to on Thursday night, though history suggests it is an effort in futility.