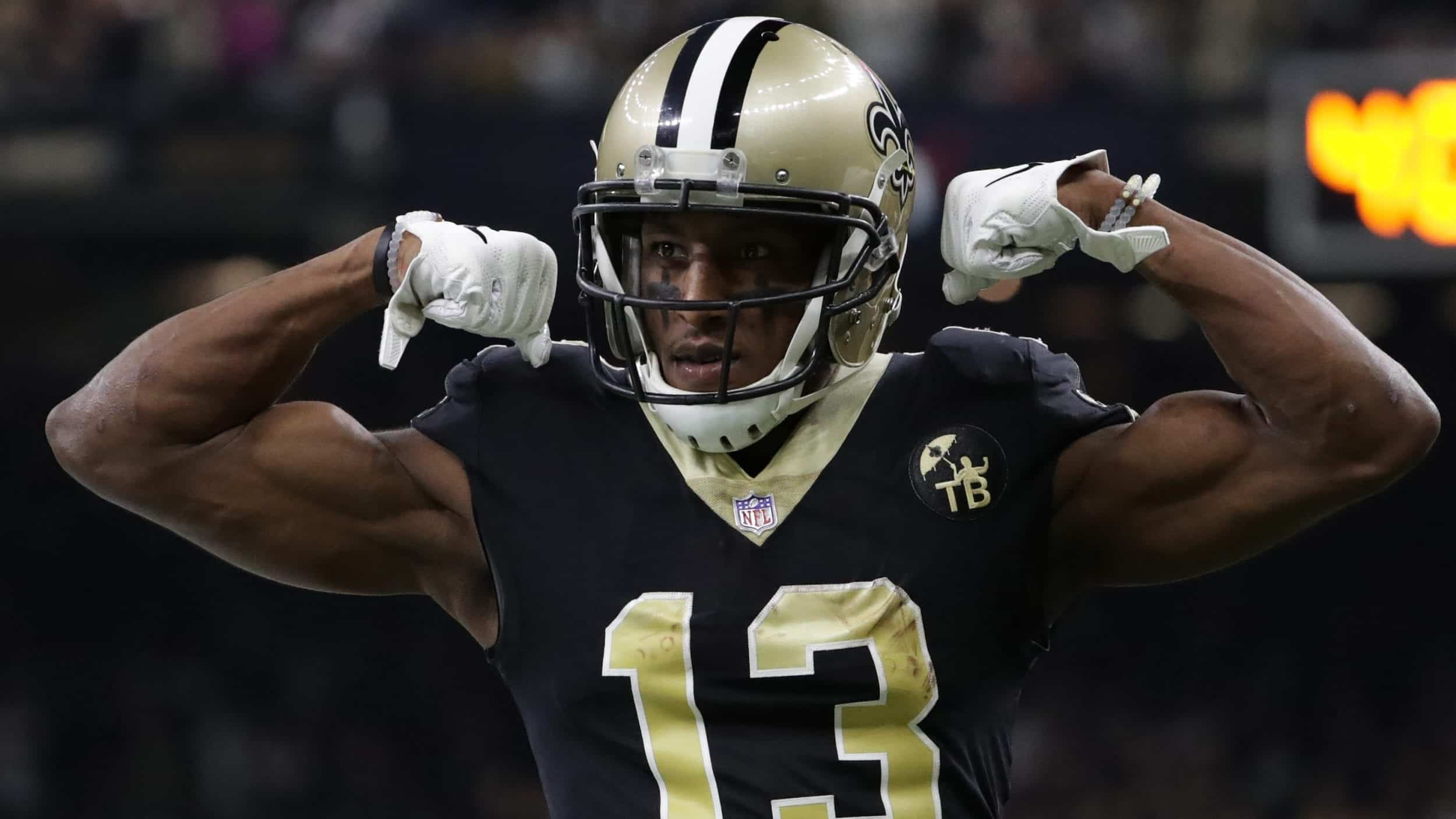 Photo Credit: USA Today
What's in this article? Click to show
The arguments against Michael Thomas as a top-five receiver
Michael Thomas might not have been the most statistically successful wide receiver, but he was incredibly consistent
Thomas’ reliability gave him an excellent OSM grade
The Saints made the right decision, and the only decision, in re-signing Thomas

Michael Thomas just became a very rich man. The New Orleans Saints gave him a five-year, $100 million contract, making him the highest-paid wide receiver in the NFL. Anytime you see a player receive such a massive contract, there will inevitably be questions regarding whether or not they actually warrant that level of investment from their team.

The arguments against Michael Thomas as a top-five receiver

You might argue that no wide receiver is worth that much money. And there are interesting points to be made on both sides of this argument. That said, it’s not a particularly useful conversation. Like it or not, the NFL has determined that this is the amount of money that an elite wide receiver deserves, and arguing about it won’t change anything. The real question is this: Does Michael Thomas deserve to be paid like the best wide receiver in the NFL?

Statistically, Thomas was excellent. Not the best in the NFL in most categories, but still very good. His 1,405 receiving yards was sixth in the NFL, and his nine touchdowns were tied for tenth. Those are definitely elite statistics. But by those numbers alone don’t indicate that Thomas was the best wide receiver in the NFL last year. Looking purely at his stat sheet (which you shouldn’t do, but I’ll get to that), Thomas was a top-ten wide receiver, but not top five.

Thomas also benefited from catching passes from Drew Brees, on plays designed by offensive genius Sean Payton. His statistics were almost certainly enhanced by those advantages, but he still failed to produce at a top-five level. You could argue that his success was more a result of excellent passes by Brees or clever offensive schemes by Payton than his own talents. And based on all of these factors, you might suggest that the Saints overpaid for Thomas. Even though produced at a high level, he didn’t do enough to warrant the massive amount of money that the Saints gave him.

Michael Thomas might not have been the most statistically successful wide receiver, but he was incredibly consistent

These arguments against Thomas fail to take into account what might be his greatest strength: his reliability. Thomas had 125 receptions in 2018, more than any other player in the NFL. And he achieved this statistical milestone despite ending the season outside of the top ten in total targets. He was able to accomplish these statistics because of his 85% catch percentage, the highest among receivers or tight ends with at least 43 targets. That is a ridiculous catch rate for any player, especially one who, as his team’s primary receiving threat, would be consistently targeted by opposing defenses.

Only three other qualifying receivers had a catch percentage of over 80%: Ryan Switzer, Tyler Lockett, and Austin Hooper. None of them had more than 1,000 yards, and only Lockett led his team in receiving yards. Lockett, however, wasn’t even the most targeted receiver on his team. The Seattle Seahawks consistently split targets between Lockett and Doug Baldwin, who received three more targets than Lockett did.

Thomas, on the other hand, was targeted 42 more times than the Saints’ second-most targeted receiver, running back Alvin Kamara. And even though New Orleans targeted him constantly, he still caught just about everything that was thrown his way. At a certain point, you would expect opposing defenses to focus their attention on him, but none of them were able to shut him down consistently. He was one of the most reliable players for one of the best offenses in the NFL in 2018, which really should not be undervalued.

Thomas’ consistent play resulted in an insanely high Pro Football Network’s Offensive Share Metric (OSM) grade of 41, the highest of any wide receiver graded so far. OSM grades players based upon only what they could control, working around factors like team success or strength of schedule. In Thomas’ case, the grade is primarily the result of his high catch percentage. It was simply so much higher than anyone else’s that it provided an immense boost to his grade.

This grade helps to counter critics who suggest that Thomas’ success is merely a product of the players and coaches around him. Yes, the 2018 Saints were both very talented and very well-coached. But in the aspects of the game that he could directly control, Thomas performed exceptionally well. While his high OSM grade doesn’t necessarily suggest that he was the best wide receiver in the NFL, it does imply that he was more responsible for his own production than his critics might suggest.

The Saints made the right decision, and the only decision, in re-signing Thomas

Michael Thomas isn’t the most athletic wide receiver in the NFL, or the most statistically successful. His consistency and reliability, however, make him an incredibly valuable piece for any offense. And because he has been so successful, New Orleans needed to give him a massive contract if they wanted to keep him. That is what the market demands for top-level wide receivers. Thomas definitely qualifies, even if what makes him great is different from most NFL receivers.

Is he the best wide receiver in the NFL? Maybe. It depends on what metric you are using. But ultimately, it doesn’t really matter. Thomas is very, very good, and the Saints were too close to a championship last season to let him go now. Their Super Bowl window is closing fast, and re-signing a player of Thomas’ caliber, even if it cost them a large sum of money, was really the only move that made sense.

Lucas Ellinas is a writer for the Pro Football Network covering the PFN Data Lab. You can follow him @Lucas_Ellinas on Twitter.