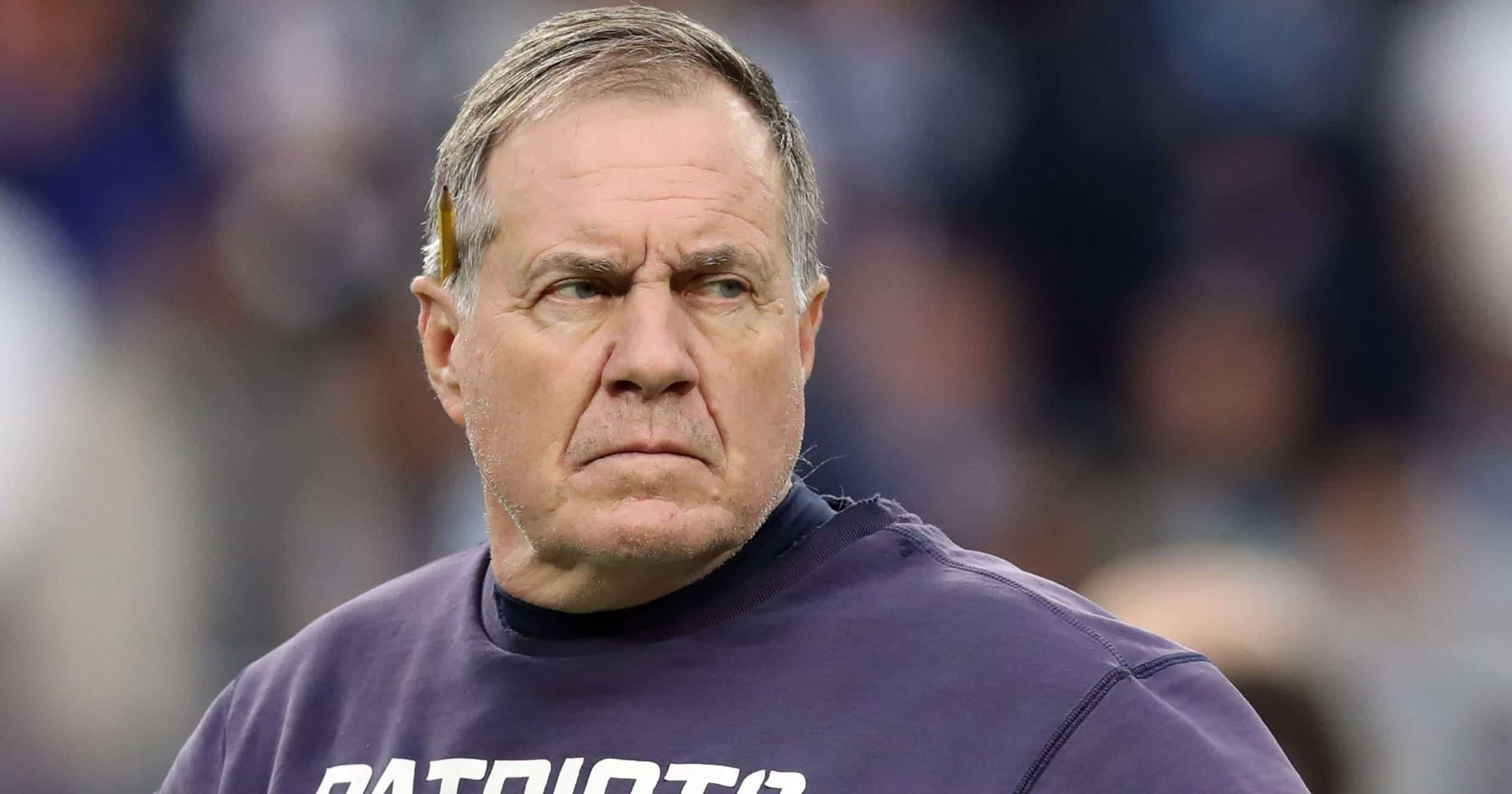 Photo Credit: USA Today
What's in this article? Click to show
The New England Patriots have a knack for shining during the upcoming three-day extravaganza. Armed with plenty of capital, there are a lot of options available to the team in the 2019 NFL Draft.
Draft day trading
Aggressive acts
Needs
Draft plan
An unavoidable issue
What to expect

The New England Patriots have a knack for shining during the upcoming three-day extravaganza. Armed with plenty of capital, there are a lot of options available to the team in the 2019 NFL Draft.

Using the Chase Stuart draft chart, the New England Patriots are tied for the eighth most amount of draft capital in 2019. This is built largely on the team holding six picks in the top 101. Their last two picks in the top 101 – numbers 97 and 101 – are the direct result of New England manipulating the comp pick formula better than anyone else in football.

Given this situation, the Patriots can go any route they want. They can sit there and continuously select the best player repeatedly. They can get aggressive and move up the board for a prospect they love. Or, they can do what they love most, trade down to accumulate even more picks.

Thanks to analytics, a good amount of teams have realized the best draft strategy is to trade down and acquire more picks. The draft is essentially a crapshoot, and there isn’t much evidence that any one team is any better than any other team at selecting college prospects. Due to this, the best idea is to simply be holding the most lottery tickets when the drawing happens.

Why getting back into the second round costs a future first-round pick is something no one has ever explained. But the math is so clearly skewed in one team’s direction that Belichick takes the deal every time.

This type of instinctive understanding of how to work the draft has resulted in Belichick’s incredibly valuable draft day trades throughout the years. Watching it unfold live can be aggravating as a Patriot fan. When Dez Bryant is on the board you draft Dez Bryant! Belichick essentially created #trusttheprocess before Joel Embiid had even relocated to the United States.

The Patriots tend not to foray into high-priced free agency. They rented Darrelle Revis and shelled out for both Adalius Thomas and Rosevelt Colvin, but that’s more or less the entire list (with one exception to be mentioned in a moment). This, coupled with New England’s penchant for trading down in the draft, makes the team – for lack of a better word – passive in most offseasons. They’re always hunting for bargains.

There are a few instances, however, in which the Patriots were very aggressive during an offseason. The first is 2007, after blowing the biggest halftime lead in conference championship game history to the Indianapolis Colts. Belichick went nuclear and brought in Randy Moss, Wes Welker, Donte Stallworth, and the aforementioned Thomas.

In 2012, New England actually traded up in the first round twice in order to land Chandler Jones and Dont’a Hightower. In 2017, the Patriots gave Stephon Gilmore a five year, $65 million contract, traded their first-round pick for Brandin Cooks, and performed two more draft pick swap trades to import Kony Ealy and Dwayne Allen.

The 2007 offseason maneuvering delivered an undefeated regular season before the most iconic Super Bowl loss in league history. While the Patriots did not make the Super Bowl following the 2012 draft, Jones and Hightower were key players on the 2014 title team. The 2017 team made the Super Bowl and lost an outrageous shootout to the Philadelphia Eagles.

Chronologically speaking, the first two aggressive offseasons have a common thread. The prior season ended in an unacceptable fashion. The 2006 team blew that lead to the Colts. One of the most forgotten plays in NFL history is Reche Caldwell standing still, uncovered, and dropping a pass at the Colts’ 15-yard line.

It isn’t a coincidence that Moss, Welker, and Stallworth were all brought into the fold within the next three months.

The 2011 team couldn’t get a final stop to beat the New York Giants. The 2011 defense was insufferably terribly, as they ranked 30th in DVOA that year. The Patriots needed defense. Tons of it. Any position. New England even hit on both picks. Jones has been a premier pass rusher since entering the league, and Hightower has repeatedly come up big for the Patriots in the biggest games.

In 2017, New England had the cap flexibility to go all in on repeating as Super Bowl champions. That isn’t often the situation for the club, as they have essentially no wiggle room this offseason for example.

Belichick saw an opportunity to build a super team, but the 2017 team suffered the same fate as the 2011 team. Tom Brady dragged the 31st ranked defense by DVOA to the Super Bowl, where they subsequently lost to an NFC East team because the New England defense could not get one final stop.

You’d think perhaps the unacceptable ending to the 2017 season might induce another offseason rage spree, but instead, Belichick decided to trust the internal improvements lurking on the roster.

Due to being cap strapped, the Patriots have made minor moves. So far they have been nothing that resembles aggressive. The 2017 offseason is really the outlier in terms of how New England has managed the roster following a Super Bowl victory.

The team did successfully replace Trey Flowers by taking advantage of another massive market inefficiency. For whatever reason, teams are willing to trade away productive veterans for the cost of swapping late round picks. After a certain point, late picks don’t have a discernible difference in value. Moving down 50 spots in order to pick up a veteran is essentially getting the veteran for free.

In this instance, the Patriots sent a 2020 5th round pick in order to receive Michael Bennett and a 2020 7th rounder. Yet, this is the biggest move the team made. They attempted to court both Adam Humphrey and Jared Cook to Foxborough, but both sought other opportunities. New England has made other moves around the edges, but the Patriots have larger needs than your typical defending Super Bowl champions.

The most obvious need on the roster is passing game weapons. This encompasses wide receivers and tight ends, where both positions need an infusion of talent. If you had to choose which specific position is in more dire need of attention, TE would win. In addition to Rob Gronkowski retiring, New England parted ways with Allen, meaning the team doesn’t even have quality blocking play lined up at the position at the moment.

At WR, the team at least has Julian Edelman and, to a (much) lesser extent, Phillip Dorsett. As it stands, those are the only two receivers on the roster with any form of chemistry with Tom Brady. (Tangent: Josh Gordon should be assumed to contribute zero in 2019, and anything above that is a gift).

There is a reasonable argument the team has a need at left tackle. Trent Brown sought greener pastures (get it?), while Isaiah Wynn missed his rookie season due to injury. Defensively, the team could justifiably add a player at any front seven position. Even with the addition of Bennett, the Patriots are still short on edge rushers. They struggled to generate a consistent pass rush during the 2018 regular season. Furthermore, the team never replaced the interior rush Dominique Easley provided after parting ways with the often injured defensive tackle.

Lastly, for years one of New England’s biggest weaknesses has been coverage play from their linebackers, and given the structure of Dont’a Hightower’s contract, 2019 may be the two time Super Bowl hero’s final season on the roster.

Anything is an option. Trading up is unlikely but not unprecedented. It is nearly a guarantee one of those six top 101 picks will be traded, either in an effort to move down and acquire more picks or accumulate future picks. In terms of targets, Belichick’s philosophy is to take the best player. Last year he even took Sony Michel in the first round. Prior to that, no team epitomized the “you can find a running back anywhere” ideology more so than the Patriots. Belichick has previously mentioned he believes reaching for a need doesn’t fill the need.

However, the Patriots will acquire a veteran via trade in order to fill a need. The Brown trade from 2018 is significant because it is an example of the Patriots constructing a deal seemingly out of nowhere. Upon signing Brown to a record-setting contract, Jon Gruden talked about how he would have been interested in acquiring Brown last year had he known Brown was available. He then added this commentary:

At this moment in time, it may appear New England will become overly reliant upon rookie pass catchers in 2019. Fear not, Pats Nation. A trade for nearly any receiver in the league could magically show up on your Twitter feed any time between now and the conclusion of the draft.

Which bodes well because there is…

For all the Patriots success in the draft, be it finding late round gems, ripping off dumb teams in trades, or simply successfully drafting good players in the first round, there is an absolute Achilles heel to this regime. For the life of the Belichick era, the Patriots are constitutionally incapable of drafting receivers.

(Yes, I’m prepared for the flood of hatred showing up in my mentions about how two Patriots homegrown wide receivers possess Super Bowl MVP trophies, but Deion Branch and Edelman are extreme exceptions to the rule)

Since 2000, in addition to Branch, New England has used a fourth-round pick or higher at the receiver position to draft Bethel Johnson, Chad Jackson (this was even a rare Belichick trade up), Brandon Tate, Taylor Price, Aaron Dobson, Josh Boyce, and Malcolm Mitchell (who looked like a quality player before injuries ruined his young career).

Again, anything is on the table. The defending Super Bowl champions have six picks in the top 101. They can confidently sit back and continuously select the best player available. However, this particular iteration of a defending champion has more glaring weaknesses than a typical unit coming off a Lombardi trophy. If the value matches up with the pick the Patriots will fulfill the need. If it doesn’t New England will select a superior prospect almost regardless of position.

Yet it is likely naive to think Belichick won’t make a move to address his lack of receiving talent. The Patriots made an offer to Humphries of $9 million per season, but Humphries chose Tennessee. New England also courted Cook prior to Gronkowski’s retirement, and then ramped up the recruiting effort after the retirement announcement. Cook, like Humphrey, chose another option.

While Belichick always drafts the best player available, he fills needs with veterans. Whether through free agency or trade, this is how the Patriots address the areas in which they’re lacking talent. Remember, no one will know the targeted player is available until Adam Schefter tells you the deal is already done.