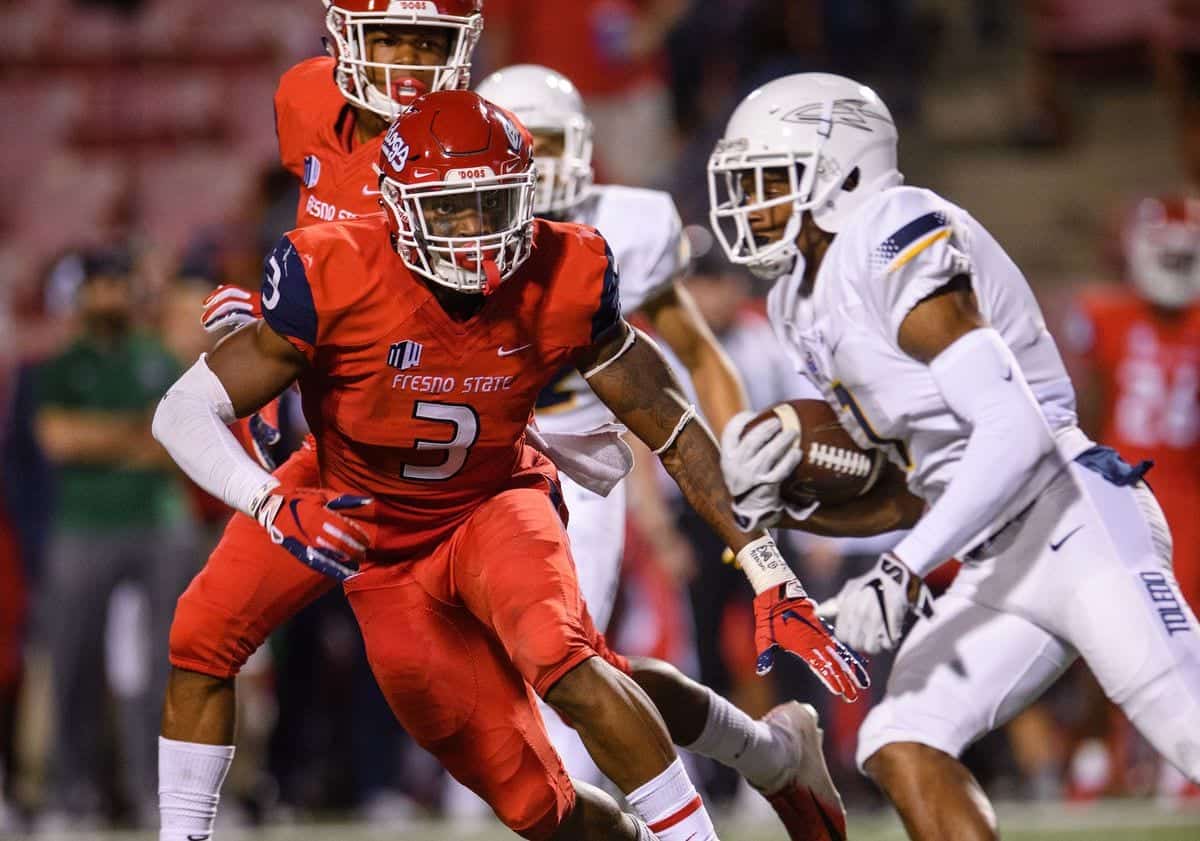 The NFL Draft is the ultimate proving ground of a long and arduous evaluation cycle. It’s where mock drafts and big boards are laid to rest, and where the cream typically rises to the top. While the oft-maligned crop of linebackers in the 2020 NFL Draft is largely considered to be top-heavy, and a position commonly glossed over when assessing the depth of the class, there are several appealing mid-round options that possess the talent to become instant contributors as rookies. Fresno State linebacker Mykal Walker is an intriguing NFL Draft prospect who has enjoyed a strong pre-draft process, effectively positioning himself to hear his name called earlier than some anticipate on draft day.

Mykal Walker developed an inherent ability to adapt to constant change at an early age.

Though he grew up in Sacramento, California with his mother Kendra, Walker would make the hour-and-a-half trip to Vacaville every other weekend to visit his father, Michael.

“Growing up as a kid, there wasn’t too many over-the-weekend hangouts, because I was always leaving,” Walker said. “But my parents made the most of it.”

In fact, Michael jumped at the opportunity to coach his son on the Rosemont Wolverines, even though the daily commute was less than desirable. Each day, Michael braved the unrelenting rush hour traffic, making the 90-minute drive up from San Francisco in time for 5:30 practice.

Despite being considered the smallest six-year old on the Wolverines, Walker was first deployed at defensive end — a daunting task that yielded mixed results.

“I was like the smallest, shortest, skinniest little kid on the field,” Walker said. “I used to jump down in front of the ball carrier, and then he’d trip over me. That’s how I made my tackles.”

While many expected Walker to quit at the first sign of adversity, he instead stood tall and seized his opportunity, earning the respect of the entire Pop Warner organization in the process. Shortly following his defensive end experiment, Walker made the move to the second level as a linebacker, and hasn’t looked back.

After years of wreaking havoc in the Pop Warner ranks, Walker graduated to the high school level. As he navigated his way through the early years of his playing career, Walker expressed interest in making the position switch to safety. His new set of coaches, however, had other ideas.

“My freshman year of high school, the coaches asked all the kids to go where they think they are,” Walker explained. “Well, the very first practice, I run over there to the [defensive back] section to play safety, and they said my feet were too big and sent me to linebacker.”

At Vacaville High School, Walker thrived as a three-sport athlete, competing in football, basketball, and track and field. On the gridiron, Walker was a two-way standout at linebacker and running back, leading the team with 112 tackles as a senior, while rushing for 577 yards and eight touchdowns.

Walker’s recruiting process was a fickle one. While he received an offer from San Diego State as a junior, Walker opted to place it on hold in hopes of garnering Pac-12 consideration. Initially, it appeared as though California was the heavy favorite to land Walker, but his recruiter was fired, which all but ended contact. Then, Oregon State showed interest in the promising linebacker, but the entire staff fled for Nebraska late in the process.

By the time Walker circled back to San Diego State, the Aztecs had already offered three other linebackers, and could only propose a grayshirt opportunity.

With time dwindling down and his options shrinking by the day, Walker ultimately decided to attend Azusa Pacific University.

Initially, the thought of once having multiple top-level college programs in his grasp — only to attend a private university with an enrollment of just over 10,000 — was a hard pill to swallow for Walker.

“It was tough,” Walker admitted. “All freshmen had to live in the dorms, and I’m seeing all these other guys that I played football with or against in different camps here and there, posting all this stuff on social media while I’m sitting in a dorm room.”

As a freshman, Walker saw action in nine games for the Cougars, amassing 40 tackles (3.5 for loss), a sack, and an interception. The following season, he notched 102 tackles (11.5 for loss), three sacks, two interceptions, and a blocked kick, earning himself first-team All-Great Northwest Athletic Conference honors for his efforts.

While Walker undoubtedly left his mark on the football field, he made even bigger strides off of it as a leader. Typically the type to keep to himself, Walker ultimately found a style that best suited his personality, evolving into a player that leads by example and prides himself on taking care of the little things.

By the conclusion of his 2016 season, Walker was ready for a change of scenery. After finalizing his release from Azusa Pacific, Walker did extensive research in hopes of finding the ideal landing spot, and learned that Fresno State had an all-new coaching staff in place for the 2017 campaign.

As for Azusa Pacific, Walker fondly looks back on his two-year stint and is forever grateful for the relationships forged and personal growth.

“I wouldn’t change it for the world,” Walker said. “I met some incredible people, some females and guys that changed my life for the better. I’ll never regret making that decision.”

Though NCAA rules required him to sit out the 2017 season, the idle year proved to be an invaluable experience for the multifaceted Walker. On the scout team, the 6-foot-3, 230-pounder gained experience playing inside linebacker, outside linebacker, and defensive end — versatility that would serve him well later in his career.

By the time he finally took the field as a redshirt junior, Walker was firing on all cylinders. In 14 games, Walker totaled 87 tackles (14 for loss), 4.5 sacks, two forced fumbles, two fumble recoveries, an interception, and two blocked kicks. He earned first-team All-Mountain West honors and was named Defensive MVP of the Mountain West Championship Game.

Walker’s untraditional road to college football prominence culminated with an invitation to attend the 95th annual East-West Shrine Bowl in St. Petersburg, Florida, where he quickly established himself as the most pro-ready linebacker in attendance. Frequently flashing his athleticism, versatility, and football intelligence to evaluators throughout the week, Walker boosted his NFL Draft prospect profile with a standout performance.

The NFL Scouting Combine often presents its own unique challenges, whether it’s the extensive medical testing, team interviews, or media availability. In Walker’s case, it was an unforeseen challenge upon arrival that nearly spoiled his week.

“Me and Jabari [Zuniga] get the last flight, so we literally get there at 6 PM, and orientation starts at 6:30,” Walker explained. “So, we’re scrambling to get our stuff. I get an assistant to help me bring my stuff up to my room. I open up the bag, and it’s not my bag. So, now, it’s like 6:12 and I’m sweating, thinking ‘I’m about to be the only guy late on the first day of the NFL Combine.’ I run downstairs and find my bag; I didn’t have my backpack, but you had to wear the Combine gear, no matter where you were, every day. So, I’m like, ‘Okay, I’m gonna throw on some of this stuff, run downstairs and I’m gonna make it.’ I get in the elevator, and Jalen Hurts is holding my backpack.”

Following a week of heavy scrutiny, Walker was afforded his long-awaited opportunity to prove himself as an NFL Draft prospect in front of a stadium full of next-level decision makers. He was officially clocked at a 4.65 40-yard dash, while recording 20 reps on the bench press, a 33-inch vertical, 122-inch broad jump, and a 7.09 three-cone.

The on-field portion was where Walker truly shined, however, demonstrating fluidity, explosion, and attention to detail in each of the drills.

Mykal Walker has taken anything but a traditional path to the 2020 NFL Draft.

Throughout his winding journey, one that includes stops at different institutions and various position changes, Walker has evolved into a convincing leader and a versatile defender equipped to fit any scheme at the next level. He answered questions about his lateral movement and burst on the grand stages of the NFL Combine and proved to be a consistent, dominant force at the Shrine Bowl. For a linebacker class that many deem to be underwhelming, Walker has managed to emerge from the pack, putting himself in the early Day 3 conversation.

Walker possesses the ability to play a multitude of positions, but his best fit will likely be as an inside or weakside linebacker at the next level, where his range, instincts, and pass rush prowess would be best served. While he may not see the field as a regular defensive contributor in the early goings, Walker’s ability to wear a myriad of hats on game day, in addition to his special teams contributions, should earn him playing time as a rookie.

“My road to this moment has been so up and down, so untraditional to get to the 2020 NFL Draft,” Walker said. “All the hard work I put in, all the broken roads I had to fix and make my route, it really came to fruition. I hope to get my name called — it will be the best day of my life.”

For someone who was merely an afterthought just a few years ago, NFL Draft prospect Mykal Walker has positioned himself for success as he prepares to embark on his next journey.