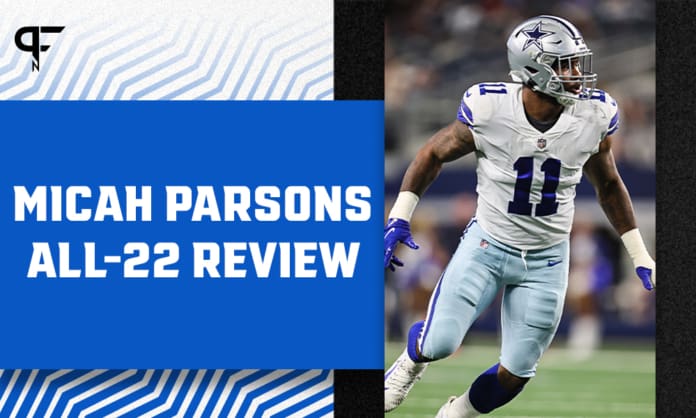 Micah Parsons played defensive end for the first time since high school on Sunday. He was still the Cowboys' best player on defense.

By Dalton Miller
September 21, 2021
What's in this article? Click to show
Micah Parsons dominated Storm Norton
He battled Rashawn Slater, but experience prevailed
The Downside of Parsons as an EDGE

With Randy Gregory on the reserve/COVID-19 list last week, the Cowboys decided that first-round pick Micah Parsons would change positions to defensive end for the defense. I was skeptical when I first saw the reported move. I imagined they’d use him in that role and as an off-ball linebacker. Wrong, I was. But how’d he do playing defensive end?

We’ve all seen the clips on Twitter by this point. Parsons won in a multitude of ways against the second-year player out of Toledo. He used speed, power, high-level hand usage, and won both inside and out throughout the contest. Let’s take a look at a few and discuss what we could see from Parsons moving forward.

There’s a reason he finished tied for the league lead with 8 pressures on Sunday. Against replacement-level players, Parsons will feast. He’s a different tier of athlete when compared with even the rest of these 1% physical talents. That was evident on this rep.

Parsons and Osa Odighizuwa have a little game going here. Hopefully, it’s something Cowboys fans get to see for the next 8-10 years. Parsons plants an inside counter on his rush, allowing Odighizuwa to take a wide track and cover the potential scramble from Justin Herbert.

Parsons threatens Norton’s outside shoulder and jabs hard, forcing an overset from Norton. Up to this point, Parsons had already won multiple times around the arc. It was only a matter of time before he won inside.

Parsons gets Norton leaning with his inside hand strike. This allows Parsons to club behind Norton’s shoulder and rip through with a bit of a shoulder dip. He gets even with Norton, and that’s all it took.

But what’s most impressive is how he changes direction and explodes to close the gap on Herbert. Not many guys can get Herbert in their grasp like Parsons did here.

This was a massive incompletion for the Cowboys’ defense. And it can be directly attributed to Parsons getting in Herbert’s head a little bit by this point. The pressure he got on him helps as well.

Norton keeps a good half-man relationship with Parsons, but he doesn’t remain patient with his strike. He shoots early with his outside hand, and Parsons perfectly times a swipe and swims on the backup tackle.

That’s when his freakish athleticism shines.

Parsons is still moving upfield, and Norton attempts to shove him up the arc and past his quarterback. Unfortunately for him, Parsons can wipe Norton’s arm and delete any loop to his rush angle. At that point, Herbert is already sliding left and towards Odighizuwa.

Because of that drift, this ball lands behind Jared Cook, and Jaylon Smith gets a pass breakup. The Chargers were forced into a field goal on the next play.

But that wasn’t the only play he made on that series.

Micah Parsons vs. the option

Parsons did many spectacular things playing on the edge Sunday, but this is easily the most aesthetically pleasing. Parsons jabs right, which forced Norton to counter with a bit of a jump set. That’s all Parsons needed.

He gets Norton reaching with his outside hand instead of striking, so Parsons reduces his surface area and swims overtop the block. A lot of defenders can do this, but not many do it consistently while gaining ground on the ball carrier. Usually, the matador nature of the move lends to a retreat.

Parsons wins with explosion and saves what was going to be a 1v1 with Herbert and Smith on a crucial red-zone drive. His ability as a backside defender on the edge will be tough to match by anyone else in the league.

Why? Well, Parsons already plays at a different speed than anyone else remotely his size. But what is making him so special so early in his career is how hard he plays. It’s also why he won’t, and shouldn’t, play over 90% of the defensive snaps. He’d never be without the oxygen mask if he did.

Parsons was outstanding as a rusher on the left side of the defense, but he did not enjoy the same success lining up opposite of Rashawn Slater. Yet, there’s nothing wrong with that.

Parsons hasn’t played as a dedicated EDGE since his high school days. Although he appears to have all the pass-rush tools in the shed, there’s a level of sharpening necessary to perform them consistently on the field.

This was about the outcome almost every time Parsons lined up against Slater. Timing is so crucial for offensive and defensive linemen.

Slater’s patience is evident here. He mixed up his strikes in pass protection throughout the contest, never allowing Parsons to hone in on how he’d be attacked on a given play. That cat and mouse game between blocker and rusher is something that goes underreported.

A lot of times, pass rushers will “feel out” offensive tackles for a while, trying to get a key on tendencies in-game. Maybe if we had seen Parsons vs. Slater for 20 snaps, we could have seen him win a few.

Intelligently, the Cowboys decided to just play the advantageous matchup, and it might have won the Cowboys the game.

The Downside of Parsons as an EDGE

In Week 1, Parsons played 78% of the Cowboys’ defensive snaps. He rushed on 13 reps, defended the run on 9 plays, and dropped into coverage 29 times.

In Week 2, Parsons played only 55% of the defensive snaps. He defended the run 9 times, rushed the passer 27 times, and dropped into coverage 3 times. In total, he played 12 fewer snaps in Week 2.

And the Cowboys’ defense struggled mightily when he was off the field.

This is just one example where Parsons’ presence would have almost surely been felt. Even if he didn’t win immediately, his motor and athleticism probably would have found a way to make things more difficult for Herbert here, particularly if he was playing left defensive end.

Dallas’ defense needs Parsons on the field as much as possible. He’s not developed enough as a pass rusher — I don’t believe — to win consistently against high-end competition.

I also believe his impact could and should be felt as an interior blitzer. His burst is incredibly dangerous on the interior, as he gets to shoot a shoulder and attempt to collapse the pocket. If we know anything, it’s that interior pressure is king.

One thing is certain — Micah Parsons is special.