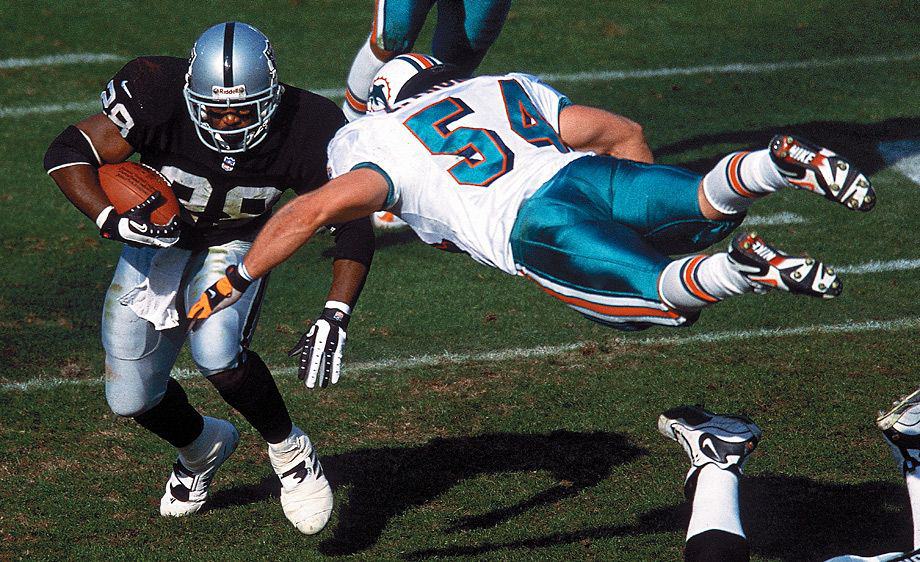 The Miami Dolphins took a chance on an undersized middle linebacker out of Texas Tech with the 154th pick in the 1996 National Football League draft. That player’s name was Zach Thomas, and he rewarded the Dolphins with the best twelve seasons anyone has ever seen from a linebacker in Miami.

Thomas played a total of thirteen seasons in the NFL. His last was with his hometown Dallas Cowboys, where at 35 years old he was still able to produce at a high level. The guy that was supposedly too small to play in the NFL finished his career with five All-Pro honors and seven trips to Hawaii to play in the Pro Bowl. Along with those accomplishments, Thomas currently sits with the fifth most combined tackles in NFL history. So, with all of these accolades, why after six years of eligibility, isn’t he in the Pro Football Hall of Fame?

Comparing Zach Thomas to players in the Hall of Fame

There are 27 linebackers currently in the Hall of Fame. Eleven of these all-time greats were inducted after Thomas hung up the cleats and six of those players were inducted within the time frame that Thomas has been eligible. Let’s look at a couple that stand out to me. 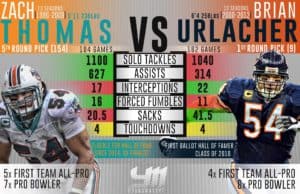 If you look at the above graphic, you might be surprised to know that Brian Urlacher was a first-ballot Hall-of-Famer. Thomas, on the other hand, was named a semi-finalist for the first time this year. Urlacher was a dominant linebacker in his time, but was he that much better than Thomas?

The answer is simple; no. The only stat that stands out in favor of Urlacher is sacks. However, if you look at career tackles, Thomas sits 13 spots higher than Urlacher on the all-time list. In my opinion, there are two reasons why Urlacher was a first-ballot Hall-of-Famer, and Thomas wasn’t. First, the former Chicago Bears great was the ninth overall pick in the 2000 NFL Draft while Thomas wasn’t drafted until the fifth round by the Miami Dolphins in 1996.

The second reason was Urlacher’s openness to the media. He appeared in multiple commercials throughout his career while Thomas preferred to keep to himself and fly under the radar. Urlacher was a household name to football fans, Thomas was the contrary.

Derrick Brooks was drafted one season before Thomas and retired the same year. Brooks sits one spot behind Thomas in the all-time tackles list. Brooks also finished with five All-Pro honors, and his stats are very close to Thomas’.

The former Tampa Bay Buccaneers’ linebacker finished his career with slightly more interceptions and forced fumbles than Thomas, but fewer career sacks. Brooks was fortunate to play on the 2002 Buccaneers who fielded one of the best defenses of all time and won the Super Bowl that year. But does one Super Bowl win on one of the best defenses get you to the Hall of Fame over a comparable player?

When will the former Miami Dolphins linebacker get in?

The Hall of Fame is supposed to be based on a player’s achievements. So why have two players who played in the same era as Thomas with similar stats reached the pinnacle of football while Thomas sits at home waiting for the call?

Six years after eligibility, Thomas finally saw life in his push toward the Hall of Fame. He was finally named a semi-finalist in 2019, which means he was deemed one of the 24 best options for the Hall of Fame this year. Unfortunately, he didn’t make it to the finalist round, but it’s a start.

It also seems that Thomas is starting to get a good push from social media. The Miami Dolphins media team posted a video showing some of his great plays recently that seemed to pick up some traction.

? Zach Thomas was a MONSTER ? pic.twitter.com/nBneppsJNu

Maybe by this time next year voters will open their eyes and realize the travesty of leaving Thomas out of the Hall of Fame, and they’ll send him to the promised land of football greats.

Jessee Lopez is a writer for PFN covering the Miami Dolphins. You can follow him @jlopez_416 on Twitter.