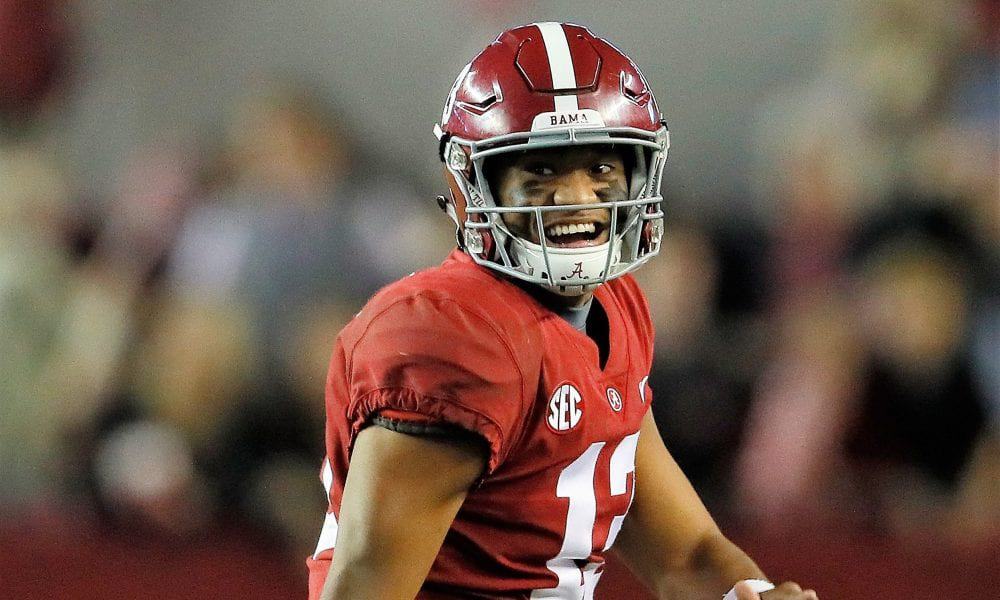 Photo: USA Today
What's in this article? Click to show
Do the Dolphins like Jordan Love more than Justin Herbert?
Will the Dolphins be in a position to draft Tua Tagovailoa?
What about the meeting with the Dolphins and Tagovailoa?
There’s still a long way to go before the 2020 NFL Draft

The Miami Dolphins have done a masterful job of creating a smokescreen when it comes to who their quarterback target is in the 2020 NFL Draft. Doing this was necessary because throughout the 2019 NFL season, it was obvious that the Dolphins had tremendous interest in Alabama Crimson Tide QB Tua Tagovailoa.

And when it became that much more obvious to the rest of the NFL in the weeks leading up to the Senior Bowl and NFL Scouting Combine, the Dolphins had to do something to knock people off their trail.

If that was their intent, then mission accomplished. The whispers at the NFL Scouting Combine regarding which quarterback the Dolphins truly liked – Joe Burrow, Jordan Love, Justin Herbert, or Tagovailoa – were all over the map.

However, it all became a bit clearer on Thursday afternoon (February 26) when PFN received a tip from a credible source in the Media Room that the Dolphins have Utah State QB Jordan Love ranked ahead of Oregon Ducks QB Justin Herbert.

Do the Dolphins like Jordan Love more than Justin Herbert?

When we received this tip, our attention at the time was not trying to figure out whether the Dolphins primary QB target was Love, Herbert, Tagovailoa, or Burrow. We simply wanted to know – do the Dolphins really have Love ranked higher than Herbert?

PFN Insider Ben Allbright quickly found out that the increasing fascination with Love and Herbert was being touted to gain leverage back in a possible trade with the Detroit Lions. This is important because Allbright had previously reported that the Dolphins have already talked to the Lions about a potential trade, but nothing imminent was on the horizon. One could presume that the Lions were asking for too much in return, and this could be a way to lower the asking price.

With that out of the way, the focus then turned to what quarterback they were targeting. As Allbright and PFN Co-Owner Matt Infante continued to check with their sources, the conversation kept turning back to one player – Tua Tagovailoa. This scenario has also been reported by Barry Jackson of the Miami Herald, with a note in his article stating that “they still prefer Tua Tagovailoa if his medicals check out over all other quarterbacks not named Joe Burrow.”

Will the Dolphins be in a position to draft Tua Tagovailoa?

While sources told Allbright and Infante that the target is Tagovailoa, it should be noted that PFN heard a caveat from one of these sources who said, “It’s Tua…if they can get him.”

If you’re a Dolphins fan who wants Miami to draft Tagovailoa, those five words – if they can get him – should scare you. That’s because no one truly knows what’s going to happen in the weeks leading up to the NFL Draft. And when Commissioner Roger Goodell opens the Draft in Las Vegas in just over a month, it’s anyone’s guess as to what teams will make moves up or down to get the player they covet.

But, through our conversations with sources, we are led to believe that as of now, teams such as the Washington Redskins and Detroit Lions are playing the leverage game. On February 28, Allbright reported as such.

“While there is plenty of talk about Redskins and Lions possibly selecting a quarterback in the first round of the 2020 NFL Draft, both teams see this as an opportunity to potentially trade down with a QB-needy team (such as the Dolphins or Chargers), multiply their picks, and still get top talent. Neither are interested in drafting a quarterback but are leaking this information to try to generate interest.”

This goes in line with what PFN Insider Tony Pauline reported on February 25.

“Interestingly enough, Tua has an official 45 meeting with the Washington Redskins at the Combine. While there are some in the Washington organization not sold on Dwayne Haskins, I would not read too much into this. Though an interesting talking point, in the end, I believe it’s Washington doing their due diligence.”

What about the meeting with the Dolphins and Tagovailoa?

Some may point to the odd meeting between the Dolphins and Tagovailoa – first reported by the South Florida Sun-Sentinel – as a sign that they may not be targeting him.

When speaking to the Sentinel several days ago, a source spoke of the meeting, saying, “How am I [Tagovailoa] supposed to feel like it’s the right place for me if they act like that…maybe, they are after Justin Herbert…no one was excited…they didn’t give any indication of ‘he’s their guy.’ He felt weird, like is this a joke…He’s not turned off, but it was just weird.”

However, PFN has learned that this is now the way the Dolphins conduct business. As one representative who had several clients meet with the Dolphins last year told us, “Some of my guys came out feeling perplexed about what happened. There was a weird vibe in there and they didn’t know what to make of it.”

With that information, it’s safe to say that too much should not be made of this meeting.

Although reports state that his medicals from the Combine checked out well, he will still need to show teams that he can throw and move around in the pocket either at his personal Pro Day on April 9 or another date if he is not cleared by then.

If the Dolphins decide that his injury history is too much of a risk, and if Burrow is off the board when they are on the clock, they’ll then turn their attention to who PFN believes is the next quarterback on the Dolphins’ board – Jordan Love.