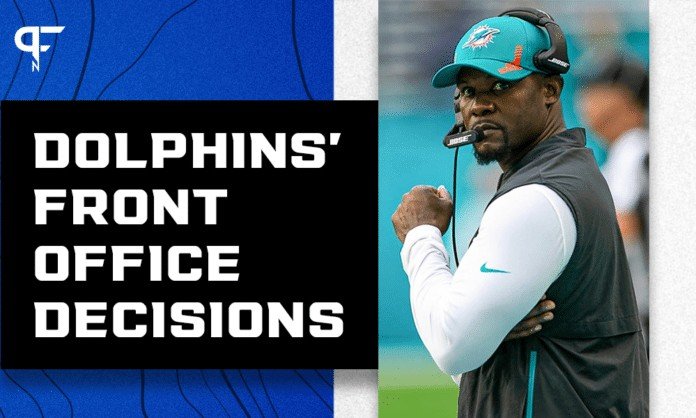 The Miami Dolphins looked horrible in Sunday's 0-35 loss vs. the Buffalo Bills. The front office needs to take the heat for rebuild decisions.

MIAMI GARDENS, Florida — You can draw a straight line from the Miami Dolphins’ draft night decisions to Sunday afternoon’s thoroughly embarrassing result, which — all things considered — is probably the worst loss of Brian Flores’ career.

While the 35-0 whipping at the hands of the Bills wasn’t the largest margin of defeat Flores has suffered as the Dolphins head coach, it was certainly the most clarifying.

The Dolphins, as currently constructed, are not a great football team. They might not even be a good one.

And that’s very bad news three years into a rebuild designed to show real results in 2021. Instead, the Dolphins have actually lost ground in the AFC East. They lost by 30 on the road to the Bills in the 2020 finale. Then, they lost by 35 in their 2021 home opener.

Granted, you’d be forgiven for thinking the game was held at Orchard Park South. Thousands of Buffalo fans were in prime seats at Hard Rock Stadium, and Bills Mafia was loud enough to impact the game.

“Nice to get a win in front of the home crowd,” a frisky Bills social media manager tweeted out an hour after the game ended.

Nice to get a win in front of the home crowd. 😉#WinFromWithin | #BillsMafia pic.twitter.com/U100M0rrhl

A low blow? Perhaps. But the shade was warranted. The Bills and their fans both showed up Sunday. Additionally, the Dolphins have far bigger worries than a little trash talk.

Their starting quarterback, Tua Tagovailoa, left the game early with some seriously sore ribs. Further tests were scheduled for Sunday night and Monday morning to determine the injury’s severity, although NFL Network reports no bones were broken.

But whenever Tua returns, it doesn’t seem Jacoby Brissett will be all that eager to just hand the job back over.

Even after an underwhelming relief appearance — Brissett needed 40 attempts to manage 169 passing yards — he chafed at being called a backup.

“I don’t refer to myself as a backup quarterback,” Brissett said. ” … I’m a starter.”

Maybe for Week 3, when the Dolphins visit the suddenly dangerous Raiders.

But the Dolphins aren’t going to give up on Tagovailoa just 59 snaps into his second season, no matter how uninspiring those snaps have been.

Still, this is an important subplot supporting a broader narrative — Miami’s rebuild has some massive, and perhaps insurmountable, flaws.

Those flaws directly reflect dubious draft decisions made by Flores and general manager Chris Grier since they joined forces in 2019.

The Dolphins gutted the roster in 2019 to ensure they had a treasure trove of premium draft picks. They have made six first-round and four second-round picks in the last three drafts.

And yet, the offensive line is as bad as ever. The quarterback position remains such a concern that Deshaun Watson, and his 22 sexual misconduct accusations, remain a trade possibility. And the Dolphins have been largely outplayed through eight quarters of the 2021 season.

The Dolphins have been outgained by 232 yards, allowed 62.1% of third-down attempts to be converted, have a team passer rating of 65.7, and have surrendered 8 sacks.

Furthermore, they would likely be 0-2 if not for Xavien Howard’s late forced fumble against the Patriots in Week 1.

Tagovailoa hasn’t played well enough through 11 starts, especially compared to Justin Herbert, who was available when Miami picked No. 5 overall in 2020. The Dolphins took Tua over Herbert — that decision looks worse by the week.

Nevertheless, the personnel failures go far beyond that. The Dolphins took Christian Wilkins 13th overall in 2019. His next tackle for loss will be his first in 2021. Brian Burns, Montez Sweat, and Marquise Brown were all available when Miami was on the clock — each has had a more impactful NFL career.

Yet, the 2020 NFL Draft is really where the mistakes happened. Along with taking Tagovailoa fifth overall, the Dolphins selected OT Austin Jackson 18th and CB Noah Igbinoghene 30th.

Jackson, by our count, surrendered 2 sacks Sunday to go with the 4 he gave up as a rookie. He was the fifth-best tackle in a four-tackle draft, and the Dolphins probably reached when they took him due to need. But at least Jackson saw the field Sunday. Igbinoghene was a healthy scratch for the second straight game this year.

An offense that features Herbert, Jefferson, and one of those two running backs would not have been shut out Sunday.

As for the 2021 class, it’s far too early to make any sort of evaluation on Jaylen Waddle (No. 6 overall) or Jaelan Phillips (No. 18). However, it doesn’t look great for Phillips to be largely invisible against the Bills while his ex-University of Miami teammate Greg Rousseau (who went No. 30) recorded a pair of sacks.

To be fair, every team makes draft mistakes. But the good ones make far fewer than the bad ones. And with what they’ve put on the field through eight quarters, it’s risky to consider the Dolphins a good team.