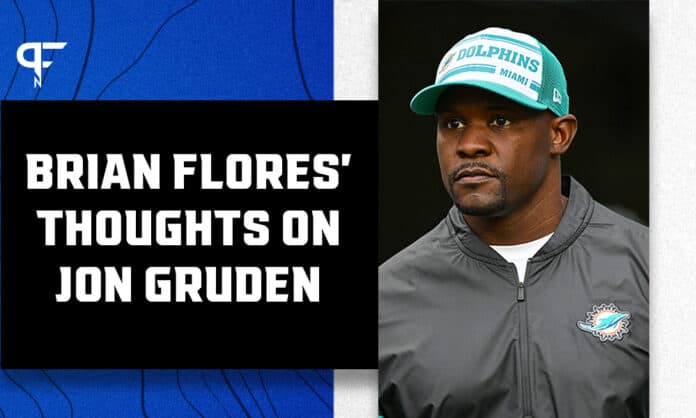 Brian Flores is one of just three Black coaches in the NFL. The Miami Dolphins head coach is also an important voice on race and inequality in America, speaking out forcefully on the death of George Floyd among other significant cultural issues over the last two years.

So his thoughts are Jon Gruden’s bigoted and hurtful emails are important. That’s why we asked him about it Wednesday.

“I think it’s unfortunate. I think football’s a game that, from my standpoint, what I love about the game, is that it brings people together. It really brings people from all walks of life together. You hate to see anything that brings any type of division. At the same time, I believe in forgiveness. I do. I never want to judge someone based on the worst thing they’ve ever said or done. I don’t think anybody here would. I wouldn’t.

The Raiders had seen those emails last Friday but still let Gruden coach in Week 5. They have since replaced him with Rich Bisaccia, who was the team’s special teams coach prior to Gruden’s departure.

Flores spoke to reporters Wednesday ahead of the team’s Thursday redeye flight to London, where the 1-4 Dolphins will face the 0-5 Jacksonville Jaguars on Sunday.

“I’ve always known since I was a little boy that race was a factor. I can go into personal stories and say this or that, but I’m going to go back to my original point: this isn’t really about me. It’s about what’s happening in this country and again, I think we have a situation here where we can actually make some change.

“It’s not often that there is 100% agreement across the board that changes need to occur. Rather than talking about me and my personal situation, let’s put the focus on that and hopefully we’ll make some progress.”