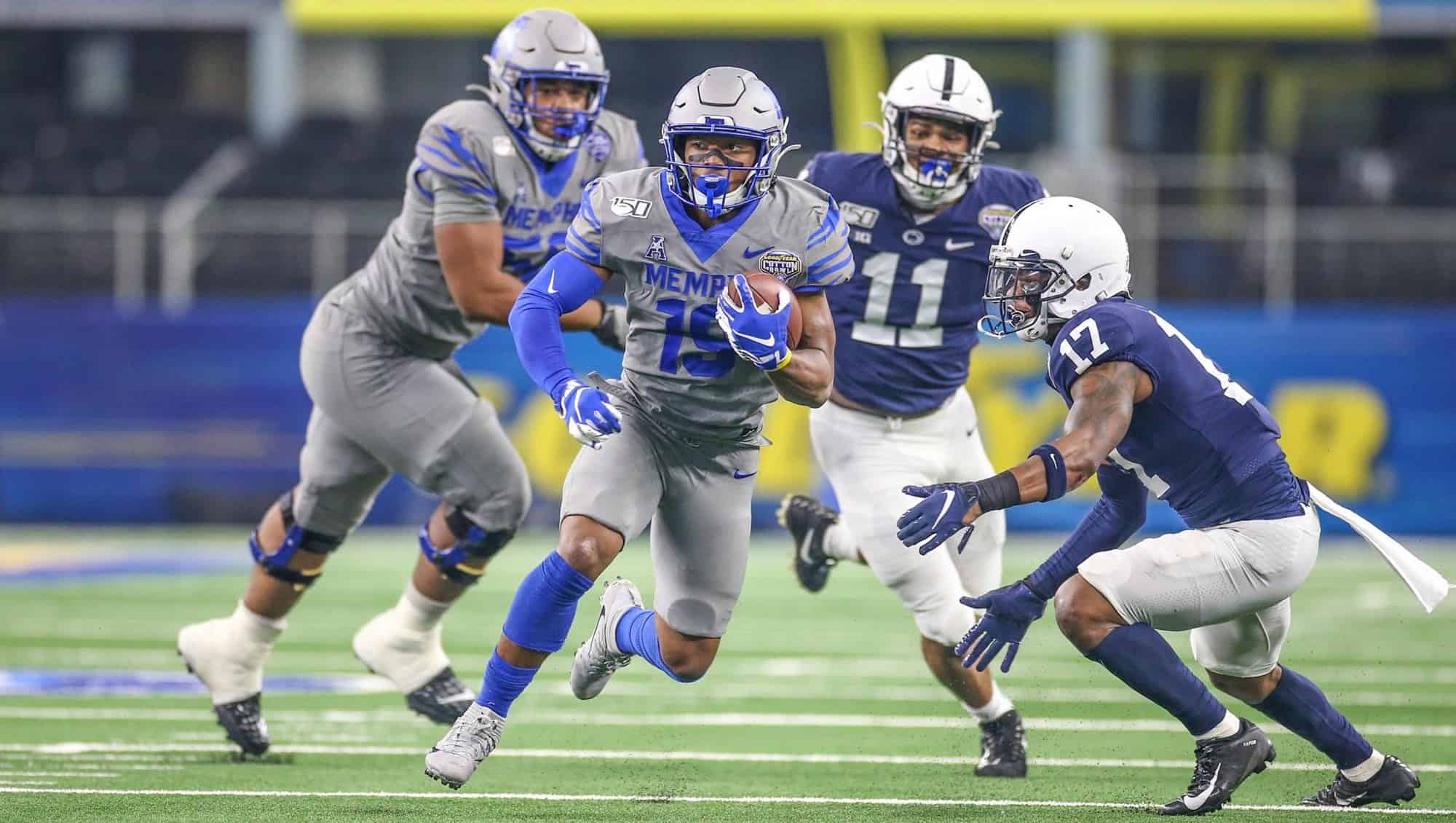 Last season, the Memphis Tigers took the college football world by storm. Coming off a bleak 8-6 season in 2018, the Tigers became a 12-2 heavyweight in 2019. Morphing into an offensive juggernaut under first-year offensive coordinator Kevin Johns, the Tigers ranked seventh in the nation in passing yards, eighth in scoring offense, ninth in passing yards per completion, and tenth in total offense.

In 2020, many of the components remain intact, the stage is set for another high-octane offense. The super-charged unit is expected to be the proving ground for several next-level prospects. The same can be said for the Tigers’ fast-flowing defense, which boasts an array of talent that figures to entice teams during the pre-draft process.

A 2019 Johnny Unitas Golden Arm Award finalist and second-team All-AAC recipient, White led the Tigers to a 12-2 record and spearheaded an offense that averaged 40.4 points per game. The redshirt junior threw for 4,014 yards and 33 touchdowns against 11 interceptions.

Despite losing key offensive contributors such as Antonio Gibson and Joey Magnifico, White will have another diverse set of weapons at his disposal in 2020. Although the 6-foot-3, 210-pound signal-caller lacks the arm strength that many of the nation’s marquee passers possess, and tends to exhibit a risk-averted approach to his game, some attributes suggest that he can be a quality system quarterback in time.

If White is to be among the exclusive class of 2021 draftees, he must manufacture another noteworthy season and bring the ascending Memphis program to new heights.

Starting all 14 games last season as a redshirt freshman, Kenneth Gainwell carried the ball 231 times for 1,459 yards and 13 touchdowns while adding 610 yards and three touchdowns as a receiver out of the backfield. Gainwell’s 2,069 all-purpose yards led all FBS freshmen.

Entering the 2020 campaign on the Doak Walker and Maxwell Award watch lists, expectations will elevate for the 5-foot-11, 195-pound ball carrier. This season, Gainwell will team with junior Kylan Watkins to comprise one of the more explosive backfields in college football.

Gainwell’s unparalleled vision, innate patience, and elusiveness in the open field make him an enticing addition to any NFL offense. Gainwell will likely need to add another 10 pounds to his frame to survive as a three-down running back at the professional level. Still, the redshirt sophomore has the athleticism and versatility that teams covet.

Gainwell is among the nation’s most electrifying talents. If the diminutive running back can  replicate his stellar collegiate debut, he will undoubtedly warrant first-round buzz.

Damonte Coxie doesn’t always garner the accolades and praise of some of his peers, but the 6-foot-3, 200-pound pass-catcher is every bit as talented.

The redshirt senior is coming off of a prolific 2019 campaign in which he played an integral role in guiding Memphis to its first American Athletic Conference Championship. A 2019 second-team All-AAC selection, Coxie reeled in 76 receptions for 1,276 yards and nine touchdowns — becoming the second player in program history to register consecutive 1,000-yard receiving seasons.

Coxie plays to his size and uses his lengthy frame to attack the catch-point and win in contested catch situations. While he isn’t equipped to be a primary vertical threat at the next level, Coxie demonstrates efficient hand usage to disengage at the line of scrimmage and is nuanced enough as a route runner to create separation at the top of his routes consistently.

T.J. Carter is one of the rare cases of a prospect who earned a starting role as a true freshman and never really experienced peaks and valleys over the years.

Named to the 2020 Jim Thorpe Award preseason watch list, the 5-foot-11, 190-pound defender is a productive ball-hawk who possesses the athleticism, savviness, and football intellect to line up anywhere in the secondary. The fourth-year senior is a proven difference-maker.

Appearing in 14 games last season, Riley Patterson converted 23 of 25 field goal attempts — including five of 50-plus yards — 65 of 66 point-after attempts, and yielded 65 touchbacks on 103 kickoffs.

For his career, Patterson has connected on 49 of 61 field goal attempts and 204 of 209 point-after attempts. The senior placekicker holds a career average of 80.3 percent accuracy on field goals.

If Patterson can continue his upward trajectory, he will be the first Tigers kicker to reach the professional ranks since Jake Elliott in 2017.