What does Baltimore running back Mark Ingram’s future look like?

Mark Ingram is coming off a 1,000-yard year, but after the Baltimore Ravens selected J.K. Dobbins in the draft, how long is his future as their starter?

By Nicholas McGee
May 10, 2020
Jump around this article Click to show
Ingram’s OSM decline
Dobbins set to take over from Ingram?
Ingram’s contract

Mark Ingram is the elder statesman of a Baltimore Ravens backfield that was further crowded this offseason, but he believes he has a long future at the highest level. In a recent teleconference, Ingram, per Ravens.com, said: “I feel like I can play this game at the highest level for at least another four or five years. I honestly do. My body feels good, I’m moving good. I have nothing really lagging. If I do, I’m working on it, rehabbing it, strengthening it up so all weaknesses are turning into my strengths.”

Ingram, however, was speaking prior to the 2020 NFL Draft, which saw the Ravens throw a wrench in any hopes he had of playing the next half-decade at an elite level in Baltimore by selecting J.K. Dobbins in the second round.

Though the Ravens, like most teams in the NFL in 2020, look to share the workload among their backs, Dobbins’ skill set and draft status suggest he could soon emerge as the lead guy for Baltimore.

He may have already given his answer, but the question must again be asked; how long of a future does Ingram, who enters the 2020 season at age 30, have left in the NFL?

Despite enjoying an uptick in production in 2019 after leaving the New Orleans Saints for the Ravens, Ingram’s Pro Football Network Offensive Share Metric (OSM) score declined compared to 2018.

OSM uses the NFL’s NextGen Stats and a series of algorithms to measure a player’s contribution to his offense’s production by looking at the factors only he could control.

It is typically tougher for running backs to receive high grades because their production is so reliant on the offensive line and other members of the offense.

That drop-off is perhaps indicative of the Ravens’ reliance on quarterback Lamar Jackson as a running threat. Running behind one of the premier run-blocking offensive lines in the NFL will also have aided Ingram’s cause, and, for all his production in his first season as a Raven, OSM suggests his actual influence on the offense was limited.

Dobbins set to take over from Ingram?

When they invested the 55th overall pick in Dobbins, the Ravens made it obvious they view him as the future at the running back position.

If the Ravens utilize his athleticism and versatile skill set to the same extent Ohio State did, Dobbins will soon have the lead over Ingram in terms of share of the workload.

Dobbins did not test at the NFL Scouting Combine, but a look at his Relative Athletic Score projection from his time in high school gives an idea of the type of athletic specimen the Ravens have added to the backfield.

RAS is a composite metric on a 0 to 10 scale based on the average of all the percentile for each of the metrics the player completed either at the Combine or his pro day. 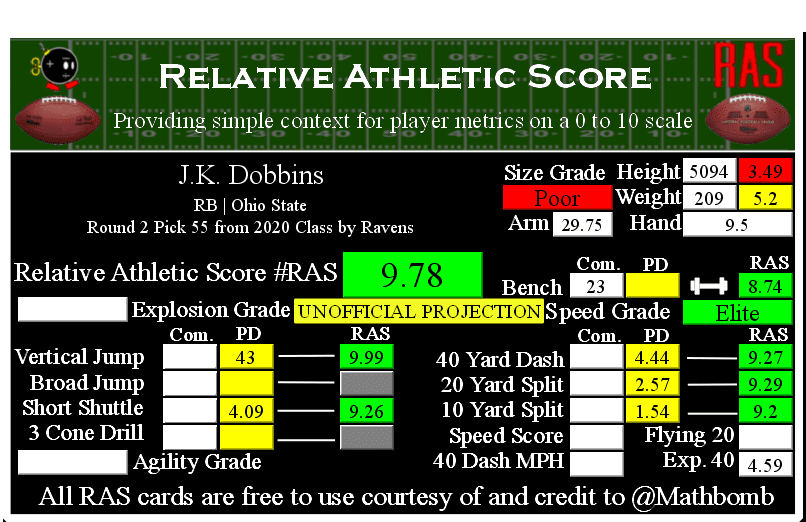 Using his data from high school, Dobbins is projected to have an elite RAS of 9.78. That was reflected in his play for the Buckeyes, which saw him power through tackles, make defenders miss and create separation when running routes out of the backfield.

Dobbins averaged 6.7 yards per carry as he racked up over 2,000 yards and scored 21 touchdowns on the ground for Ohio State in 2019. He caught only 23 balls last season but averaged a gaudy 10.7 yards per reception.

Ingram is not ineffective as a receiver. Quite the opposite actually, he made 26 receptions at an average of 9.5 yards per catch and five touchdowns for the Ravens last year. Yet the greater athletic ability of Dobbins at the age of 21 means he should carry more significant upside in that area of the game, limiting the areas in which Ingram can make an impact if the Ravens give Dobbins opportunities early and often on passing downs as a rookie.

With Dobbins entering the fray, the prospects of Ingram staying beyond 2020 appear slim. The Ravens could save $5 million against the cap, per Spotrac, by cutting Ingram in the 2021 offseason.

That would be a prudent move for Baltimore. Ingram possesses power and burst and can elude defenders in the open field. However, there would seem to be little value in carrying him on the roster when younger and cheaper players can deliver the same production, which is heavily reliant on those blocking up front.

Recent history suggests that it would be no fault of Ingram’s were the Ravens to part company with him. He delivered efficient production for Baltimore last year and showed no sign of slowing down.

However, conventional wisdom says the cliff is coming for Ingram now he has entered his thirties, and that is likely to have been a motivating factor behind the Ravens’ decision to draft Dobbins.

Ingram’s performances, while seemingly not critical to the production of Baltimore’s offense, served to give rise to the notion of him playing at an elite level for the duration of his contract, which ends in 2022.

What Baltimore decides to do next offseason will provide an insight into whether they feel he can maintain that standard for much longer. Running backs generally must accept playing supplementary roles in their thirties, and it will be the Ravens and the rest of the league’s perception of his longevity, rather than his own, that decides how long Ingram has at the highest level.