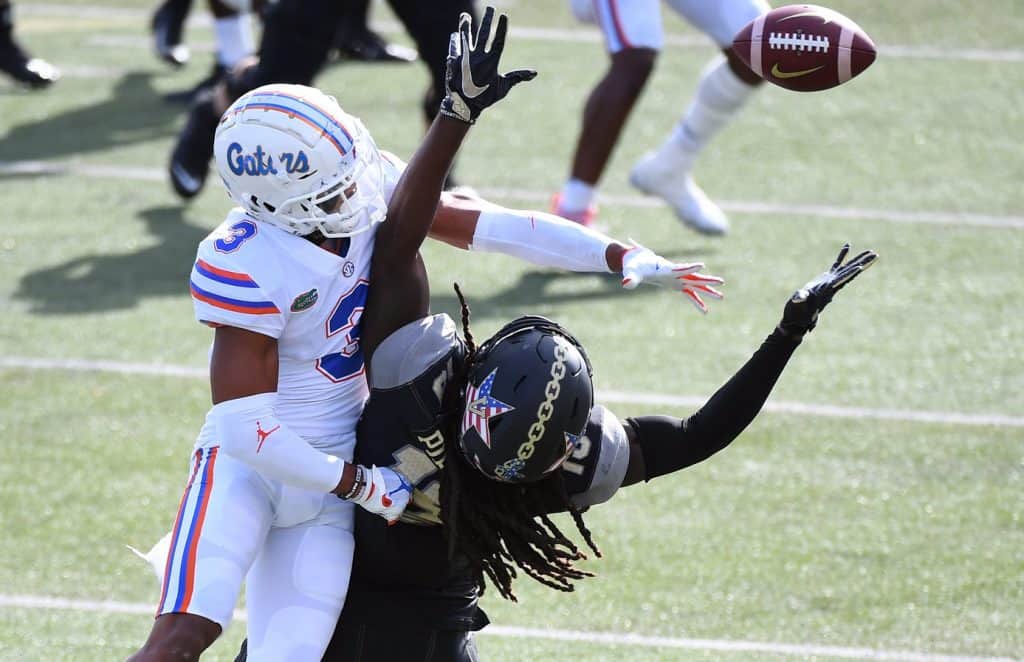 Four years ago, Marco Wilson watched the Indianapolis Colts select his brother, Quincy, in the 2017 NFL Draft. Considered by many to be a better player from high school than his elder brother, the Florida cornerback has had a turbulent college career. What are his odds of being selected in the 2021 NFL Draft?

Positives: Consistent cornerback with a solid game. Displays good awareness, keeps the action in front of him, and takes proper angles to the play. Fires up the field and gives effort defending the run. Aggressive and wraps up tackling. Tracks the pass in the air, displays a burst out of his plant, and dives around the field working to break up throws.

Negatives: Turned in a tremendous freshman campaign in 2017, yet never truly elevated his game afterward. Best facing the action.

Analysis: Wilson is a solid defensive back who can line up in a zone system as either a corner or safety. Playing with an aggressive nature, Wilson can be an asset on special teams and could make a roster as a ninth defensive back.

A product of Florida powerhouse American Heritage High School, Wilson is one of several Patriots players hoping to be selected in the 2021 NFL Draft. They are an exceptional breeding ground for success, as Wilson won two FHSAA 5A State Championships during his time there. Additionally, the school has a reputation for athletic success. Wilson was no exception, securing a 2A State Championship as a track athlete.

Sandwiched in between his success, however, was a missed junior season spent recovering from ACL surgery. Some players are never the same after suffering an ACL injury, but Wilson rebounded as a senior. He logged 20 tackles and 3 interceptions, including 1 returned for a touchdown. His performances saw him named first-team 5A All-Broward and a USA Today All-American.

His senior season ultimately had no bearing on a wild recruiting ride. Wilson received nearly 30 offers as a four-star prospect. He ranked as a top-30 player in the state of Florida and one of the best in the nation . He could have joined American Heritage teammate Patrick Surtain II at Alabama, but he opted to follow in his brother’s footsteps to play cornerback for the Gators.

As alluded to in the introduction, some analysts consider Wilson to be a better high school recruit than his brother. That certainly appeared to be the case as he made an immediate impact for the Gators. He was one of only four true-freshman cornerbacks in Florida history to start on opening day. In doing so, he joined elite company with Joe Haden, Marcus Roberson, and Janoris Jenkins.

Moreover, he would lead the team in pass break-ups (10) while totaling 34 tackles. His performances earned him Freshman All-SEC honors, and the hype appeared to be real. For the second time in his fledgling football career, Wilson saw significant time away from the field. After starting the first two games of the 2018 campaign, an injury suffered against Kentucky ended his season.

Much like his high school career, Wilson bounced back from injury with a bang. Starting all 13 games in 2019, he emerged as a playmaker at the cornerback position for Florida. He snatched his first career interception against Tennessee in the third game of the season. Wilson corraled another two against Auburn and Missouri later in the year. The Florida secondary became almost impossible to throw on, with multiple defensive backs having 3 or more picks.

Although Florida mounted a substantial bid to make the College Football Playoffs, their defense regressed substantially compared to 2019. Despite Wilson playing well, the Gators allowed over 30 points per game. Additionally, a shoe tossing incident involving the Florida cornerback led to a surprise loss to LSU. That started a run of three consecutive defeats that dropped the Gators to an 8-4 record.

As he heads to the 2021 NFL Draft, he’ll be hoping to put that incident behind him.

His first step on that road to recovery was at Florida’s Pro Day. Wilson impressed, flashing the athletic traits that make him a complicated evaluation. He possesses the skillset and athletic ability, but something is missing. The Florida cornerback has the opportunity to be a Day 3 pick come May. He brings versatility as a player who can contribute outside or inside. Also, he has experience playing both zone and man coverages.

If Wilson can pull his positives together, he could be successful in the NFL. On the other hand, there will be questions over not only his injury history but his on-field temperament.

Teams who need to add depth at the cornerback position include the Green Bay Packers, Los Angeles Chargers, and New England Patriots. That said, multiple teams will add pieces to their secondaries at some point in the 2021 NFL Draft.