Madden 23 cover: John Madden featured on cover in a special tribute to a legend

The announcement of the Madden 23 cover will see EA Sports return to its roots, as a legendary figure returns to his rightful place.

By Ben Rolfe
June 1, 2022
Jump around this article Click to show
John Madden to appear on the 2023 cover as a tribute to the legendary figure
A number of athletes might have been in contention for the Madden 23 cover

The announcement of which athlete will grace the cover of the Madden video game is a much-discussed moment, and the cover of Madden 23 will be no different. This year’s cover is a bit different, however. Following the passing of legendary broadcaster and coach John Madden, who was instrumental in the game’s development, EA has announced Madden will appear on this year’s cover. This is Madden’s first time on the cover since Madden NFL 07’s Hall of Fame edition. 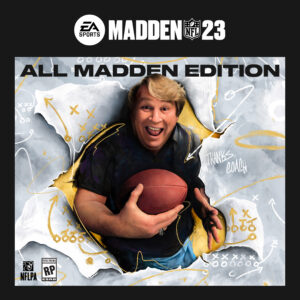 In the early days of the video game, Madden was a regular figure to grace the cover. He appeared on the cover of the first 12 releases. During that time, athletes were often depicted on the cover but in the background, with Madden as the prominent image. However, that changed in 2001 when athletes began to be featured solo on the cover. Madden made a return to the cover for the 2007 game, but only on the Hall of Fame edition.

Madden’s passing during the 2021 season at the age of 85 sent ripples through the NFL. For many, he is still the voice of the NFL, and he is widely respected within the game. Therefore, it was a logical choice for EA Sports to return to its roots and feature him on the cover of Madden 23.

If EA had surprised and gone down the route of featuring a player on the cover, there were a number of potential options. After we saw Tom Brady and Patrick Mahomes on the cover of Madden 22, the “traditional” rule of featuring one player had been somewhat ripped up. That cover made a lot of sense given both had featured as starting quarterbacks in the previous Super Bowl.

Along those lines, EA Sports could have featured two players from the previous Super Bowl again on the cover of Madden 23. Joe Burrow’s rise from relative obscurity in college to a National Championship and the first overall selection is well documented. However, his return from a devastating knee injury as a rookie to lead the Cincinnati Bengals to the Super Bowl is also a feel-good story.

In that Super Bowl, the Bengals faced the Los Angeles Rams, who have their own superstar. Wide receiver Cooper Kupp was voted the Associated Press NFL Offensive Player of the Year last season. Equally, Rams defensive lineman Aaron Donald is a star of the league. He has won Defensive Player of the Year three times and the Super Bowl for the first time last year. Therefore, a cover combining Burrow with either Kupp or Donald could have been an intriguing continuation of the multi-athlete cover.

But all that said, EA made the only choice that made sense. Honoring legendary coach, broadcaster, and the game’s namesake will be very well received by fans of the video game franchise.