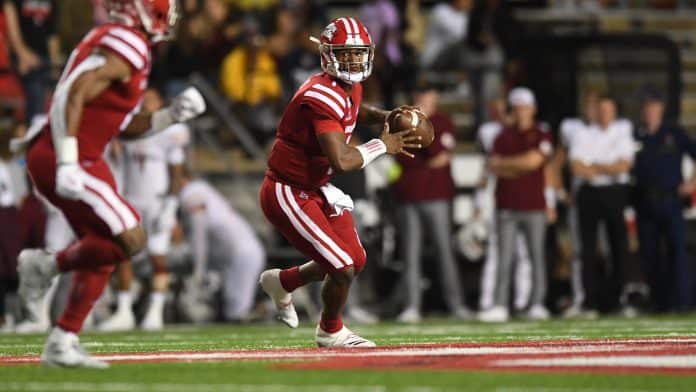 Each year, Louisiana Lafayette quarterback Levi Lewis only gets better. But in 2020, he's not looking back to see how far he's come. He's still chasing greatness. Pro Football Network senior draft analyst Andrew DiCecco has more on one of college football's most tenacious playmakers.

The Sun Belt Conference has a long-standing history of competitive play and churning out next-level talent. Still, the oft-overlooked conference is commonly cast aside in favor of the powerhouse programs currently saturating college football. Ironically, the Sun Belt boasts one of the nation’s most transcending talents at the quarterback position — an immensely gifted athlete with elite physical traits and a rapidly developing skill set. This story chronicles the rise of Louisiana Lafayette quarterback Levi Lewis.

Growing up in Baton Rouge, Louisiana, Levi Lewis immersed himself in sports at a young age to ensure he stayed out of trouble.

“I was a four-sport athlete,” Lewis recalled. “I played football, basketball, I ran track and played a little bit of baseball. Playing sports kept me out of trouble because it’s so easy to get into something and hard to get out of it. Football was really my first love; it took my mind off of everything.”

Lewis originally discovered his passion for football in elementary school, where he cut his teeth as a jack-of-all-trades athlete for the South Baton Rouge Rams. However, after juggling multiple sports throughout much of his adolescence, Lewis knew he needed to dedicate himself to one.

For an encore, athletic signal-caller passed for 2,450 yards and 17 touchdowns while running for 1,577 yards and 23 touchdowns.

While Lewis’ senior season may have cemented his legacy at Scotlandville Magnet, it was his stellar junior campaign that put him on the map.

“My junior year was kind of my breakout year,” Lewis said. “It was a whole new offense, whole new system. After that year, a bunch of scouts hit me up. My biggest offers were Iowa State, West Point, and I had a lot of local schools. LSU wanted to offer me — they wanted me to switch my position to receiver — but I told them I wanted to play quarterback.”

Like most first-year signal-callers transitioning to the collegiate level across the country, Lewis faced a steep learning curve.

While learning the Ragin’ Cajun playbook wasn’t as daunting of a task as one might expect for Lewis, the talented freshman found the finer nuances of the position to be far more challenging.

“Learning the playbook wasn’t as big of a deal,” Lewis explained. “It was more so knowing what were the defenses going to do? How were they going to attack? What were the tactics?”

Initially issued the redshirt designation to start the season, injuries decimated the depth chart and thrust Lewis into duty late in the season. Making his first career start at South Alabama, Lewis completed 8 of 15 pass attempts for 110 yards and two touchdowns and accumulated 129 rushing yards.

Appearing in the final four games of the season, Lewis completed 28 of 54 pass attempts for 377 yards, two touchdowns, and an interception, and added 175 yards and a touchdown on the ground.

Although Lewis stepped in and executed the offense relatively well over the final month despite the circumstances, the young quarterback identified areas of improvement that helped transcend his game.

“My main thing was, learning more about coverages,” Lewis said. “It helped me anticipate and know where guys are going to blitz me from. I tried to learn as much as I could after that season because I knew that’s where I struggled.”

Following an offseason of refining self-proclaimed deficiencies in his game, Lewis used those four games as a springboard into a sophomore season brimming with optimism. Although he emerged from fall camp as the runner-up to senior Andre Nunez in the spirited quarterback battle, Lewis rotated in every fourth series throughout the season.

Appearing in all 14 games, Lewis completed 37 of 59 pass attempts for 585 yards, seven touchdowns, and two interceptions. Despite limited action, Lewis produced a season-high two-touchdown effort in the season-opener against Grambling State and increased his passing yards per attempt by nearly three yards.

While he played sparingly behind Nunez as a sophomore, Lewis developed a profound appreciation for every drive he had a hand in.

“It really helped me value football at another level,” Lewis said. “It taught me patience, it made me more disciplined, it had me more focused — it just brought me to another level.”

Lewis, who spent the better part of his first two seasons preparing for his opportunity to lead a football team at the college ranks, entered the 2019 campaign firmly entrenched as the Ragin’ Cajuns starting quarterback.

The 5-foot-10, 190-pound signal-caller started all 14 games for Louisiana Lafayette, completing 243 of 378 pass attempts for 3,050 yards, 26 touchdowns, and four interceptions, in addition to 195 rushing yards and three touchdowns. His signature performance, however, came when the chips were down.

In the Sun Belt Conference Championship Game against Appalachian State, Lewis enjoyed a career day. Lewis completed 46 pass attempts and threw for a career-high 354 yards and four touchdowns in an offensive explosion. Despite Lewis’ heroics, however, the Ragin’ Cajuns fell to the Mountaineers, 45-38.

”It’s all about keeping your poise through and through,” Lewis said. “Not getting too high, not getting too low. Trying to stay calm. The game is about inches — it can change in a matter of seconds. There were ups and downs, and we started so slow. We didn’t get going until the second half. The lesson from that game: You gotta start fast and finish strong.”

Lewis finished the 2019 season ranked 17th nationally in passing efficiency (152.6), and he became the first player in Louisiana Lafayette history to throw for over 3,000 yards in a single season. Additionally, his 26 touchdown passes were the most by any passer in program history.

The Ragin’ Cajun offense lost two of their most dynamic offensive weapons to the professional ranks in wide receiver Ja’Marcus Bradley and all-purpose running back Ray Calais. Unfazed by adversity, Lewis remains focused on the task at hand.

“Just pick up where we left off, and go ten times harder,” Lewis retorted.

Lewis is one of college football’s best-kept secrets. The electrifying dual-threat quarterback is among the nation’s elite, but gets largely overlooked due to his stature and perceived inferior level of competition.

In addition to his innate leadership — he’s on Louisiana Lafayette’s eight-person leadership council — Lewis boasts an unparalleled work ethic and a burning desire to perfect his craft. On the field, Lewis’ improvisation and ability to extend plays sets him apart from many of his counterparts. Although he doesn’t possess prototypical size, Lewis’ quick release, ability to scan and read coverages while keeping his eyes downfield, and profound understanding of situational football are inherent positives.

“There’s a lot of things that are my strengths,” Lewis acknowledged. “But I want to talk about my weaknesses. I want to get better at the deep ball and focus on taking care of the ball more.”

With a steadfast mentality and an inexorable commitment to excellence, it’s only a matter of time before the Sun Belt standout makes national waves.